The 2020/21 Greene King IPA Championship Fixtures Have Been Confirmed

The 2020/21 Greene King IPA Championship Fixtures Have Been Confirmed

Fixtures for the belated 2020/21 Greene King IPA Championship season have been announced, with the Cornish Pirates scheduled to welcome Saracens to the Mennaye Field on the opening weekend in March.

Following loan assurances from Government as part of the Winter Sports Survival Package, 11 Greene King IPA Championship Clubs have elected to invest in Covid testing under the elite sport guidance framework to allow a start to the season.

Operating under the elite sport framework, teams will play each other home or away producing 10 competitive matches over 11 league rounds. This will be followed by a two-leg play off final (home and away) between the top two placed teams in the league to determine which will earn promotion to Gallagher Premiership Rugby for the 2021/22 season.

London Scottish felt unable to participate this season but will return for 2021/22. As a result, there will be one bye week per team and three reserve weekends (3/4 April, 8/9 May and 5/6 June) during the season.

Richmond secured a place in rugby’s second tier after finishing at the top of National League One at the end of the curtailed 2019/20 season. The club will face Hartpury University RFC away in the opening round.

As mentioned above, Saracens kick off their Greene King IPA Championship season away against Cornish Pirates who finished last season in third position.

Newcastle Falcons regained its place in the Gallagher Premiership by finishing top of the table ahead of second-placed Ealing Trailfinders, who travel to Nottingham for their opening round match.

Elsewhere in the competition Ampthill, who finished their first season in the Greene King Championship in fifth position, are at home to Doncaster Knights;
Coventry host Bedford Blues at Butts Park Arena and Jersey Reds have a bye week.

Given the possibility of no crowds being allowed for some of the season and wishing to take Greene King IPA Championship rugby to a wider audience, it is hoped to stream as many of the matches as possible (further details from the Cornish Pirates to be confirmed).

At present, with just the weekend dates for fixtures listed, the clubs will now look at the logistics around travel with Covid rules and restrictions before confirming the actual days and kick-off times.

Also, for the present, please note the following:

For regularly updated information about the Cornish Pirates, including fixtures, please visit www.cornish-pirates.com 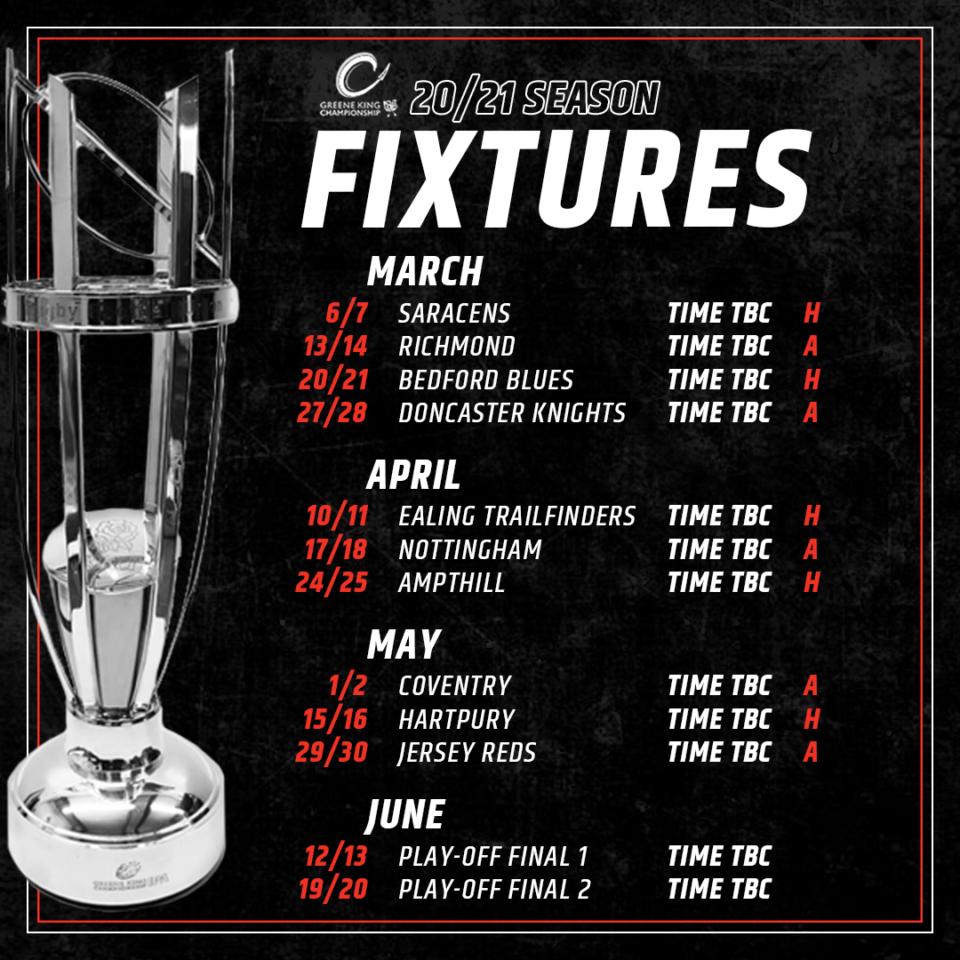