Pirates Support for a ‘Genius Idea’

Pirates Support for a ‘Genius Idea’

What has been described as a ‘genius idea’ by a member of staff at a GP centre in Penzance, has led to the country’s first drive-through blood test clinic at a coffee shop.

The special service at the Costa Penzance Drive-Thru at Eastern Green worked well when given a test run on Tuesday, with Cornish Pirates rugby personnel volunteering to help with queuing traffic and social distancing.

St. Clare Medical Centre in Penzance have to carry out regular blood tests on a large number of patients in West Cornwall who take the blood clot busting drug, Warfarin. However, they had concerns about how best to carry out the regular pin prick blood tests during the coronavirus crisis while following the lockdown and social distancing rules.

We carry out a lot of blood tests on a lot of people and wanted to reduce the risks at this difficult time. Then our advanced nurse practitioner and partner, Tracey Hembrough, came up with a genius plan … we had been thinking of setting up a gazebo outside the practice to act as a kind of drive-through, but Tracey said, why not use an actual drive-thru?

They got in touch with the manager of the Costa Penzance Drive-Thru at Eastern Green via Facebook, who readily agreed to help following its closure and the branch’s staff being furloughed.

Costa’s regional manager immediately gave the company’s full support to the novel blood clinic idea and on Tuesday the manager and assistant manager of the branch – the busiest in Cornwall – opened up and turned off the alarms, before nursing staff arrived, kitted out in face masks.

More than 50 patients drove up, gave their name and date of birth, stuck out their hand, while a nurse carried out a pin prick blood test. As Dr Boulter added:

The procedure is due to take place twice a week, initially with patients from St. Clare’s three practices but then extending to other GP surgeries in Penwith.

Commenting with reference to the presence of Cornish Pirates, Dr Boulter explained:

We’ve had big queues at the St. Clare Pharmacy and after waiting an hour some people have been a bit teasy with staff. Simon (Edwards), the Pirates’ physio, offered to help and some of the players have been marshalling the queue in shifts while wearing high vis jackets. It has really proved its worth and everyone queues nicely now.

With rugby having been wound up a few weeks ago, I had contact with Matthew and asked him whether there was anything I or we can do to help out. The reply, initially, was could we help at the pharmacy at St. Clare, which we have done by marshaling the queues and encouraging people to keep to recommended social distancing. In trying to help keep the public, the pharmacy staff and ourselves safe by voluntarily providing a worthy service, it has worked well.

There is also a feeling that by having young fit and conscientious guys present it reassures people, therefore we have been delighted to extend this to the Costa Drive-Thru temporary blood test clinic – including politely turning away people who think it is open still for a coffee!

We will also be looking to support other initiatives and indeed anything else in whatever way we can in support of the community.

I think this could be one of those things that starts at the beginning of the line in Penzance, and then proves its worth to go further up the country. 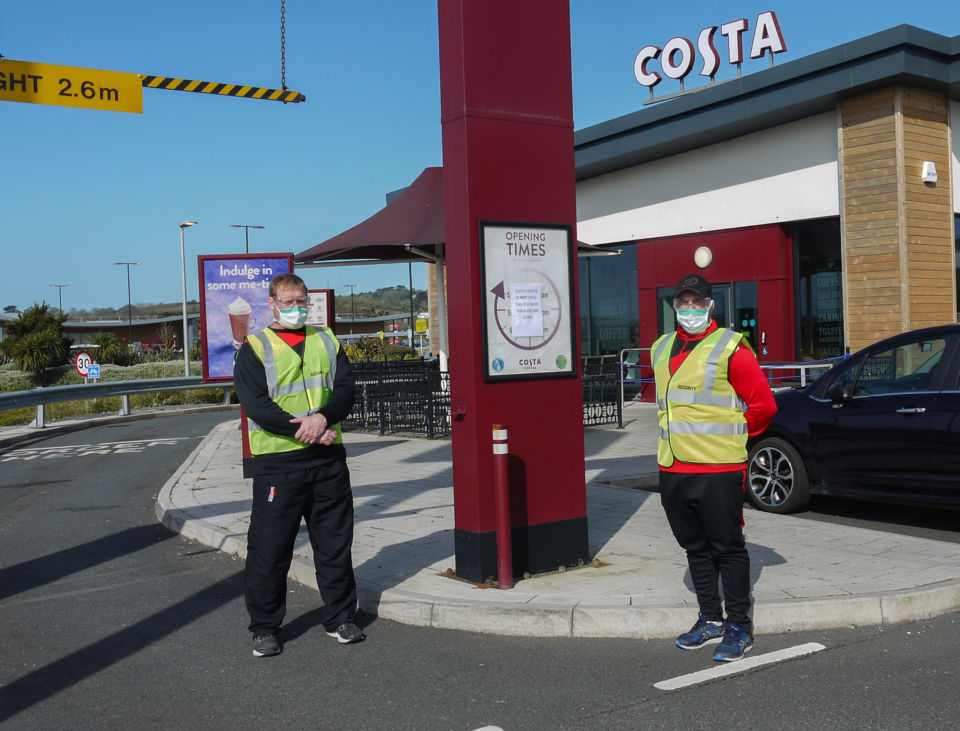