In one of my recent weekly ‘Logs’ I looked back to Saturday 3rd March 2007 when a last-gasp drop-goal from James ‘Jimmy’ Moore helped fire the Cornish Pirates into the last four of that season’s EDF Energy National Trophy competition. 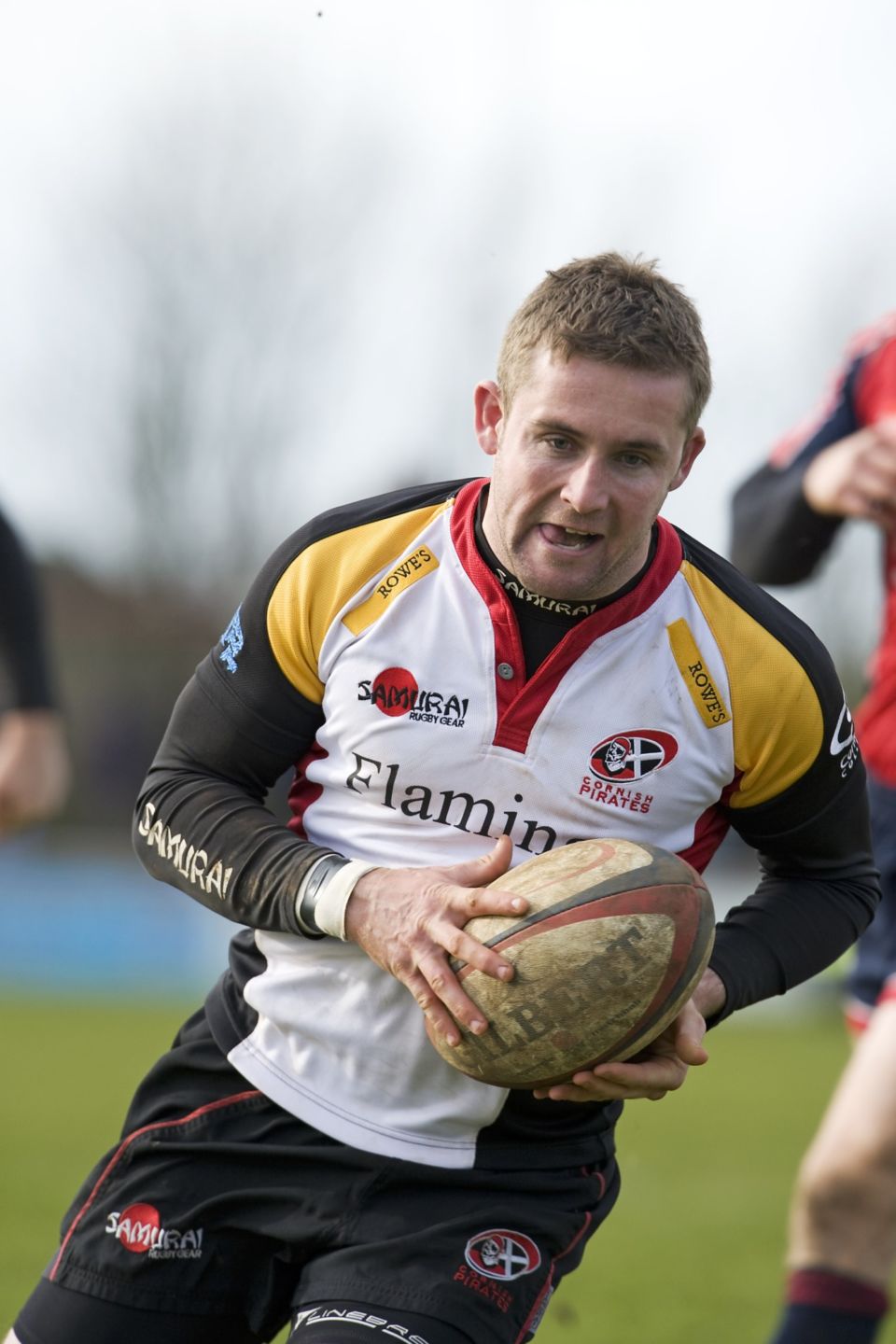 When the Pirates beat Leeds Tykes at the Headingley Carnegie Stadium in Round 5 of the EDF Energy National Trophy competition, the match ending in dramatic fashion on a bitterly cold and snowy evening, the mood was deservedly celebratory and euphoric.

Weekend enjoyed, and rightly so, come Monday the focus of anticipation concentrated on the quarter-final draw. Who would it be? Having travelled to Leeds for the most difficult tie in the last round, all hoped for a home draw, but no such luck. Doncaster away, back to Yorkshire again, the Knights given their chance to exact revenge for having narrowly lost both league encounters against the Cornish team this season.

The ingredients were clearly there for a titanic clash between two good sides, for the Pirates it vital that they picked themselves up following the huge disappointment of having lost the derby encounter at Exeter Chiefs the previous week.

Sunny and spring-like, a complete contrast to conditions in their last round, the Pirates side and their supporters also felt a little more at home at Castle Park with the musical intro ‘Sandstorm’ welcoming the team onto the field.

Their line-up showed three changes from the one that started against Exeter, wing Lewis Vinnicombe and prop Sam Heard replacing Jonny Hylton and Dan Seal, both of whom were on the bench, with James Moore a late call up for injured fly-half Alberto Di Bernardo, who was rumoured pre-match to have signed for Leeds Tykes next season.

Defending the clubhouse end of the ground, and with a St. Piran’s flag flying suitably above the Pirates dug out, when the match began it had a certain intensity about it, each side jousting for dominance, and both willing to move the ball wide on a drying out sanded pitch.

Potentially influential players early on were Tim Cowley, both at line-out and in the loose for the Pirates, and fly-half Mark Woodrow for the home side. Play was frantic and thrilling to watch, but in the ninth minute referee Mr. Dale Newitt penalised the Pirates when hands were spotted dabbling in a ruck, Woodrow kicking the penalty from thirty-three metres to put Doncaster 3-0 up.

The Pirates endeavoured to storm back immediately, Moore already looking willing and assured to stake a claim for the number ’10’ jersey. The top points scorer in National 1 last season, but only a bit player since joining the Pirates, was showing a pretty good repertoire – kicking well out of hand, showing a willingness to try and break the gain line with his running skills, with him also distributing the ball cleverly to colleagues primed to receive passes on various running lines. Indeed, when Iva Motusaga was put into space the flanker took play to within five metres of Doncaster’s line, him only stopped when livewire scrum-half Ben Jones scurried back to make the tackle.

The Pirates maintained an open approach to the game with Cowley, centre Duncan Bell and wing Rhodri McAtee playing leading roles, but Donny’s defence was up for the challenge and did well to repel a Pirates onslaught.

Off the field supporters from both sides raised sound levels with their own versions of ‘Oggy, Oggy, Oggy’, the Cornish crew refusing to be silenced.

With the pressure of the occasion mistakes were bound to occur, players from each team guilty of knock-ons at crucial times, and the Pirates grateful for one adjudged against Doncaster just after full-back Anthony Carter was hauled down just a metre from the Pirates line.

Kicking from hand by Moore and full-back Adryan Winnan eased the Pirates upfield, further territory then acquired through the bulldozing runs of hooker Viliami Ma’asi and prop Alan Paver.

Into first half stoppage time the Pirates were again under the cosh, this a stage when it was vital not to leak a second score. Their resilience and determination to give nothing away was exemplified by lock Heino Senekal for a try-saving tackle on the right, him then conjuring up a relief providing line-out steal right at the very end of the first forty.

On reaching the interval it was incredible within the context of the game that just three points had been scored, there plenty of flirtatious flow shown by both sides, and continued by Moore who was promptly high tackled for his endeavours just three minutes into the second half. A penalty offered the chance of reward, the stand in for Di Bernardo punishing Doncaster as his kick levelled the scores.

Pirates supporters were delighted, but for the next twenty minutes plus the Knights took all but full control. They pressed deep into the Pirates half, forcing their opponents to defend desperately left and right, No. 8 Russell Earnshaw their driving force and replacement flanker Netani Talei making an impact.

A sudden break in play allowed centre Ben Gollings to cunningly parlez with Davies, but what was the plan? On resumption of play it was there to see, Gollings’ midfield partner John Cannon proving a thrustful force in a move finished off by Davies who drifted across from the right wing to score to the left of the posts. Woodward added the conversion, and with it now several minutes into the last quarter the Pirates were staring defeat in the face. Seven times this season Doncaster had kept their line intact, and they were looking charged to make that figure eight.

The Pirates, however, had different thoughts, it remembered that they had lifted themselves to come back and beat Doncaster twice already in the league this season, their response such that they were keen for a repeat performance.

On making a rare second half incursion into Doncaster’s ’22’, a second of two catch and drive efforts, with the throw to Cowley at the back, offered a chance for a try near the posts. Edging their way to the line the pack had to keep tight control, the end result a stunning blow to silence the home crowd. That man Ma’asi, a machine-like burrowing mole who has become truly potent when getting a sniff of the line, notched up his eighth try of the season, converted by Moore to make it 10-all.

Morale lifted for the visitors, Donny were soon in further trouble when Gavin Cattle, in fine form as ever as skipper, lofted a high ball which was suitably knocked on to give the Pirates a scrum thirty-eight metres out on the left. At the put in Tongan international prop Ngalusele Tau was penalised, offering Moore a penalty chance at goal, but his attempt flew just inches wide of the right post.

Maintaining the momentum Cowley and blindside flanker McKeen pierced the heart of Doncaster’s defence, the ball held sensibly to set a platform from where Moore was already positioning himself in a frame from where a drop goal opportunity looked on. Would it be the seen but not heard call? Yes – Cattle to Moore and bang, there never a doubt that the beautifully timed effort would fly straight and over the bar from nearly forty metres out. It was definably Moore’s moment, the all-important score denting the Knights armour beyond repair.

For the second time in less than a month the Pirates had been forced to plot a course up north, both successfully historic expeditions, their deserved reward this time a place in the semi-finals of the competition.

Added comment:
This was, of course, a truly memorable victory. Now, not one noted for displaying my emotions it was also an afternoon when I left my composure slip – by not only being seen to celebrate in ultimately comical circumstances, but also for Radio Cornwall listeners back home to immediately hear about it. Why? Okay, I was sat comfortably in the media seating when Jimmy landed his all-important drop goal, at which point I rose in celebration and punched the air – only to afterwards land flat on my backside when I attempted to sit down again! The flip seat had stayed up, and with Radio Cornwall commentators Mark Stevens and Robin Turner sat immediately behind me, they understandably couldn’t help either laughing or broadcasting the incident to listeners back home. Hey, it didn’t bother me, as most importantly the result was ours!