When the Cornish Pirates play Hartpury at home on Boxing Day (ko 5pm), in the warm-up they will be wearing a special one-off designed rugby shirt that has been made available through Whirlwind Sports.

The shirts to be worn will mark the 40-year anniversary of the RNLI Penlee Lifeboat Disaster, that so sadly occurred on Saturday the 19th December 1981, when in terrible conditions that evening all eight brave crew members of the Penlee Lifeboat “Solomon Browne” were lost as they went to the aid of the motor vessel “Union Star” in trouble off Tater Dhu.  Eight people aboard that ship also perished.

It was an event that will forever remain in the memories of numerous people in Cornwall, and far beyond, who were simply stunned. Indeed, come the Monday it was no surprise that news of this major tragedy had spread not just throughout Britain, but many parts of the world, and money for dependants through the official ‘Penlee Lifeboat Disaster Fund’ poured in by the thousands.

The response from the public was sincere and wonderful, with the rugby community also playing their part. At the Pirates, in liaison with Mike Jenkin, Jack Tonkin (our President) and others we would arrange a match that took place at the Mennaye Field on Wednesday 30th December between Cornwall and a Pirates President’s XV.

Before the game everyone stood for a minute’s silence, and then Bill Bishop, Secretary of the Cornwall RFU, kicked the game off. Among the spectators were relatives of the lost Penlee men. John Blewett, a member of the crew, whose funeral took place the following day, had played for the Pirates and as a stalwart had skippered the third team for several seasons.

The fact that the county won 30-23 mattered not, as more importantly a worthy sum of £1,100 was raised for the disaster fund.

Another outstanding example of rugby community response had a link to then then touring Australian ‘Wallabies’. Only a few weeks earlier their manager Sir Nicholas Shehadie had visited our clubhouse along with certain leading tourists. Nick himself had first visited as a Wallaby player back in 1947, and those he brought with him in 1981 were Mark Loane, Greg Cornelson and Mark Ella.

In response to the disaster appeal skipper Mark Loane would send his tour blazer to be auctioned, to suitably help raise funds. This was organised and we were fortunate that the highest bidder requested that we keep the blazer, which is still prominently on display in our clubhouse. The Australian touring team had also sent a most generous cheque to the appeal

Neil Brockman, son of Nigel and then aged 17, got to the lifeboat station on time, but was turned down for the trip by Trevelyan, who was reluctant on such a night to take out two members of the same family.

Ahead of the Cornish Pirates game versus Hartpury on Boxing Day, squad members Danny Cutmore, Ruaridh Dawson, Alfie Petch, Alex Schwarz, Cory Teague, and Bear Williams have been photographed wearing the special edition shirts. Cornish Pirates’ media officer Phil Westren, who was the RNLI Penlee Branch’s Station Administration Officer at the time of the disaster, also spoke to them of the period and how a mix of circumstance and the elements conspired against those who lost their lives. Phil then introduced them to Neil Brockman, a former Coxswain of the Penlee Lifeboat, who is pictured meeting the Pirates players, as is Paul Billing from Whirlwind Sports.

During pre-match hospitality at the Hartpury game, there will be a Silent Auction for two of the shirts, both signed by Neil, whilst the remaining shirts will afterwards be available to bid for via the Whirlwind Sports website – https://www.whirlwindsports.com/

Already, from sales of the shirts generally through Whirlwind Sports, the sum of £5,000 has been raised for RNLI Penlee Branch funds, which is a fantastic amount.

It has rightly been said many times, with added importance in this anniversary year, that the crew of the “Solomon Browne” will never be forgotten. 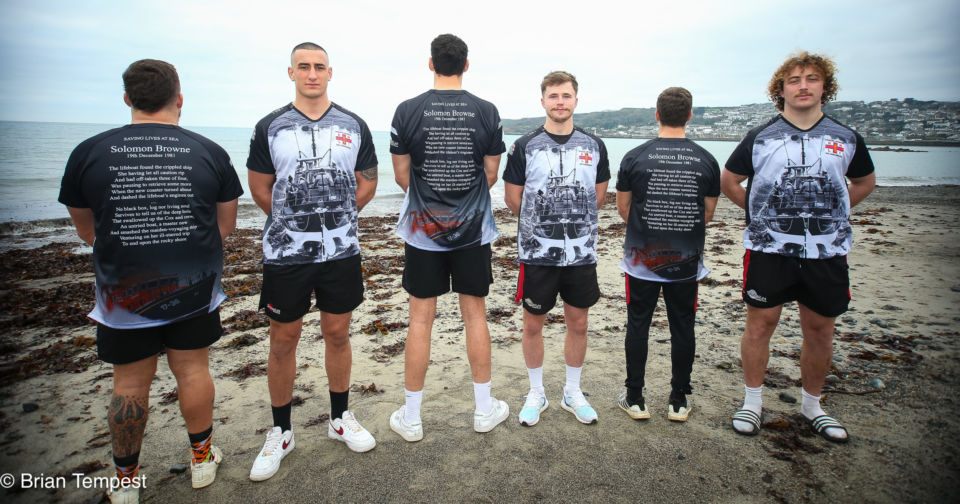