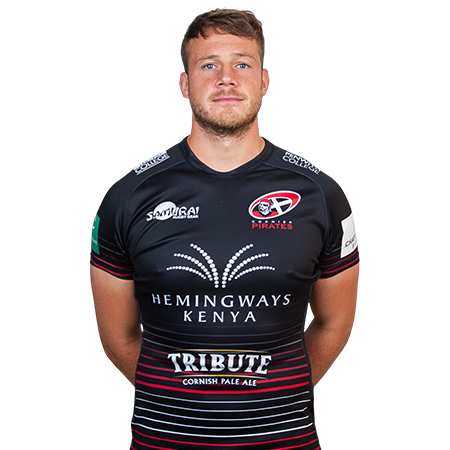 Rarely do Pirates v Blues games disappoint and this one was no exception. But boy did the hosts have a battle on their hands-as the Blues seemingly insisted on playing with only fourteen men. The ensuing ‘Game of Two Halves’ consequently proved to be gripping stuff. Another fine advert for The Championship…

In fairness – the early binning of Dean Adamson in only the 16th minute – was somewhat harsh. True they had their noses in front,courtesy of Pat Tapley’s converted try just beforehand – that had cancelled out Arwell Robson’s in the first ten minutes. But surely Bedford’s free scoring exploits to date this season, would be cancelled out by the league’s meanest defence?

Nah. If anything it encouraged the visitor’s to use this extra space within their own ranks, to their own advantage. The hosts’ skipper, John Stevens, had also gone off injured – his influence clearly missing just when it was badly needed. But not before the Cornish side initially threatened to press home the one man advantage.

With the Bedford wing barely having taken his seat in the sin bin – Robson had plonked the ball into the corner. The catch and drive was expected and swiftly delivered hooker, Tom Channon, for the first of his brace. With the help of some hovering backs. Obviously. But any thoughts of the hosts kicking on, were as quickly erased – as the game went off on one.

The result was rather worryingly for the home crowd – a Pirates defence in disarray and making their opponents task easier than it should have been perhaps. An almost carbon copy second score for the visitors duly arrived – this time for former Pirate, Alex Day, in the opposite corner. Just as well Will Maisey’s exploits from the tee weren’t quite there at this point.

There still a sense that anything could happen. And it did.

The half hour mark still hadn’t been reached and with Bedford pressing – a routine 22 drop out for the Pirates went Pete Tong. Second Row Alex Woolford capitalised and trotted casually under the Newlyn End posts to restore the lead for his team. More importantly, Adamson was back on and numbers were again even.

Hog’s second dot down maintained that carbon copy feel to proceedings and yet – from the restart – Piratical nerves in defence were still frayed. The restart handing Bedford an attacking lineout on the home 22. A game changing moment potentially – but not a predictable one. As if.

Bedford’s lock, Jordan Onojaife and his opposite number, Danny Cutmore emerged from the set piece clearly at odds with each other. When the Blues’ man lashed out and fist connected with the Pirate’s jaw- we knew there would be sanctions. And so it was that Sir’s judgement decreed – Jordan would sit out the rest of the game. Whilst Danny could return just after the break.

It would tell for sure. But not until the final quarter. In the meantime Bedford tails were still up – and Adamson’s score just before the break not only nailed on their bonus point – but exposed still gaping holes in the Cornish defence. Half time was a welcome break therefore – more so when you considered Maisey’s missed seven points with the boot.

The second period by contrast realised twenty one unanswered points for the Cornish Pirates. Although this would belie the fact that the third quarter at least – would continue in very much the same vein as the first. More so when you consider that Bedford could so easily have added a fifth try as it neared the hour mark.

A penalty and kick for the corner saw a Blues’ maul cross the line and seemingly achieve just that. Instead it was the Pirates that emerged from behind their own posts and – not only clear their lines – but take play all the way back up to the Bedford 22. True – the hosts were actually ahead by a single point at this time, courtesy of a third Pirate try by centre, Joe Elderkin – but it marked the point where Bedford’s challenge finally went into decline.

The final quarter therefore belonged wholly to the Cornishmen. Finally they could sense the win and so consolidate their second spot in the Championship table.

Two tries inevitably followed – for Rory Parata & Syd Blackmore – in the final ten minutes. The latter no doubt breathing a sigh of relief as his return from injury looked doomed soon after his introduction. Thank heavens for a lot of magic strapping eh?

Job done for sure – but with the proviso that next week’s encounter with Jersey, will be equally challenging if the errors of today are not addressed.