Tom Lawday is Named in the Championship ‘Dream XV’

Cornish ‘Pirate’ Tom Lawday, who is dual-registered with Exeter Chiefs, has been named in this season’s Greene King IPA Championship ‘Dream XV’.

“Playing his first season in the Championship we were told Tom was a special character and a special player, so for him to come down from Exeter and buy into what we are doing and play the way he has is a fantastic achievement.

“Although happy anywhere in the back-row, he is a terrific No. 8, and his selection is richly deserved. We are over the moon for him and everyone at the Pirates will be pleased.”

Besides Tom, Kyle Moyle was in close contention for one of the wing berths, as at prop was Marlen Walker.

Overall the total number of clubs represented in the Dream team is six, with seven players selected from champions Bristol.

The full selection is as follows:

2. Jimmy Stevens (Nottingham Rugby). Considered one of the best defensive players in the division and consistently excellent in his set piece work all season. Bedford’s Bristol-bound hooker Tom Lindsay came a close second.

3. Jake Armstrong (Jersey Reds). Immensely strong tight-head who, like Woolmore, has earned a move to Bristol next season. Cornerstone of the Reds’ pack who was pushed all the way by soon-to-be Bristol team-mate, Lewis Thiede of Ealing Trailfinders.

4. Barney Maddison (Ealing Trailfinders). Incredibly hard-working player whose worth to the team knows no bounds. Maddison has all the attributes you want from a second row: he is good in the set piece, carries hard, makes his tackles and has excellent game understanding.

5. Chris Vui (Bristol Rugby). Samoa’s captain during their autumn internationals did enough in his seven league starts for Bristol to warrant five votes. An extremely influential player until laid low by a season-ending injury at the end of January.

6. Steven Luatua (Bristol Rugby). Powerhouse All Black who lived up to his big-name reputation. While only captain for three of his 13 starts Luatua’s leadership qualities came to the fore throughout the campaign until injury struck against Jersey. Just shaded Ealing’s Kieran Murphy on the blindside.

7. Dan Thomas (Bristol Rugby). Brilliant breakdown exponent who won a constant supply of turnover ball for his side. Was just as good on the ball as he was over it, providing the link between forwards and backs with his pace around the park.

8. Tom Lawday (Cornish Pirates). Dual-registered with Exeter Chiefs, Lawday has been a virtual ever-present for the Pirates this season. Possesses good footwork and agility for such a big man enabling him to find the weak shoulder of an opponent and consistently get over the game line.

9. Rhodri Williams (Bristol Rugby). Quick silver scrum-half whose darting breaks often led to him scoring tries or setting up team-mates. The Welshman was pushed all the way by his replacement at Bristol next season, Hartpury College’s Harry Randall. Lee Dickson also came close to making it a family double, brother Karl having been a Dream Team member in 2008/09 while also with Bedford.

10. Ian Madigan (Bristol Rugby). Got the back line moving at every opportunity with his ability to fire out bullet-like miss-passes. Consistently excellent off the kicking tee too, breaking Jason Strange’s club record for conversions in a league season.

11. Dean Adamson (Bedford Blues). Another prolific try-scoring campaign for the fleet-footed Blues flyer who nipped into the side ahead of Kyle Moyle and Tom Pincus. With sensational pace, a mean step and impressive control, the 24-year-old struck fear into the heart of defences.

12. Michael Le Bourgeois (Bedford Blues). The Blues’ skipper demonstrated sensational leadership qualities on and off the pitch as well as constantly putting his body on the line for the Bedford cause. At the heart of every attack and always willing to put in the big hits, his contribution has been immense. Bagged eight votes.

13. Piers O’Conor (Ealing Trailfinders). One of those ‘x-factor’ players who can make something happen out of nothing with his electric pace and elusive running. His ability to break the tackle set up many an Ealing attack. Makes the move from West London to the West Country in the summer.

14. Luke Morahan (Bristol Rugby). Natural born finisher who always finds a way over the try line. Reads the game so well and is defensively strong too. Arguably Bristol’s ‘find of the season’. Became only the sixth player in the club’s league history to score four tries in a match when he helped himself to a ‘double-double’ against Doncaster.

15. Jordan Williams (Bristol Rugby). Enjoyed a new lease of life under Pat Lam after a quiet debut season in the Premiership. Bamboozled many an opposition defence with his mesmerising runs from deep. The king of the counterattack joins namesake, Rhodri Williams, in swapping Bristol for Newport Gwent Dragons this summer. 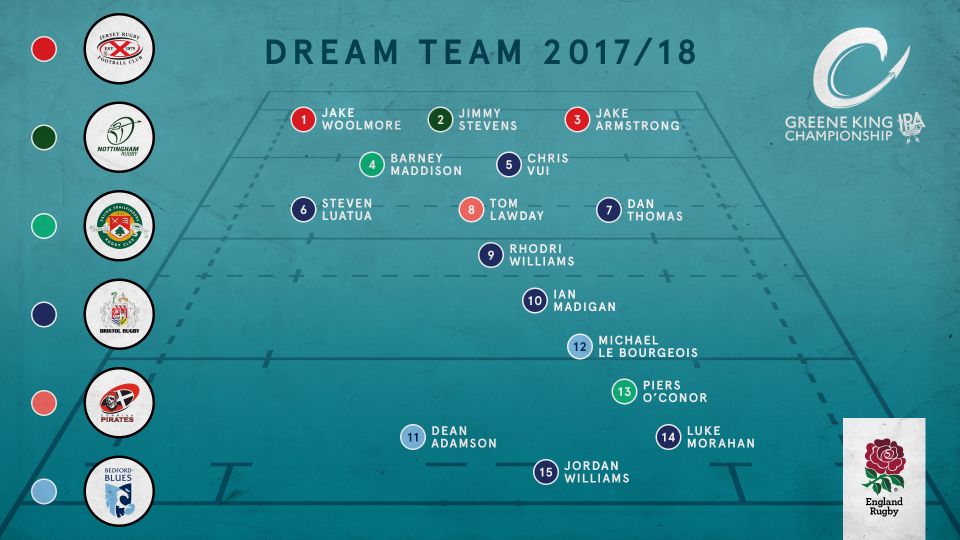