Floyd’s Story – ‘A Week One Summer’

‘A Week One Summer’

‘A Week One Summer’ is an autobiography written by former Saracens’ captain Floyd Steadman. Now a retired headmaster, he also, as rugby followers of a certain vintage locally will be aware, made several appearances for the Pirates – in fact 19 in all. 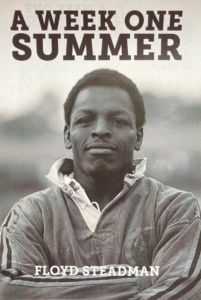 In November 2016, Floyd lost his wonderful wife Denise to cancer. A sister to my wife Sally, he had also lost his best friend and mother to their three boys.

Denise, who had grown up in Madron and was a member of the Friggens family, had often discussed plans with Floyd for growing old together, and understanding the challenges that he had faced she always wanted him to write an autobiography, which he has. Indeed, it was Denise who suggested his book be called ‘A Week One Summer’, which is fittingly dedicated to her memory.

The Foreword in the book is a contribution made by Mark Evans, a one-time teammate and still friend of Floyd’s. A former CEO of Saracens, Harlequins, Melbourne Storm and Global Rapid Rugby, Mark mentions that he has been lucky to have met and worked with a huge number of talented, highly motivated people with great values, and amongst them all Floyd stands out.

Another high-profile rugby personality, among many to speak so highly of Floyd, is Saracens, England, and British Lions forward Maro Itoje. In the book’s Prologue, Maro mentions it was Floyd who encouraged him to take up rugby. He also says:

“We have remained in contact over the years and, as I have learned more about his experiences and achievements, I have become even more inspired and impressed.

“Mr Steadman is a fantastic role model for young people, especially those who face adversity, and I am delighted his extraordinary story is now in print.”

The official launch of the book takes place this week at the East India Club in London, and it can be purchased – cost £11.99 online – via:

Rejected by his father, he coped with a childhood in care. Told he should train to ‘work with his hands’, he insisted on taking A levels so he could become a teacher. As one of the few black players in English club rugby, he was named Saracens captain at the age of 23 and played a leading role in the club’s progress during the 1980s.

After retiring from rugby, he emerged as an inspiring teacher and headmaster, having a positive impact on many, many young lives.

Over and over again, Floyd has prevailed against immense odds, prevailing not with anger, argument or hysterics, but with persistence, dignity and integrity.

Photographs displayed are as follows: 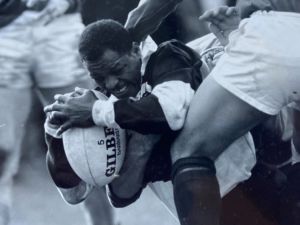 Floyd also captained Middlesex and played for the Barbarians for whom he is pictured about to score a try. 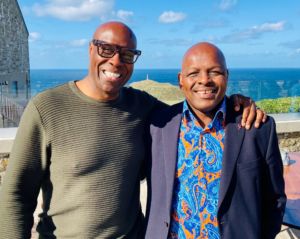 Sky Television have also recorded a soon to be seen documentary about Floyd’s life. Here he is pictured (Photo credit: Phil Westren) with Sky Sports presenter Mike Wedderburn (left) who during compilation visited Cornwall. Mike played in the same Middlesex side as Floyd. 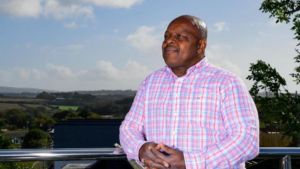 Floyd has recently moved to live at Ludgvan near Penzance, where he is pictured (Photo credit: Pinnacle Photo Agency UK). Although now retired as a headmaster, the 63-year-old still keeps very busy, including working for the Drive Forward Foundation, a charity that provides education and opportunities for children and young adults who have grown up in care. With his background in rugby and education he has also delivered talks in schools and certain groups both in London and Cornwall, and only last week treated members of the Cornwall RFU with a fascinating talk on the barriers he had to overcome as a black man making his way both in rugby and in education.