Confirming the names of eight players who will not be with the Cornish Pirates next season, sincere appreciation is expressed to each, as are best wishes for their futures.

As previously announced, the former Canadian international and the team’s popular captain these past two seasons has decided to retire. Due to celebrate his 30th birthday this coming August, ‘Beuks’ joined the Cornish Pirates post the 2015 Rugby World Cup, having previously played in the RFU Championship for Plymouth Albion. Making 107 appearances for the Pirates, and immensely respected throughout, the presentation of various club awards provided recognition for his quite considerable input and the level of respect in which he was held. A big thank you goes to Chris Nicholls Motors for sponsoring Brett.

A product of the St. Ives youth section, prior to signing for the Cornish Pirates at the start of the 2018/19 campaign, lock Jake had gained valuable experience playing for Redruth. Indeed, he continued to do so to the end of the 2019/20 season by which time he had also made 11 appearances overall for the Cornish Pirates, including six in the Championship. Jake has also represented England Counties under 18s and played for Exeter Chiefs under 18s and Exeter Braves. A big thank you goes out to DA Giles who have been sponsoring Jake.

Born in Consett, in the north-west county of Durham, scrum half Ruaridh signed for the Cornish Pirates from Newcastle Falcons in 2019. A former Scotland under 20s player, the 2019/20 season with the Cornish Pirates was one unfortunately hampered with injuries. In total he made just five appearances, besides also enjoying game time at Redruth. A big thank you to The Dock Inn who came on board this season to sponsor Ruaridh.

After impressing during pre-season with the Cornish Pirates in 2019, hooker Suva signed an Apprentice contract with the club. Previously capped by England at under 16 and under 17 levels, prior to his arrival in Cornwall he had played senior rugby in the centre for Peterborough Lions. He made one appearance for the Cornish Pirates during 2019/20, whilst also gaining important game and development time at Redruth. We would like to thank Merry Maids for sponsoring Suva this season.

Exeter-born Will was last August confirmed as the first player to be dual registered with Exeter Chiefs on a loan arrangement for the 2019/20 season. Previous clubs for prop forward Will included Plymouth Albion, where he has signed for next season. He made four appearances for the Cornish Pirates. A big thank you to The Cornish Maid Cafe who have sponsored Will this season.

Lock forward Cian signed for the Cornish Pirates in May 2019. He had previously played for Yorkshire Carnegie and was a former Ireland under 20s player. A medical issue meant Cian missed much of the season, restricting him to making just two appearances for the club. He also played briefly for Redruth and at the end of the season went on loan to Doncaster Knights. A big thank you to RDR Estates who sponsored Cian this season.

Irishman Paddy signed an initial short-term contract for the Cornish Pirates back in December, having previously been at Northampton Saints. His contract was then extended to the end of the past season. In total the backrower made five appearances for the club, besides enjoying game time playing on loan for Redruth. A big thank you to EcoHaus Design & Build who have been Paddys sponsor this season.

Will buzzed in to join the Cornish Pirates ranks in September 2019 on dual registration from Wasps. As another gifted young backrower, the Roehampton-born England Sevens man proved a great addition to the squad, in total making 11 x impressive appearances for the club. A big thank you to The Logan Rock Inn for sponsoring Will this season.

Thanking all the above players for their contribution, CEO Rebecca Thomas said:

It is rightly important that we acknowledge these players for their considerable input, whether during training, playing, or as ambassadors of the club generally.

Although we have expressed previous special appreciation to Brett, we also sincerely thank the other players mentioned, who have all been excellent throughout their period with us. Each has contributed and have hopefully enjoyed and benefitted from their association with the Cornish Pirates.

We wish them all the very best for the future. 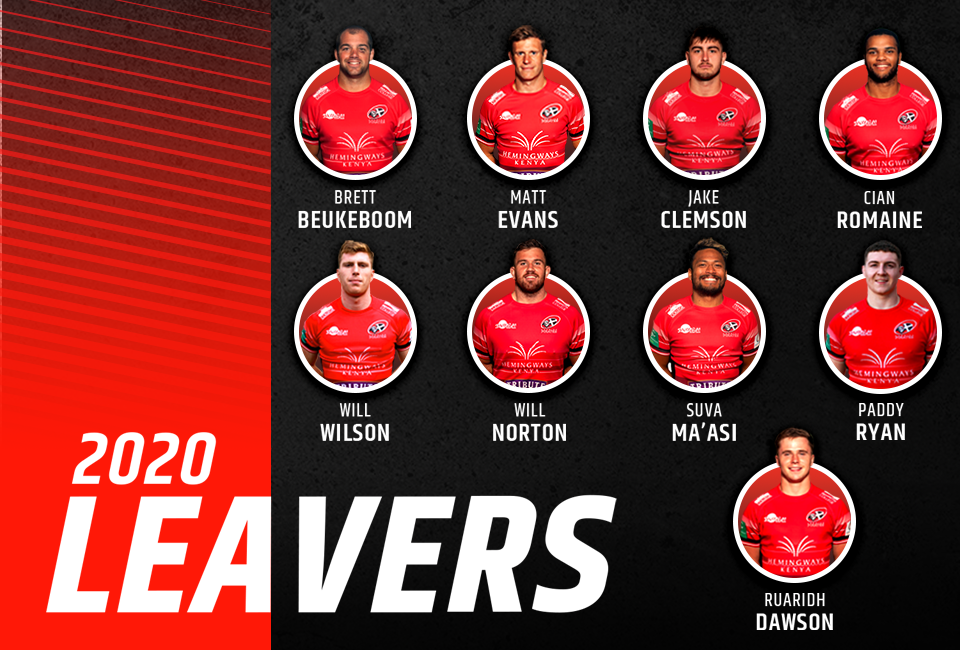