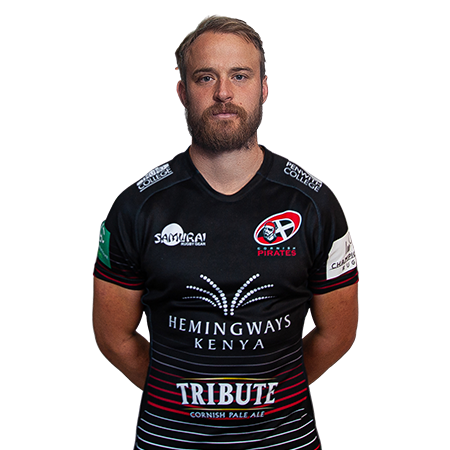 Ten years after he first joined the Cornish Pirates in 2011, it was announced in June 2021 that scrum half Tom was making a welcome to the club. Joining from Bristol Bears, he signed a one-year contract.

Cornishman Tom made 112 appearances and scored 33 tries for the Pirates before his departure in 2015 to join Northampton Saints.

Born in Truro and raised in Hayle, he started his rugby career with the Pirates back in 1995, playing for the club’s youngest mini-rugby side.
However, due to family work commitments, Tom moved to Somerset in the late 1990s and joined Wells RFC, playing for their minis section. He then joined Bath and played for them at all ages up to youth and the Academy.

Tom’s senior career started when he turned 18 and joined Bridgwater & Albion, playing in National League 3 South for the final three months of the season. In 2008, after joining Newbury who played in the old National League 1, he scored his first try for the ‘Blues’ in a game against Coventry, before a year later the chance then arose to move to Plymouth Albion to play in the newly formed Championship.

Selection for the England Counties team saw Tom tour Canada in 2010, when he started in two of the three games. Also, as a bonus, he was delighted to score a try in each match. Pulling on an England jersey was a massive honour, and it also importantly provided a good learning curve.

In his first spell with the Pirates, Tom enjoyed playing in front of the very knowledgeable and passionate Mennaye Field crowd, plus he had the honour of skippering the side on a couple of occasions. He also played for a selected Championship XV against Canada in November 2014 and at the end of that season was selected in the Greene King IPA Championship ‘Dream Team’.

During his time at Northampton Saints, Tom made 22 appearances, besides being a regular performer for the Northampton Wanderers side that enjoyed Aviva ‘A’ League trophy success. In 2018 he joined Coventry where he made 41 appearances before, nearing the end of the 2019/20 Premiership campaign, he firstly signed a short-term deal with Bristol Bears to conclude that season, and then a one-year contract with them for 2020/21. He also had a short loan spell at Bristol from the Pirates nearing the end of the 2014/15 season.