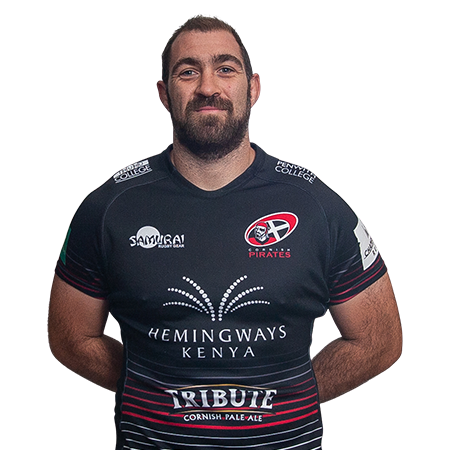 Introduced to rugby at Richard Lander School, aged 13, Tom skippered the school’s team that reached the National Schools Rugby Sevens finals in 1996, and he also started playing at Redruth, an inside centre then for the under 14s.

When stepping up to play Colts rugby, Tom became a backrower who would start his senior rugby playing career with the ‘Reds’ in 2009/10. He made 37 appearances in his first two seasons, and after Mark Bright departed to London Scottish really came into his own, blossoming into a similarly talismanic figure, and becoming a prolific try-scorer.

After officially joining the Pirates in December 2012, repeated injuries continually frustrated and hampered Tom’s quite clear potential to shine at Championship level, so it was of considerable credit that he battled through serious setbacks and steadily built his fitness to ultimately truly impress. Indeed, taking his overall games tally by the end of 2020/21 to 134, and on several occasions skippering the side, he has also been a prolific try-scorer – notching up an impressive 49 in just the past five seasons alone.

Callum Patterson - loads of money and royalty in Ireland

I have a fully qualified therapy dog at home