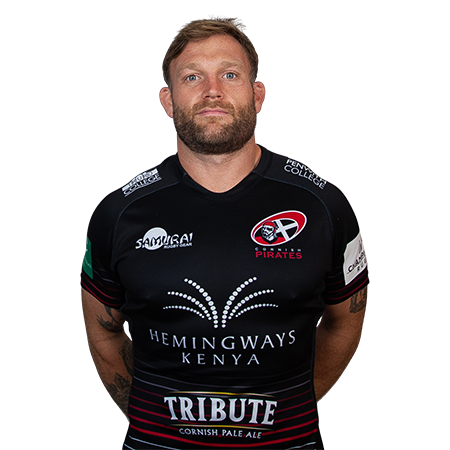 Educated at Torquay Grammar School, Tom played his early rugby for Newton Abbot. Indeed, he represented the Devon club from under 8s to seniors, but for a break when he turned out for Torquay Colts and Torquay, before returning to Newton Abbot.

In his ‘junior’ rugby days Tom played at scrum half, however from the age of 17 moved into the pack as a versatile and powerful front-rower.

Joining Bristol’s Academy in 2011, Tom’s debut for ‘Bris’ was a British & Irish Cup encounter away to the Cornish Pirates in September 2011. In total he made 15 appearances for Bristol Rugby prior to signing for the Pirates in 2013.

Tom’s twin brother Sam also plays rugby and has represented Cambridge University in the under 21s ‘Varsity’ match, whilst dad Rod is a former Torquay and Ivybridge player.

Hobbies for Tom include playing the drums, but it’s naturally rugby that is his main focus. After being injured in 2017/18, during which he still proudly reached the 100 games milestone to take his tally to 106, Tom was cruelly injured again in 2018/19 and actually never featured at all. To his credit, however, he worked hard on his recovery from what was a second knee injury and he again did considerable work in the community, besides being the club’s Facebook match commentator and a leading programme contributor.

It was great to see Tom back in action for the 2019/20 campaign, during which he featured in 18 games, thus taking his overall total to 124. He was also commendably awarded the Community Player of the Year award for a third year running.

Maliq Holden - i wanna know what its like to be fast

I love playing the drums