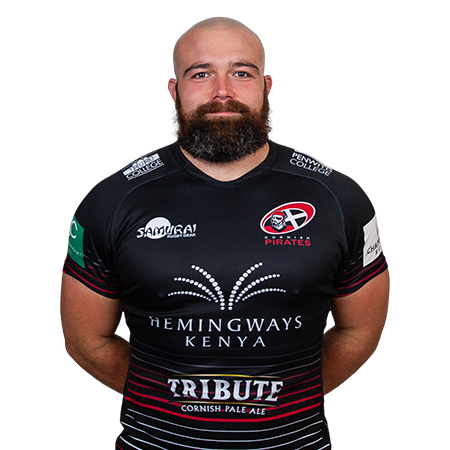 Sam is sponsored by

Cheshire-born and raised, Sam joined the Cornish Pirates on a two-year contract ahead of the 2019/20 season,

He was educated at Wilmslow High School and then Leeds Beckett University, where his foundation degree was in Business Studies. As for his club rugby that has been played for Wilmslow, Macclesfield, Ealing Trailfinders and Jersey Reds from where he signed for the Cornish Pirates.

Sam played in the semi-final of The Daily Mail Cup during his time at Wilmslow High School and he later, in 2015, was a member of the Leeds Beckett University side that won the BUCS (British Universities & Colleges Sport) final played at Twickenham.

Recording a 31-23 victory against Loughborough, fellow ‘Pirate’ Will Cargill skippered the team and of extra interest both Sam and Will also played together in the same England Students side.

As a youngster Sam enjoyed watching former England prop Andrew Sheridan play at Sale Sharks, whilst another sporting interest in his youth was cricket, playing at local club level for Macclesfield and Prestbury.

I gave flowers to the queen

Sam is sponsored by...