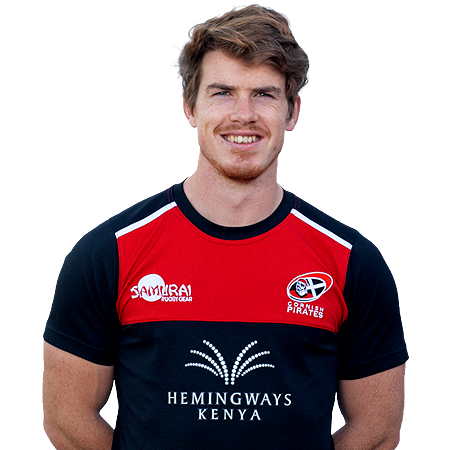 Rhodri is sponsored by

It was announced ahead of the 2019/20 season that Welshman Rhodri had joined the Cornish Pirates on a two-year contract.

Having played rugby from the age of five to 18 for his home village club of Crymych in northeast Pembrokeshire, Rhodri next spent three years playing for UWIC (University of Wales Institute, Cardiff) in the BUCS (British Universities & Colleges Sport) competition.

Following graduation, he represented Great Britain Students 7s in the Student Olympiad, which was, in his own words, “an unbelievable experience”, and sandwiched in between two spells playing for Llandovery in the Welsh Premiership he enjoyed two years involvement with Wales 7s.

A move to Rotherham for the 2017/18 Championship season proved a tough year, as the Titans were relegated, However, he certainly left his mark at the Mennaye Field, when in 62-47 loss against the Pirates he scored an impressive hat-trick.

Following his time ‘Up North’ Rhodri managed a move back to Wales to spend a year with the Dragons, and it was from there that he joined the Cornish Pirates for whom he made 15 appearances during the 2019/20 season.

I have an interest in doing/being an Iron Man

Rhodri is sponsored by...