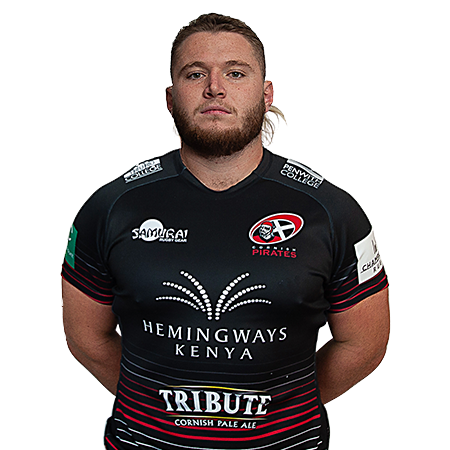 Patrick is sponsored by

The Cornish Pirates confirmed early in February 2021 that ahead of the belated 2020/21 Championship season Namibia-born Patrick was arriving on loan from Exeter Chiefs.

After Patrick first played rugby in his hometown, Walvis Bay, Namibia at the age of seven, he later matriculated at Walvis Bay Private High School and joined Exeter Chiefs in November 2018. Since then, besides making in appearances in the ‘A’ League and in the Premiership Cup, he also had a spell on loan to Chinnor when on his National League One debut in February 2019 he was a try-scorer in their 48-35 win against Rotherham Titans. Former Pirates Kieran Goss, Craig Holland and Bertie Hopkin also featured in Chinnor’s starting line-up.

Throughout Patrick’s rugby career to date, his parents Adrian and Waldi have provided appreciated continuous support. His dad, who represented South Africa at junior level, has been an especially big influence, inspiring Patrick to follow in his footsteps.

As for hobbies, away from rugby Patrick enjoys playing golf.

Patrick is sponsored by...