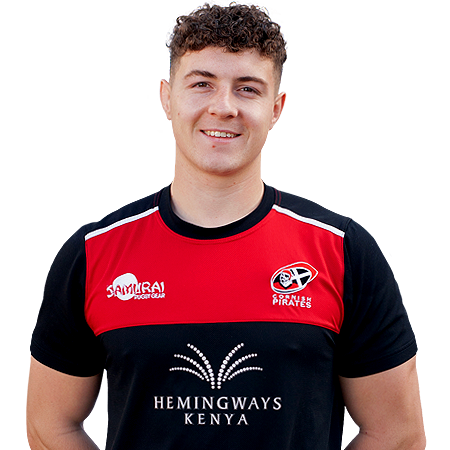 Paddy is sponsored by

Paddy signed an initial short-term contract for the Cornish Pirates in December 2019, having previously been at Northampton Saints.

Kildare-born, he first played rugby from the age of six to 12 for Cill Dara RFC and then for Newbridge College where he was educated. Honours achieved saw him represent Leinster at under 17,18 and under 19 levels, before the exciting back-row prospect then made the trip over the Irish Sea to join the Northampton Saints Academy.

During his time at Northampton, Paddy scored a try to help seal a win for their Wanderers side against Exeter Braves in the 2017/18 Premiership Rugby A League Final, whilst in 2018/19 he played for the Saints versus Wasps in the Premiership Cup.

An ACL knee injury provided a setback, however back to fitness the decision was made in December 2019 to sign for the Cornish Pirates. He had coached at Bedford Modern School during his time on the sidelines and has studied Business and Management with The Open University.

Having made five appearances for the Pirates – two in the Cup and three in the League – before the end of last season’s Coronavirus-curtailed campaign, besides also featuring for Redruth on loan, Paddy has since signed a new contract with the club to the end of May 2021.

I was on a TV show called - Irelands Fittest Family

Own a coffee shop

Paddy is sponsored by...