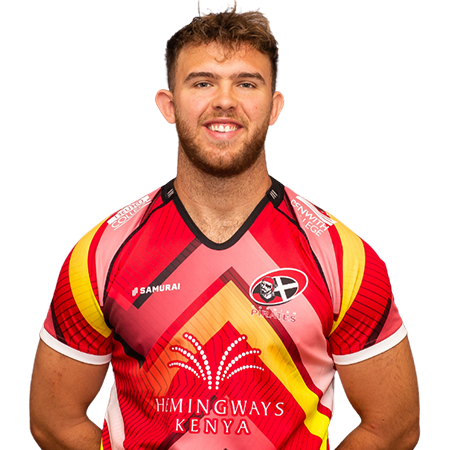 Olly is sponsored by

Olly is sponsored by...

It was announced in May 2022 that backrower Olly had signed a one-year contract with the Cornish Pirates.

Olly first played rugby for Caernarfon RFC when aged seven, and then for Bangor. He was educated at Ysgol Friars until the age of 16, and whilst there played for Rygbi Gogledd Cymru (RGC) in their under 15 and under 16 sides.

A next move was to prestigious Llandovery College for sixth form education, from where he played in the Welsh Colleges league and in friendlies versus strong English schools. He continued playing for RGC in the regional competitions and from there was selected for Wales under 18s.

Next attending Exeter University (to study Mathematics and Physics), Olly was a member of their successful BUCS Super Rugby league team in his first 2018/19 year and, before joining the Cornish Pirates at the end of the 2021/22 campaign, was captain of a successful side that won the title again, although he sadly missed the final because of injury. The team was promoted as Champions of the South-West Premier League, and during his time based in Exeter he also played sevens rugby for Exeter Chiefs.

In terms of influences, Sam Warburton and Alun Wyn Jones were Olly’s idols while growing up, whilst in his playing career he has appreciated the work of Cornish Pirates’ coach Louie Tonkin who coached him when at Exeter University

Outside of rugby, Olly really enjoys rock climbing (he used to compete to quite a high level in this), mountain biking, and paddle boarding/sea kayaking which, prior to his arrival in Cornwall, he was very much looking forward to.