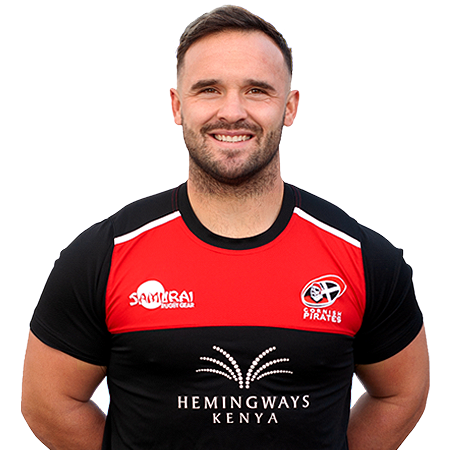 JB is sponsored by

Jean-Baptist, or ‘JB’ for short, whose mum is Welsh and his dad French, signed for the Cornish Pirates in May 2019, having joined from Yorkshire Carnegie.

After first playing rugby for Llandaff North when aged about 5-6, JB next played for St. Joseph’s in Cardiff and then Glamorgan Wanderers. As for his education, that was at Whitchurch High School and at Llanishen High School, where he excelled in athletics at – perhaps surprisingly for a scrum-half – both the javelin and shot put. He also enjoyed rugby action playing for Cardiff Blues and the Dragons at under 16 and under 18 level.

Attending Filton College in Bristol really aided his rugby development and in 2011 he had a year on an Academy contract with Saracens. He also played for Old Albanians and for Wales Sevens before moving to France to play for second division club Le Pays d’Aix where, during his time there, he spent time on trial at Toulon and was mentored by Jonny Wilkinson.

Returning to England from French side Le Parc in 2014, a move to Worcester saw him help the Warriors to gain promotion back to the Premiership in 2015, besides captaining the team to British & Irish Cup success.

In 2016, JB returned to France to play for Nevers, during which he had a loan spell at Clermont Auvergne, and it was from Nevers that he joined Yorkshire Carnegie ahead of the 2018-19 season.

Injuries unfortunately disrupted JB’s first season with the Cornish Pirates. However, in total he made nine appearances (all starts) and scored two tries.

Craig Mitchell - chilled but professional, would love to see what he gets up to in his free time

I speak fluent French - I can play hooker too

JB is sponsored by...