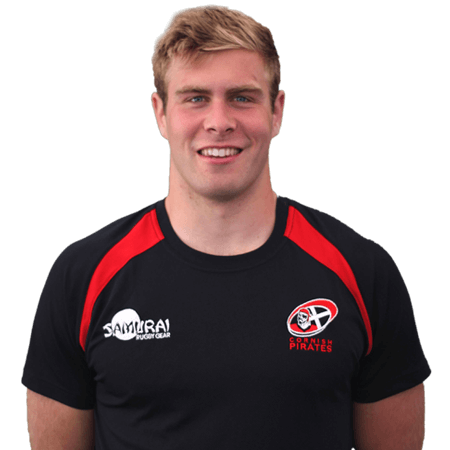 It was announced in August 2018 that James would be one of seven Exeter Chiefs players to be dual registered with the Cornish Pirates for the 2018/19 season. He shortly after made his debut in a pre-season fixture away to Aberavon Wizards.

This talented backrow forward, who graduated with a degree in Geography from Exeter University, had earlier in the year agreed a full-time Academy contract with the Aviva Premiership club.

Having started his career as a youngster at Colchester Rugby Club, James moved onto schooling at Eton and was part of the London Irish Academy between the ages of 15-18. At Exeter University he impressed the Sandy Park coaching staff with not only his displays for the University in the BUCS Super League, but also in the Aviva A League, Singha Premiership 7s and many training sessions.

After making 15 appearances for the Cornish Pirates in his first season at the ‘Mennaye’, when dual registered similarly in 2019/20 he featured and impressed once again. A further 18 games took his tally to 33, before in May 2020 came the welcome news that he was to become a fulltime ‘Pirate’, having signed a two-year contract with the club.

The final day of The Ashes series decider

Anything that involves a nippy back running at me