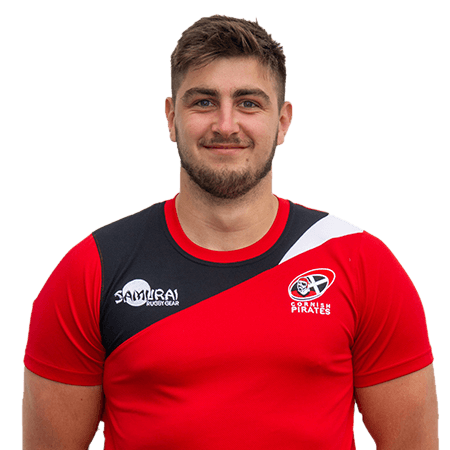 Jake is sponsored by

Born in the Royal Naval Hospital, Gibraltar, at a time when his father was based there in the Navy, Jake was later educated at St. Ives Secondary School and Penwith College.

Jake first played rugby at the age of six for St. Ives, where he continued to represent the club through the age groups and into the Colts, who he captained. Throughout the period he much appreciated the help of his coach Ian Roberts, as he has always the support given him by his parents Mark and Louise. Jake has also in the past represented Exeter Chiefs under 18s and Exeter Braves.

Prior to signing for the Cornish Pirates at the start of the 2018/19 campaign, Jake had the year before gained valuable experience playing for Redruth. Indeed, he continued to do so on loan spells to the ‘Reds’, whilst at the same time training with and making four appearances for the Pirates, including two in the Championship.

When Jake signed a new one-year contract ahead of the 2019/20 season, Cornish Pirates’ co-coach Alan Paver described the young lock as a man for the future and someone very much seen as a Cornish Pirate.

I was born in Gibralter

Jake is sponsored by...