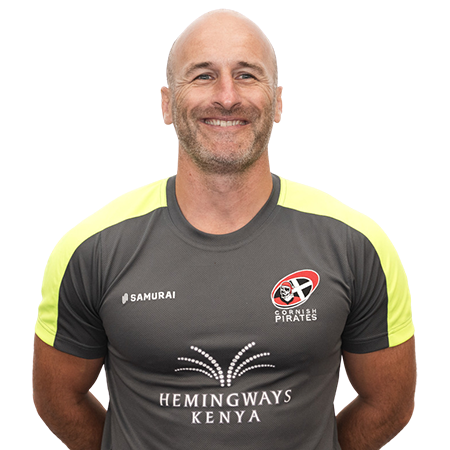 Gavin is sponsored by

Pirates’ supporters first cast their eye on Bridgend-born Gavin, who is nowadays a joint Head Coach at the Cornish Pirates, in October 2003. It was when a mightily impressive Orrell team won 48-12 at the Mennaye Field. Ross Reynolds was their Coach, Jim McKay his Assistant, with scrum-half Gavin notching one of their seven tries scored in the match.

At the end of the 2003-04 season, following a brief move to Rotherham we were delighted that Gavin joined us, where he enjoyed three successful seasons, The spell culminated in him captaining the team to victory at Twickenham in April 2007, when we be beat Exeter Chiefs 19-16 to lift the EDF Energy National Trophy. At the end of that season he was also, for a second year running, named in the Rugby Times National One Dream XV, having received more votes than any other individual in their respective positions. It was a just reward for an honest and inspirational figure who had a 100% work ethic.

As we all know, Gavin soon departed for Llanelli, where in two years he made 31 appearances for the Scarlets, including featuring in a Heineken Cup win against Stade Francais. His move had been a hard choice for him to make, so news of a welcome return to Cornwall in 2009 was very well received. Once again given the captain’s armband, the Pirates emerged as first ever winners of the British & Irish Cup in 2010, beating Munster 23-14 in the final. Also, under his leadership, the team impressed many by reaching the twin-legged finals of the RFU Championship in both 2011 and 2012.

Honours for Gavin have included being nominated as an Olympic torchbearer in 2012 and skippering the RFU Championship side that played the Maori All Blacks, besides also playing for the Barbarians in a Remembrance Day fixture played against the Combined Services in 2014. Alan Paver played in the same match.

A Player/Coach at the time, by the end of the 2014-15 season Gavin took his final games tally for the Pirates to 211.

Along with Alan, Gavin was appointed a Co-Coach at the Cornish Pirates in 2016. Neither are Cornish however the county has happily adopted them, greatly appreciating their wholehearted commitment.

Matt Jess keeps me in shape

Gavin is sponsored by...