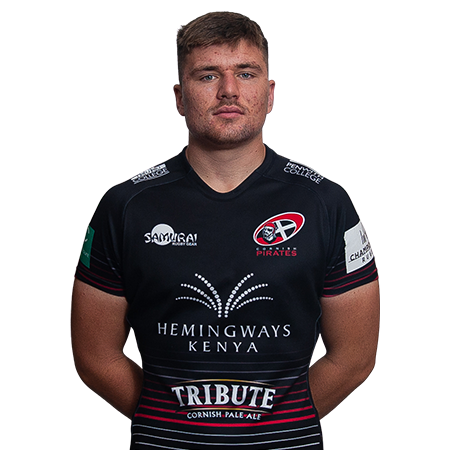 Ed is sponsored by

Joining from Welsh regional side Dragons Rugby, the Cornish Pirates confirmed in June 2021 that lock forward Ed had signed a one-year contract with the club.

A former Wales under 20s player, who competed in both the 2019 and 2020 Six Nations campaigns and the 2019 Junior World Cup in Argentina, Ed was born in Frome but raised in Westbury, Wiltshire. He qualified for Wales through his mother’s side of the family from Neath.

Ed’s early rugby was played for Trowbridge RFC and later, after playing football from the ages of 12-16, for Welsh Exiles, Dragons under 18s, Dorset & Wiltshire under 18s and 20s, and Cardiff Metropolitan University. He has also played for the Dragons ‘A’ side in the Celtic Cup.

Educated at Matravers School (Westbury) and then Clarendon Academy (Trowbridge) for years 12 and 13, prior to his arrival in Cornwall Ed had just completed an undergraduate Degree in Sports Management from Cardiff Metropolitan University.

Throughout his rugby career thus far, Ed has greatly appreciated the motivational support provided by his parents, whilst his other interests have been football – when younger he played at county level and represented Bath and Wiltshire Schools – and surfing, plus he has enjoyed playing a little golf, albeit, by his own admission, not to a good standard!

Ed is sponsored by...