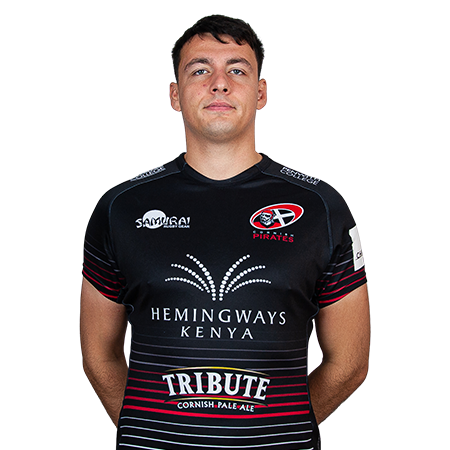 Danny is sponsored by

It was confirmed in May 2018 that young lock Danny was joining the Cornish Pirates.

Educated at Beaumont School, St. Albans, Danny represented Hertfordshire through the age groups and played for England U17s. He became a Saracens Academy member, whilst he has also played for ‘Sarries’ both in the Anglo-Welsh Cup and the ‘A’ league.

During the 2017/18 season Danny, who is a keen student of line-out play, and is also a Arsenal supporter, spent time on loan at his boyhood club Old Albanians.

When Danny signed for the Cornish Pirates, co-coach Alan Paver said the cub was really excited to be signing yet another young prospect who clearly had very good tutelage during his time at Saracens.

As for his first season in Cornwall, in making a total of 22 appearances
Danny displayed an excellent attitude, did well in the contact area and proved quite a handful in the line-out. He was also a good personality around the team.

Further progress was then evident in the following two seasons, during which a further 32 appearances were made, to thus take his overall tally to 54.

At the end of the 2020/21 campaign, Danny was also a proud recipient of both the ‘Most Improved Player’ award and the ‘President’s Cup’ for his contribution made on the field during the season.

I am an Arsenal fan

I would work for Spotify

Danny is sponsored by...