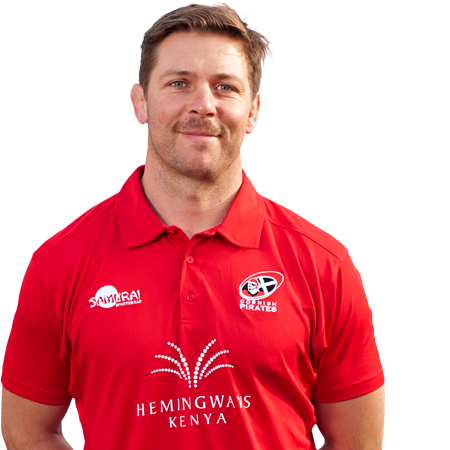 Chris is sponsored by

Bristol-born Chris, who is an Assistant Coach and former captain of the Cornish Pirates, first played rugby for Burnham-on-Sea at the age of eight. He later went to Millfield School and then Cardiff University, before signing for Bristol ‘Shoguns’ where he made his Premiership debut against Wasps in 2001/02.

A former England U18s (Clubs) player, back-rower Chris impressed when he was briefly on loan to the Pirates in 2005-06, as he did again for two years after when playing against us for Newbury Blues.

With his signature then captured by the Cornish Pirates in 2008, Chris was really excited about joining the club and he has been a great contributor ever since, both on and off the field. A number of club awards received over the years have included such as the ‘John Stirling Cup for Commitment’, the ‘Player of the Year’, and the ‘Players’ Player of the Year’, whilst the British & Irish Cup winner with the team in 2010 also had the honour of playing for the Barbarians against Heriot’s in 2014.

Throughout his time with the Cornish Pirates, playing mostly in the backrow and in later years occasionally at lock, Chris was an inspirational performer who, by the end of the 2017/18 season, had taken his final games tally for the club to 227.

Appointed a Player/Coach for the start of the 2018/19 campaign, Chris made no further playing appearances but contributed fully in his coaching role, the period having proved a natural transition period for the respected and experienced performer.

Fitness test closely followed by any kind of contact

I was in a band at school and played bass guitar (badly). But we weren't as good as The Black Jackets!

I would have probably joined the forces but I am too old for that now!

Chris is sponsored by...