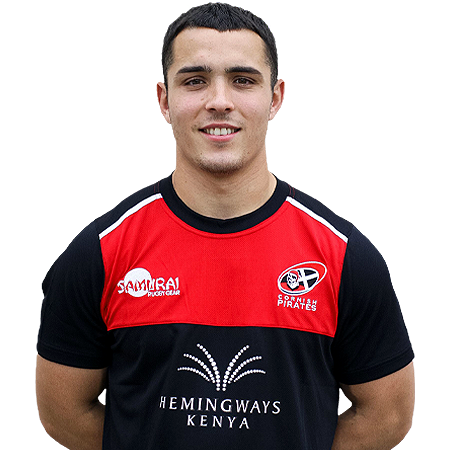 Callum is sponsored by

The Cornish Pirates confirmed in June 2021 that wing Callum had signed a one-year contract with the club.

Starting rugby at minis level with Teddington, Harrow School-educated Callum, who is a quarter Indian, moved to Richmond, was in the Wasps Academy, and played for England at under 16s level. In June 2016 he joined England 7s from school and in April 2017 he made his HSBC World Sevens Series debut at the Hong Kong Sevens.

Re-joining Wasps in July 2018 as a Senior Academy player, Callum was an outstanding performer in both the 2018 and 2019 Wasps Premiership Sevens sides that reached the competition finals, scoring eight and nine tries respectively. He also featured heavily in the 2018/19 Premiership Shield competition, scoring 11 tries in 10 appearances and earning promotion to the Wasps’ senior squad for the 2019/20 season.

In September 2019, a week after making his First Team debut in the Wasps’ Premiership Cup encounter against Saracens, in which he also scored, Callum was loaned out to Ampthill to aid his overall development. Cruelly, in his very first game for the Championship side he picked up a serious knee injury away to Ealing Trailfinders. However, after a lengthy spell out, on returning to full fitness he in the latter part of the 2020/21 season marked his Wasps comeback with a hat trick in an ‘A’ Team friendly against London Irish.

Callum has also served short loan periods with Richmond, Nottingham and, in 2020/21, Coventry.

Callum’s father Amit, who played for London Welsh in the 1980s, has always provided encouragement, whilst former Ireland and British Lions player Brian O’Driscoll is an idol.

A book, I am an avid reader!

Very close to home but the Men’s Wimbledon final. I really love watching tennis and think as athletes they are incredible.

Any time Jimbob is stood on the try line in pre season, you know its going to be a tough one!

Josh Caulfield because he always seems to be surrounded by dogs and I am a sucker for a cute dog.

I am a quarter Indian

I’d be a Barrister, which is something I am pursuing outside of rugby by attending law school part time.

Callum is sponsored by...