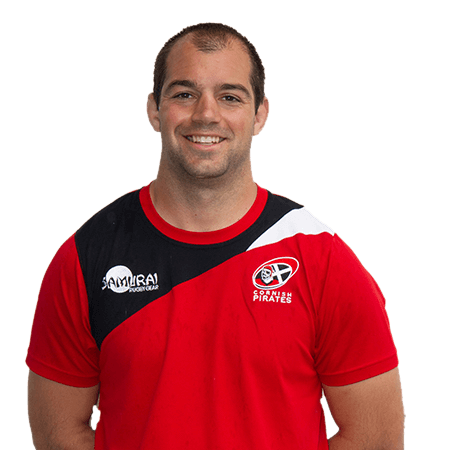 Brett is sponsored by

The Cornish Pirates captured the signature of Canadian international Brett at the end of April 2015, on a contract that saw him cross the River Tamar from relegated Plymouth Albion.

Starting his rugby at the age of 12 for the Lindsay Rugby Football Club, he was educated at Lindsay Collegiate & Vocational Institute and at Shawnigan Lake School (the same school as fellow ‘Canuck’ Matt Evans attended). He also played at the University of Victoria for four years, as well as representing Ontario Blues.

Family support has always been forthcoming and there have certainly been influences, as Brett comes from a very athletic background. His dad was an ice hockey player and an uncle, Jeff Beukeboom, had an extremely successful National Hockey League (NHL) career. More recently, Brett has not only captained Canada but also proudly played alongside his younger brother Matt, who debuted for Canada in the 2017 Americas Rugby Championship.

Brett, who made his debut for the Pirates immediately post the 2015 Rugby World Cup, had by the end of the 2018/19 campaign, during which he was club captain, taken his overall games tally to 86 appearances. At the season’s end he was also presented with both the John Stirling Memorial Cup for Commitment and the President’s Cup for being adjudged the most outstanding contributor on the field during the season.

Stanley Cup Final or The Superbowl

John Stevens - his mum is a great cook

I have a masters in Business Management

Assistant to the regional manager at Dunder Mifflin Paper Company

Brett is sponsored by...