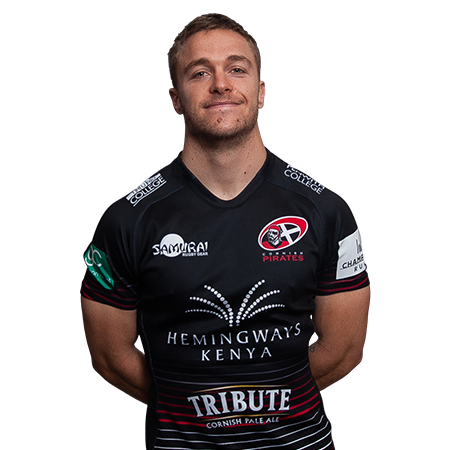 Alex is sponsored by

Alex, who signed for the Cornish Pirates as a Player Development Foundation (PDF) member in 2015, played mainly football as a youngster. Indeed, it was only at the age of 16, whilst at Lord Wandsworth College in Hampshire, that he found a serious passion for rugby.

After a first taste of club rugby with Camberley RFC, Alex studied and played at Hartpury, representing the college in both the National Leagues and the BUCS League.

With Alex’s dad hailing from an Irish family, and his mum being English, at the age of 19 Alex gained his first international cap representing Ireland under 20s. This was after playing for the Irish Exiles and a summer spent training and playing for Connacht in Galway. Further international honours followed, but this time it was with England Students at the back end of the 2014/2015 season.

With bullet-like pace an attribute, Alex has also impressed as a gifted Sevens performer in the past, including playing for Bath Rugby in the Singha Sevens.

As for the Cornish Pirates, in his first six seasons he made 99 appearances for the club and in the process scored an impressive total of 52 tries.

Alex is sponsored by...