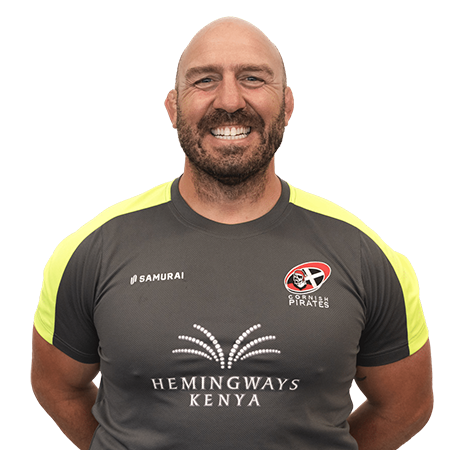 Alan is sponsored by

Rotherham-born Alan, nowadays a joint Head Coach at the Cornish Pirates, headed west to Penzance & Newlyn RFC from Plymouth Albion in June 2002. A great student of front-row play, he had joined the Devon side in 1999, having previously played for Vale of Lune.

During his time with us ‘Paves’ has gained enormous respect, and deservedly so, not just from his fellow players and supporters but also from opposition clubs.

Reflecting on our win against Exeter Chiefs in the EDF Energy National Trophy final at Twickenham in 2007, there are shrewd observers who felt that our scrummaging provided the platform for victory, with prop Alan at the very forefront of our effort.

He made one appearance in the Premiership for Exeter Chiefs in 2011/12, whilst during his 2012/13 testimonial year he was immensely proud to have been selected to play for the RFU Championship XV against the Maori All Blacks.

2014 was another memorable year for Alan. Appointed as Forwards Coach to the England Counties XV that played two matches in Georgia, he was also appointed Player/Coach at the Cornish Pirates. Another worthy honour, as bestowed similarly to Gavin Cattle, was selection to play for the Barbarians in a Remembrance Day fixture played at Bath against the Combined Services. Injury had cruelly prevented him from featuring for the ‘Baa-Baas’ the season before, so to be selected again, and then to play, was clearly special.

Along with Gavin Cattle, Alan was appointed a Co-Coach at the Cornish Pirates in 2016, while he still played the occasional game, Neither Alan or Gavin are Cornish, however the county has happily adopted them, greatly appreciating their wholehearted commitment.

It must also be mentioned that during his years as a player for the Cornish Pirates, by the end of the 2017/18 season Alan had taken his total number of appearances for the club to 360, which is a remarkable achievement for one club in the professional era.

I used to be a grave digger

Alan is sponsored by...