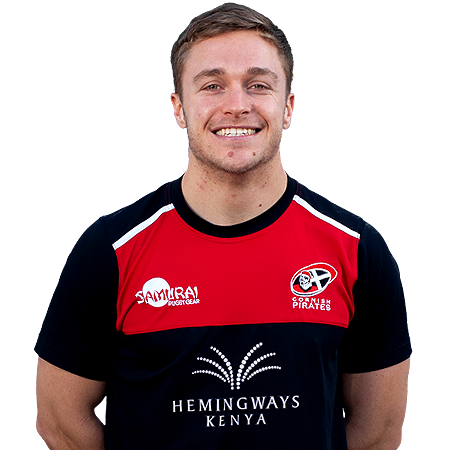 On the road for a third week running in the Championship Cup, playing under Friday night floodlights at Nottingham’s ‘The Bay’ ground in West Bridgford, the Pirates emerged comfortable winners. Speedy winger Alex O’Meara also notched up an impressive four tries in the match.

Both sides ringed changes for this Round 3 encounter, including for the Pirates a step back from second row to blind-side flanker for Fa’atiga Lemalu. On the bench back-rower James McRae, who is dual-registered with Exeter Chiefs, was looking forward to some action and add to the 15 appearance he made for the Pirates last season.

Expecting a tough challenge against the ‘Green & Whites’, on what was a cool and calm evening in Nottingham the Cornish Pirates kicked the game off through the boot of fly-half Javier Rojas Alvarez, who also shortly after was on target with two successfully struck penalty attempts.

Nottingham’s skipper, scrum-half Murray McConnell, looked lively and keen to get a response from his side, however when the Pirates attacked with purpose on the quarter hour mark it was O’Meara who gathered a pass and sprinted some 20 metres to score. The conversion attempt by Rojas Alvarez narrowly missed, but soon called upon to attempt another penalty opportunity he stepped forward to further extend the Pirates lead.

In their pack, Cornish Pirates’ hooker Tom Cowan-Dickie, who eagerly returned to match action off the bench the previous week, was in determined mode. He was involved in a good handling move that led to No. 8 Will Wilson scoring try number two, and just before the break there was a second in the match for O’Meara. Rojas Alvarez converted both efforts to give the Pirates a fully deserved 28-0 half-time lead.

Pre-match it was expected that this contest would be one between two evenly matched sides. Thus far, it had proved not to be the case, so how would the Green & Whites react? The answer, initially, would be positively, as an overlap was created that enabled wing Harry Graham to run and cut back inside for a try converted by fly-half Tom Stephenson.

Making an all but immediate response, the Pirates secured their bonus point when a burst of speed from O’Meara saw him leave would be defenders trailing in his wake. In the process he also secured his converted hat-trick score.

Among replacements making an impact for the Pirates was Maliq Holden, but it was O’Meara who was the shining star under the Friday night floodlights, his fourth try of the night – also taking his try tally to six in the two Cup games – seeing the Pirates to 40 points, with a couple extra then added thanks to the boot of replacement fly-half Will Cargill.

For the Pirates and their followers this was a victory to provide no shortage of encouragement. The team, having won two of their three opening games, will now take a break from Championship Cup action until December, when they will then have the advantage of playing their three remaining Pool 3 games all at home. The evening’s result will also whet the appetite ahead of next Sunday’s eagerly awaited opening Greene King IPA Championship league match of the season, at home against Ealing Trailfinders.

Having made some pleasing progress over the Cup programme, the result tonight was a just reward for the work the players have put in. We are a long way from the finished product but that’s extremely exciting.

Our future plan is to win the Championship, whilst the current plan is to be a consistent performing team at the top end.

Looking ahead to the start of the league games, Chris added:

What better way to gauge where we are at than playing the two elite teams (Ealing Trailfinders and Newcastle Falcons) in the first three weeks of the competition. Post these matches we will have a very clear picture of where we are and where we need to be.