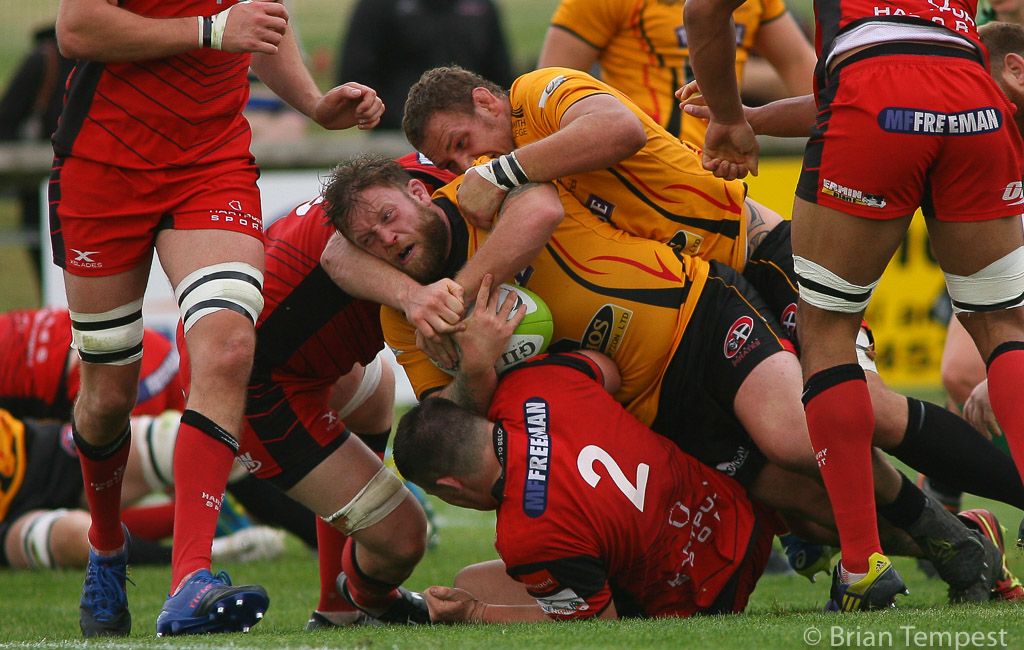 Cup Campaign Gets Off To A Bright Start.

Played at Hartpury RFC’s Gillman’s Ground, this opening British & Irish Cup match of the season, which also formed a first ever meeting between the two sides, saw the Cornish Pirates get their trophy campaign off to a pleasingly bright start.

Promoted from National One at the end of last season, the Hartpury team has made impressive progress through the English rugby pyramid since entry at the bottom level in 2004. They have also been quick to find their feet competing in the Greene King IPA Championship, whilst this encounter was their debut appearance in the British & Irish Cup.

For their maiden trip to Hartpury, centre Nicolas De Battista returned to the Pirates starting line-up and skippered the side, whilst another ‘Nico’, in the shape of wing Nicolas Coronel was making his first competitive match debut for the club. Other changes in the starting line-up from the one that faced Nottingham the previous weekend included starting roles for fly-half Will Cargill, prop Billy Keast and hooker Tom Channon. On the bench AJ Cant, who featured in the pre-season friendly against Exeter Chiefs, was keen for action, as was Angus Taylor for what would be his debut.

Just ahead of kick-off a minute’s silence was fittingly observed in memory former Pirates, Cornwall, England and British Lions prop forward Brian ‘Stack’ Stevens, who sadly passed away earlier in the week.

Seeking a good start to the match, the Pirates prayers were answered with the game’s opening try, scored in just the fifth minute. Playing on the wing, where he ended the contest against Nottingham and was also the final try-scorer, it was Kiwi Dan Koster who crossed out wide for his second five-pointer in Pirates colours. In dry but breezy conditions Cargill was luckless with the difficult conversion attempt

The home side, led at the Gloucestershire team’s Hartpury College base by former Bristol rugby skipper, Iain Grieve, and with Cornishman Alex Ducker playing on the wing, would not take long to level matters, a good passage of play ending with full-back Ed Coulson scoring an unconverted try.

Reliable at scrum time has been a positive mark in the Pirates play, and with a penalty awarded by referee Joy Neville, a former captain of the Ireland women’s team, Cargill stepped forward to slot a well-struck kick from about 35 metres out.

So far, so good, but it would soon get even better when Moyle, who is the Cornish side’s top try man this season, took his tally to seven with a run, chip and follow up to score. Cargill added the extras and then landed his second penalty of the match to put the Pirates firmly in control.

Despite losing the services of injured flanker Matt Bolwell, who had to be replaced by Tom Cowan-Dickie, the Pirates arrived at half-time still 18-5 up following what was an encouraging opening 40 minutes.

Continued dominance at the start of the second half saw the Pirates extend their lead when No. 8 Tom Lawday powered over for a try converted by Cargill.

With a bonus-point-providing fourth try surely now in sight, and with Cowan-Dickie enjoying space to roam and have impact, the seemingly inevitable was indeed delivered when it was Lawday holding court who made it over the line again for another converted score.

The 5-32 scoreline made pleasing reading for the healthy number of travelling Pirates supporters, although when the team seemingly took their foot off the pedal it was opposition fly-half Jamie Williams who pulled seven points back with a try and a conversion.

Discipline again let the Pirates down this season, as replacement prop Christian Judge was yellow carded for making an adjudged high tackle, and it led to a third try for the hosts, this time scored by No. 8 Darrell Dyer and converted by Williams.

A few ‘Pirate’ jitters about were understandable, but they were settled before the end after Grieve was yellow-carded and Cargill’s third successful penalty strike saw the Pirates emerge 35-19 victors.

Aware that defeats suffered this season have been by very narrow margins, this result was just what the Pirates wanted, despite yet again having lost a player to the sin bin.

We said ahead of this match that it was important to get out there and really go for it, in an effort to build momentum, and we did just that.It was great to get off on the right foot and it was satisfying that we had a really good hold on the game throughout the 80 minutes, with our scrum again solid, our line-out improved and there energy all about the field.Forward-wise we only had front-rowers on the bench, so credit that two of them came on, played in the back-row and got stuck in, whilst it was great that Angus and AJ also had their first experiences playing competitive rugby in the Cup.