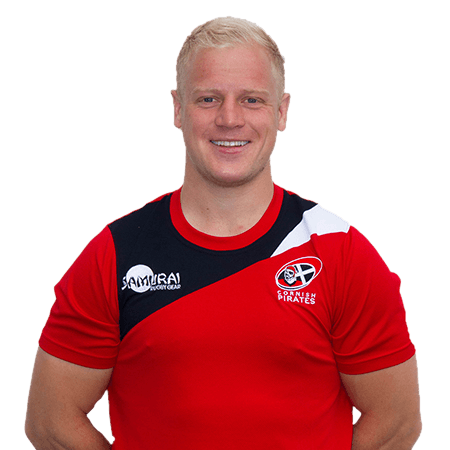 The Pirates’ mission – should they wish to take it – was to take their guaranteed qualification into the Championship Cup ‘quarters’ and turn it into a home tie.

In the way was a certain London Scottish – to whom the Cornish side had already lost to twice – inevitably at the RAG. One of those things in rugby that seems to be as predictable as ‘Arsenal 1…’ used to be in the other ball game.

But this is cup rugby and with this being a tie that actually had something resting on it for both sides – anything could happen. More so some wits were suggesting – given that the old Nemesis – Mark Bright was up at The Rec watching his former side (the Reds) against Bournemouth.

Twelve minutes in – and ‘anything’ was happening. The hosts found themselves fourteen points down and were struggling big time, to contain an Exile side intent on bouncing back from a heavy loss against Nottingham a week earlier. Tries from Magie – who converted both – and Stevenson, who ghosted in un-opposed behind the Newlyn posts – had the home alarm bells ringing.

It was full blown air siren stuff when Magie stepped up to potentially add three, only three clicks later. But the US international fly half’s penalty faded right of the posts – a let off for the Pirates for sure – but it still looked grim for the home faithful.

However. Fortunes began slowly to swing back towards the red shirted hosts. It wasn’t pretty at first, as the victory of nailing a lineout and some territory of their own, at least signalled the stemming of the flow.

No 8, McRae’s emergence from a 12 man pile of bodies at the Penzance End put the hosts back in play. Alvarez nailed the extras and suddenly the mood noticeably changed.

A similar outcome four minutes later in the Clubhouse Corner levelled things. The recipient of the spoils this time was hooker, Cowan-Dickie, who moments before had required the application of the ‘magic sponge’. Those of us of a certain vintage couldn’t help but recall, how this fightback had mirrored the old ‘Newlyn Chaos’ call, of the EDF Cup success season. Regardless – the system worked.

The remainder of the half saw both sides pressing for a lead to take with them into the changing rooms – with no success. Concluding as it did with seemingly over a couple of minutes still to play.

Ultimately it mattered little. Which was nice. The second period was in effect all Pirates whose energy levels visibly upped a notch. The Exiles making little or no impact on Pirate turf.

Post match – Coach Gav’ correctly observed – that the bench’s impact, had for the first time perhaps this season, been key to this. Even so it would be prudent to add that it was the ‘starters’ who broke the deadlock just prior to replacement activity.

McRae’s break, that only saw the back rower halted just 5m from the Scottish line, set up prop, Andrews’ score under the Newlyn posts. Jack’s reward was an immediate lie down in the dug out as the cavalry began their introductions with the hour mark reached.

There seemed increasingly from this point, no way back for the Londoners. As you’d expect they gave it their all to the end. But it was all to no avail, as some excellent handling gifted Wedlake with his sides bonus point try in the Old Western National Corner – and there were still over 15 minutes left to apply some icing. Albeit effectively for no further gain as elsewhere – Nottingham finally got to grips with a stubborn Carnegie to seal the group on tries scored.