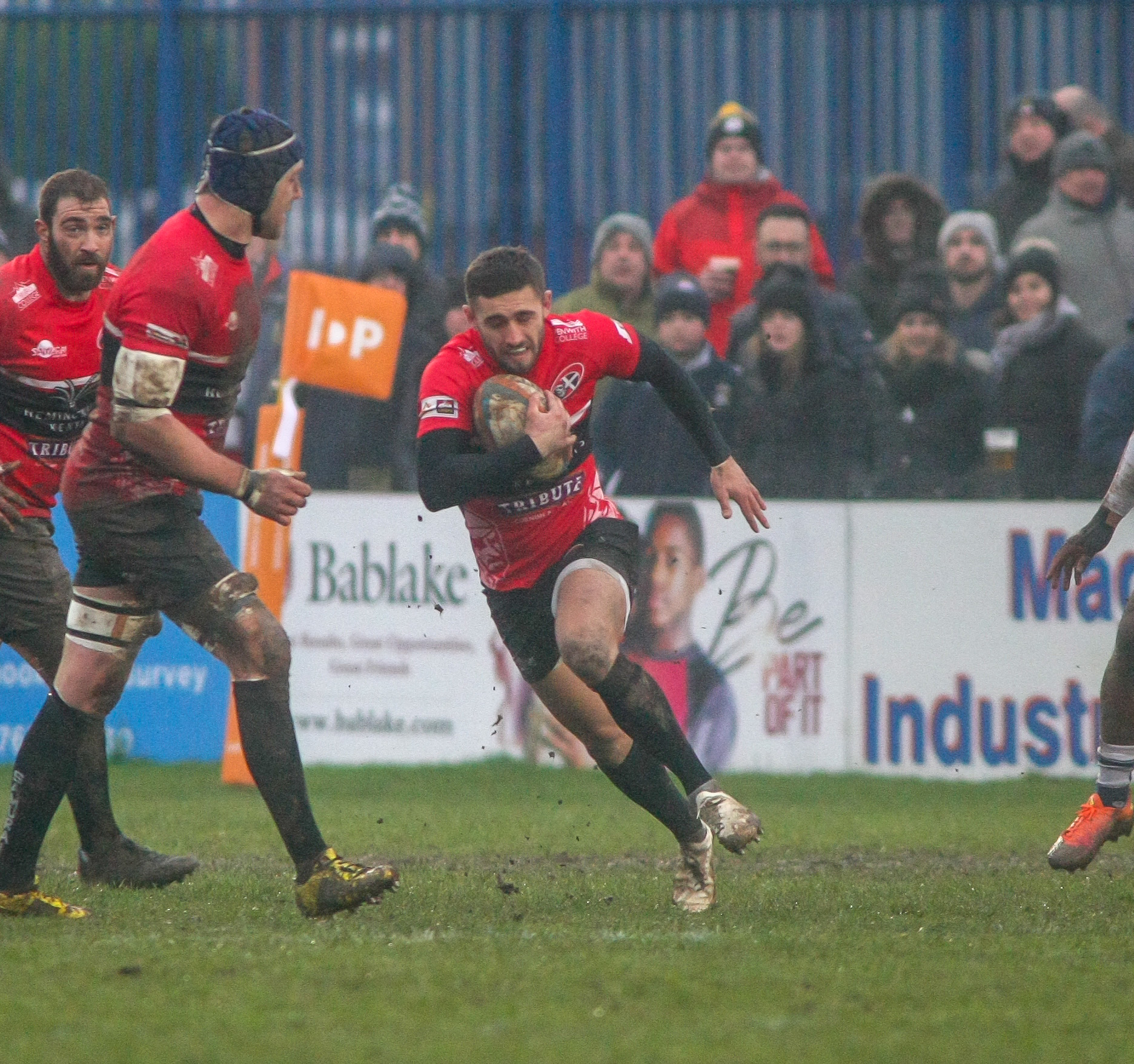 Pirates Get Back on Track

After suffering narrow defeats away to Yorkshire Carnegie and Coventry, the Cornish Pirates were understandably pleased to register this result in what was their first home game in 2019.

Although the Pirates starting backs were as featured at Coventry the previous weekend, in the forwards there were several changes. The back-row comprised the flanker pairing Matt Bolwell and Dan Lee, with James McRae at No. 8. Young Danny Cutmore partnered club captain Brett Beukeboom in the second-row and Tom Concu made his Championship at tight-head prop. As announced earlier in the week, however, Christian Judge was not available for selection, the prop forward having unfortunately picked up a leg injury since returning from his loan spell at Saracens.

On an afternoon that was windy, and cold, the bonus was that it was at least dry, with a good-sized crowd also present for such a fixture.

When match action began, it was the visitors who enjoyed the best of the opening exchanges. Playing with a good level of confidence and ambition their efforts were rewarded fly-half Sam Leeming successfully fired a penalty opportunity between the Penzance posts.
It was a bit too early to accuse the Pirates of needing a wake-up call, but they reacted nonetheless to soon hit back with a score of their own. It was skipper Beukeboom who delivered ball off the top of a line-out for then ball to then be smartly worked left. Wing Alex O’Meara tracked his way across and into the line and after a clever grubber kick led the chase for a touchdown at the old Western National corner. On a difficult day for kicking, fly-half Javier Rojas Alvarez was unable to add the extra two points.

Following a fine kick out of hand by full-back Kyle Moyle, the Pirates were soon threatening once more. Holding territorial advantage inside Hartpury’s ‘22’, and with scrum-half Alex Day directing matters, another score looked likely. Indeed, one would materialise, but it was one that went the way of the Gloucestershire side. Leeming had eased the pressure applied by the Pirates, and after a bouncing ball created problems for home defenders on the firmer than of recent Mennaye Field, it was flanker Mat Gilbert who with mitts on the ball took his chance to score a converted try at the Penzance posts.

Playing into the strong wind, the visitors must have been pleased with their efforts thus far, as they searched for their first success against the Pirates in this, an eighth meeting between the two sides. The level of their overall strength was perhaps unknown to many, though the name of former Gloucester, Toulouse and Montpellier back-rower Akapusi Qera demanded attention. Scrum-half Harry Cochrane was also proving a lively performer and at this stage of the contest there was a sense that they could just perhaps spring a surprise.

A response was needed by the Pirates, and they did just that, when former Hartpury player O’Meara crossed the line for his second five-pointer of the afternoon, this time at the Newlyn gate corner. Credit was also due to his fellow wingman Robin Wedlake, who selflessly provided the try-scoring pass.

Right on half-time the Pirates would score again. A chance of kicking three points from a penalty award was spurned, opting instead for a put in at the scrum. It proved a worthy decision, as from it they pressed forward and adopted a ‘pick and go’ game that was ultimately rewarded when flanker Dan Lee forced his way over near the Newlyn posts. Rojas Alvarez converted for the scoreboard to read 17-10 at the interval.

To score a try just before the break is always good, and it is better still if you can repeat the exercise right at the start of the second half. Well, the Pirates managed just that, but this time in completely different fashion. Another former Hartpury man in replacement wing Matt Evans scooped up the ball up and ran, his sudden burst supported by full-back Kyle Moyle whose bonus point providing try at the scoreboard corner was his ninth in the campaign.

It was now Hartpury’s turn to respond, and they did just that thanks to a converted try scored by their skipper Simon Linsell. However, the Pirates soon underlined their dominance with two more tries scored within the space of 10 minutes. Prop Marlen Walker made it over for the first, and then, following good approach work, including by flanker Matt Bolwell and Rojas Alvarez, it was Day who scored a converted effort at the Penzance posts.

Among the replacements being made young Jake Clemson, whose game has been developed on loan at Redruth, entered proceedings. He, like Tom Concu – who would be the adjudged man of the match – was also making his Championship debut.

A final try for the Cornish Pirates, their seventh of the afternoon, came courtesy of a converted score by replacement lock Toby Freeman, and although Hartpury hit back with a converted try of their own, scored by replacement hooker Luke Stratford (after his opposite number Dan Frost had been yellow-carded), the Pirates ended the match comfortable 41-24 winners.

As previously mentioned, we had been below par in our last two games, so it provided satisfaction to get back on track with what was for us an important win.

We perhaps needed to be a bit more direct at times but there were some real positives. The way the maul functioned was a real plus and getting a lot of joy from the set piece enabled us to create a lot of opportunities, resulting in us scoring seven tries to comfortably acquire five points. It was also especially pleasing that players such as Jake Clemson, Tom Concu, James McRae and Danny Cutmore entered the fray and performed well.