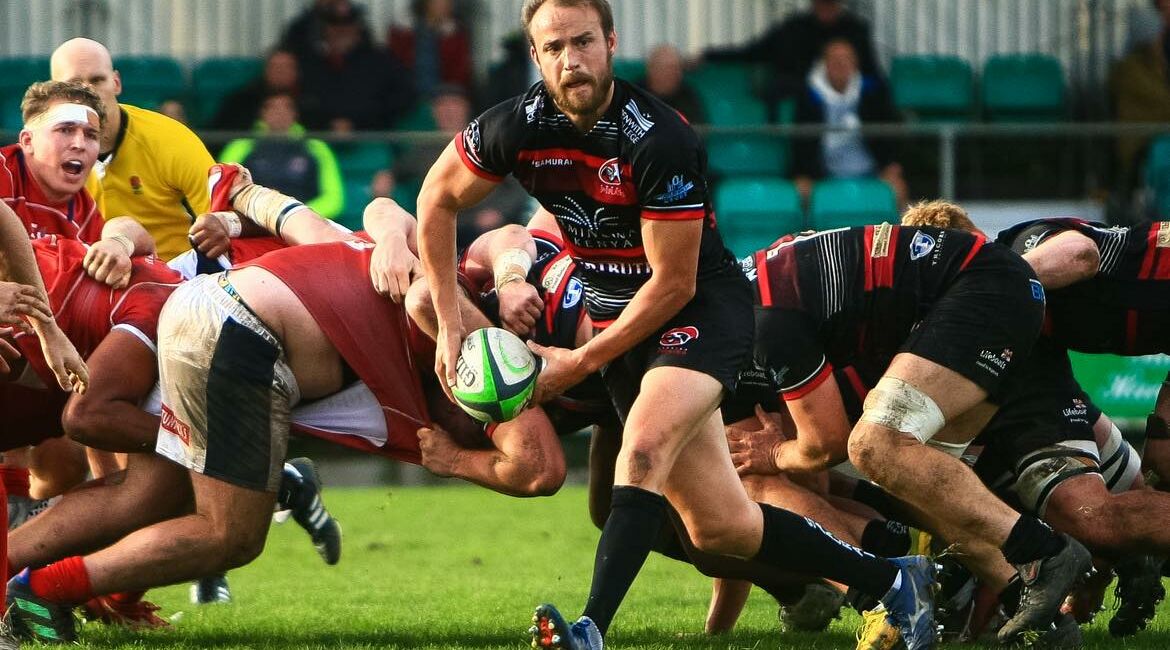 Yes, their visitors might have arrived at the Mennaye Field winless at the foot of the Championship league table. However, the Cornish Pirates still, and quite rightly, showed them respect ahead of this Round 7 encounter, before ultimately putting in a performance that had aspects to please.

Securing a four-try bonus point victory for the first time this season was an obvious plus, as was the good-sized crowd present on what turned out to be a bright and sunny afternoon.

The Cornish Pirates selection showed several changes in their starting XV from the line-up that ran out at Coventry the previous Saturday. A rejigged back three saw Carwyn Penny named at full-back, with AJ Cant moving to the wing, whilst making a quick return to fitness Robin Wedlake was selected in the number 14 shirt. In the forwards there was just the one change, where at number 8 Seb Nagle-Taylor replaced the unavailable Rusiate Tuima.

Following a minute’s applause to the memory of immensely popular and respected former player and stalwart official Paul Greaves, who had recently passed away, the game kicked off with the Pirates immediately slickly in action. Paul would have approved.

Early pressure built by the Pirates inside the Penzance ‘22’ would quickly gain reward, firstly with a penalty slotted by fly-half Arwel Robson and then thanks to a converted try scored by prop forward Marlen Walker. Swift movement of the ball left and right had led to the visitors giving a penalty away, which enabled the Pirates to go for a catch and drive line-out opportunity at the clubhouse corner. A first push for the line, though halted, led to London Scottish flanker Will Trenholm being yellow carded for a technical offence, and with another penalty awarded the Pirates their second attempt proved successful.

Overall, the London Scottish side was though guilty of giving too many penalties away, which was a trait the Pirates were pleasingly managing to reverse, and when the home side next applied purposeful pressure near to the line, it was young prop forward Harvey Beaton who suddenly spotted space to stretch and score.

The cause for the famous ‘exiles’ side was then hampered further when, following an excellent 50-22 kick by Robson, London Scottish replacement Zachary Clow was shown a red card by referee Mr. Selwood for illegally tampering with the ball. It had all proved a little confusing and was a rare case of a listed replacement being indirectly sent off before being used!

Taking advantage of numerical advantage before halftime, wing AJ Cant looked hungry for work and some fine interplay, initially by Robson and centre Rory Parata, led to a converted try scored at the Penzance posts by man-of-the-match centre Joe Elderkin.

So, 22-0 it was come the break, the match providing a level of entertainment expected, with hopefully more to follow in the second forty. We would see.

Settling into the second half, and searching for a bonus point providing fourth try, the Pirates extended their lead in the 52nd minute when all but two of their 15 players lent weight to a potent drive at the Newlyn gate corner which concluded with replacement prop Jack Andrew identified as the scorer.

That the Pirates would emerge winners, there now seemed no doubt, although they lost the services of yellow-carded scrum-half Ruaridh Dawson to the sin bin and London Scottish also threatened occasionally, including through a run on the right by replacement Viliami Taulini who was one of several Harlequins associated personnel in their ranks.

It took until all but right at the end of the game before the Pirates would score again, this time wide out the right when replacement lock James Fender applied the necessary downward pressure to record his maiden try in the club’s colours.

33-0 was a convincing bonus point win for the Pirates, their discipline had showed a marked improvement, and their defence had held tight. There was much to admire and following a last home win against London Scottish in February this year (19-0), the Pirates had ‘nilled’ their opponents once again.

“It was by no stretch of the imagination a polished eighty-minute performance, but we were pleased with the result and pleased with the five points, and there were many aspects of the game that were an improvement from previous.

“Of lots of positives, one of them was to achieve a big four try bonus point win, as at the beginning of the season we identified there were some games where we could probably push to do that and we hadn’t thus far before today, so that will give us the confidence that not only can we be pragmatic at the start of the game but we can also pick up the occasional bonus point.

“They put us under pressure at times in the game, but the guys dug in deep and managed to keep them out and prevent them from scoring, whilst our discipline was also much better. We have to say, of course, that our opposition didn’t stress us in too many areas but overall we take the result as being a big step forward.”