When David Lemi completed his hat-trick of tries in the Old Western National Corner – with only 7 minutes of second period ticked off – most sensible people would have concluded, that Bristol’s afternoon in West Cornwall was a done deal. 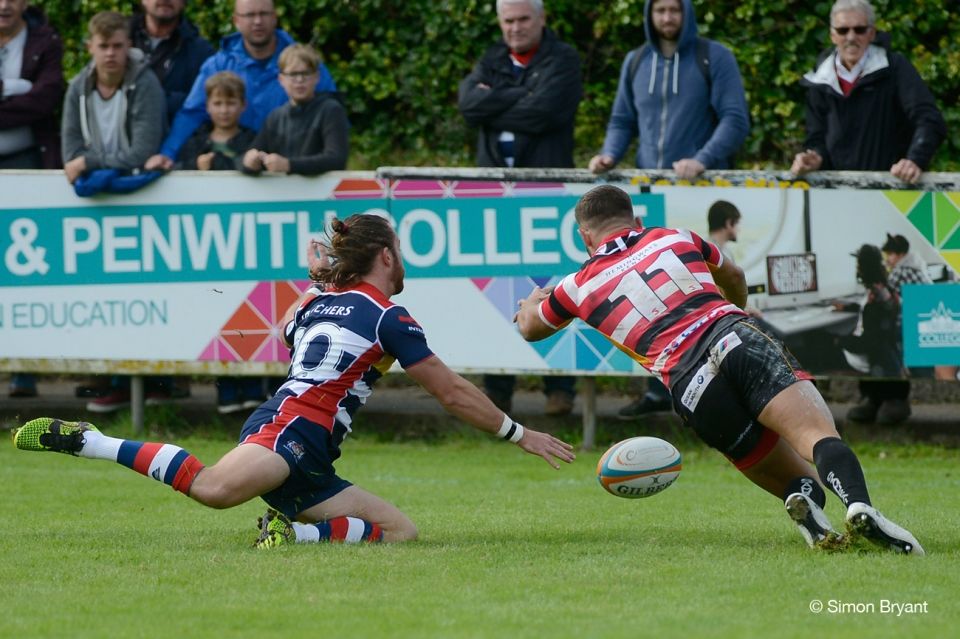 The winger’s skillful handling under pressure from opposite number, Alex O’Meara, provided a fitting completion to Ian Madigan’s pinpoint crossfield kick. The Irish inernational fly half having also already slotted a penalty either side of the break to now extend the visitor’s lead to twenty points.

The four try bonus point was in the bag and everything was looking rosy for the Championship’s red hot promotion favourites. Nothing could deny Pat Lam’s chaps a pleasant journey back up the M5 – and the luxury of looking forward to their next outing a week hence. Could it?

Actually yes as it subsequently transpired – as the Cornish Pirates finally shook off any inferiority complex that may have hindered their performance hitherto – and produced as thrilling a half hour of rugby, that the home faithful could have wished for. Even if it did just fall short of the grandstand finish, that no-one would have bet against as momentum dramtically swung in the host’s favour.

In truth it had begun well for the Cornishmen, when O’Meara gave them a dream start – with a try in the 3rd minute that didn’t flatter in those early exchanges.

Lemi’s dot down in the Scoreboard Corner ten minutes later was – however – the signal for last season’s relegated Premiership club, to ramp up the pressure.

Their pace, handling and sheer physicality, made Luke Morahan’s try in the opposite corner an inevitable outcome only five minutes later.

Bristol had found another gear or two and – while Laurence May’s 26th minute penalty reduced the gap to only two on the scoreboard – the gulf between the sides showed truer colours when Lemi became Bristol’s all time top try scorer moments after.

Fast forward now to what became the pivotal moment of the game – but not in the way that Bristol’s travelling support would prefer to recall. Lemi’s hat-trick and what should have been the point of no return for the Pirates.

From nothing there appeared to be a sea-shift in ascendancy. A token response and a penalty try at the Penzance End for the hosts – seemed to have been countered with Madigan’s 3rd penalty.

There was still over half an hour remaining – and the Cornish side’s deficit was now back down to two scores. Conventional thought would suggest a ‘caution to the wind’ approach, that would be punished by Bristol’s ability to exploit the gaps that would surely now appear.

Au contraire. Instead – not only did the Pirates grow in confidence – their patience in the face of some ferocious defence paid dividends.

Prop, Marlen Walker, rounded off some sustained pressure, with a try that Will Cargill expertly converted. Then the replacement fly half’s deft grubber gifted Kyle Moyle with a second, converted score in less than five minutes.

Ten of things still remained too. It was as if the replica galleon anchored in the Bay had fired a salvo of cannon at the visitors with devastating effect.

The dream finish – and further legend added to the visitor’s growing dread of visiting their ‘bogey’ side in the far west. Two bonus points will suffice for now however – and rarely before was a loss so joyfully taken.