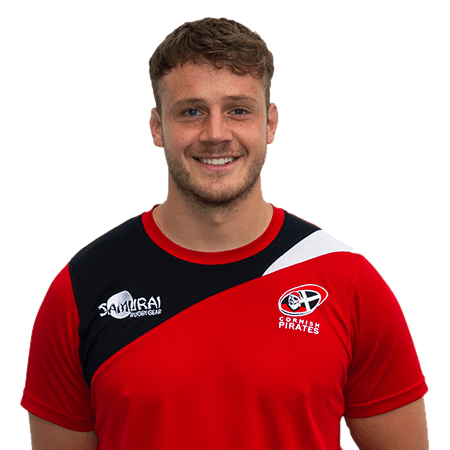 If there was any doubt before today’s Championship thriller – the Cornish Pirates and Bedford Blues do not ‘do’ dull! Which makes the prospect of their cup clash at the Mennaye in three weeks, enticing to say the least.

In the here and now though – it was the Blues who were savouring the post match autumn sunshine the most. Mike Rayer’s men hanging on by their fingertips to their one point advantage – in the face of a Pirates onslaught that wasn’t sparing the horses.

To be truthful, the visitors perhaps just edged matters over the full eighty minutes – although their ability to crack a fiery Cornish defence stifled their ambition at times. Most notably in a first period where USA international fly half, Will Hooley’s right peg, was given priority to reward their possession & territory. Three penalties and a conversion of Richard Lane’s 25th minute try doing sufficient damage give them a half time lead.

The Pirates in the meantime, mainly struggled in the opening forty to find any kind of rhythm or gain any kind of foothold. Sam Matevesi’s early try, surely gave the hooker reason for celebrating his Fiji call up – coming as it did from a flowing move involving, Strong, Cargill and Day. But this – apart from Kyle Moyle’s near miss in the hosts’ only other real attacking move – was to be the highlight. A misfunctioning lineout did little to aid the cause either.

After the break though and things did improve from the whistle – once the officials had rather suspiciously appeared from the Clubhouse.

Early pressure was sustained and Moyle’s first try of his brace wasn’t undeserved – the full back exploiting a gaping hole in Bedford’s 22 – to reduce the deficit to only the one point. The players sensed it and so did the crowd that it was now game on.

The Blues although now more of the cosh were still a threat. Ryan Hutler’s try under the Penzance posts at the half’s midway point serving as a timely reminder.

But the momentum was swinging back towards the Cornishmen – although it was to be the introduction of some South American flair that triggered the Pirates into more decisive action. Argentine Alverez’s debut began with a bang as firstly a jinky run promised goodies.

Moyle meanwhile pounced, as he terminated a game of kick tennis that had developed – with his now customary long distance score. Albeit on this occasion it was from relatively close in – namely halfway. With less than a quarter of an hour to play and Cornish tails were most definitely up.

Tails briefly had to be tucked between legs as Blues’ wingman, Adamson, intercepted in his own half to break up a promising Cornish attack. Dean’s gallop to the Penzance posts was a blow to the homester’s ambition – but they were not be denied a chance to snatch a memorable win if they had any say in the matter.

Javier’s second contribution duly rekindled hopes as he skipped, bobbed and weaved his way into the Bedford 22. His progress was eventually halted but with fellow replacement, Alex Schwarz on his shoulder – the young scrum half was not to be denied in making it a one point game again.

Time was ticking by but there was sufficient for hopes of a grandstand finish still. Third place in the league was already guaranteed – but after last weeks disappointment in the Channel Isles – a win was what the Pirates really desired.

They pressed and even suppressed some Blues pressure with time almost up. One last thrust with Pirates bodies being flung into the fray with abandon almost provided the perfect finish. But contact inside the Bedford 22 once again resulted in a spilt pill forwards and two bonus points would have to suffice. The consolation now is that it’s ‘only’ London Irish away next Saturday….