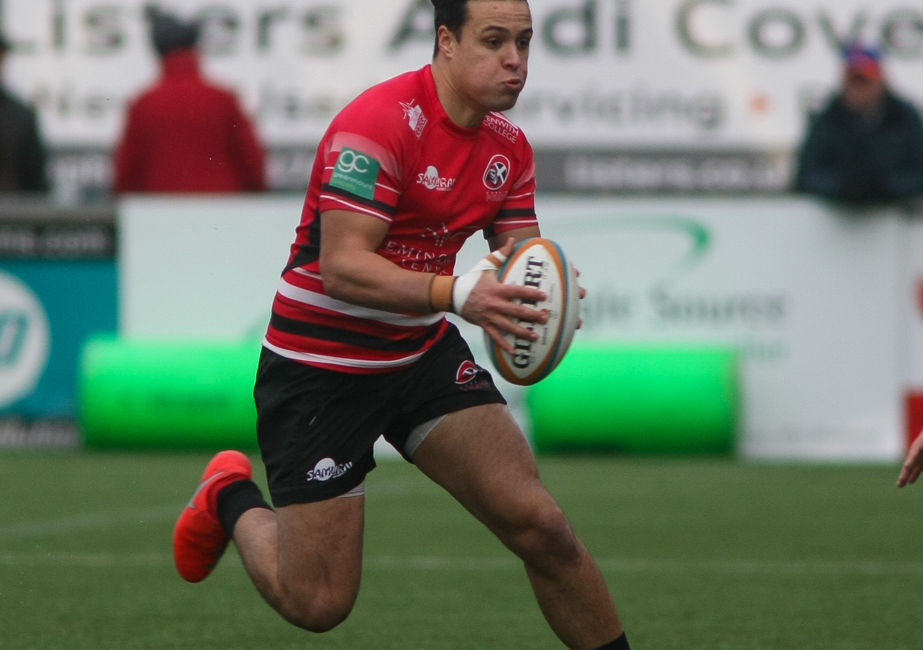 Storm Ciara had thrown some doubt as to whether this game would even take part right up until the morning itself. But with the pitch relatively unaffected and something approaching a lull in the ferocity of the wind – the call was made to go for it.

A decision that was rewarded with a far better contest than many would have predicted. The hosts’ bagging the full five points in the process – to secure 3rd spot in the standings and maintain their pressure on Ealing a place above. An ideal response to last week’s frustrating loss on the road at Coventry.

Callum Patterson’s hat-trick of tries obviously stood out as the difference between the two sides – whilst winger, Alex O’Meara’s brace – served to put the cream on top of the jam, for a performance from the home side that shouted loudly over the roar of the gale of almost total control.

Spare a thought then for goal kicker Javier Rojas Alvarez – who must have been spitting bolas’ – as to their insistence on dotting down out wide on such a day. The fly half having to settle for only the one 2 pointer – which at least took his tally to 101 and with it the league’s top points scorer status.

And yet this otherwise near perfect day hadn’t seemingly begun so well – and despite an encouraging opening four minutes – which saw the Pirates work play though some 30 phases from deep in the 22 – up to their opponents own 22. A knock on with the Knights’ defence creaking, lead to firstly a scrum – then penalty – that took play back to the Cornish 10m line – and another penalty for the visitors. Sam Olver’s strike from 45m sailed through the swaying uprights and no doubt into the arms of one of the ball boys strategically positioned between the Mennaye and St Michael’s Mount. First blood to the Yorkshiremen.

That though proved to be the highwater mark for Donny in the first period – as the Pirates basically shrugged this off and picked up from where they had started. Namely enjoying all the important stats and playing with flair and a freedom that playing into a strong wind, would normally prohibit.

The response was almost immediate from going down three. Caulfield’s charge down in Donny’s 22 had the visitors in all sorts of commotion which Parata’s kick ahead only worsened. Callum did the rest.

Seven minutes later and Callum did the rest again – after a missed touch finder from Knights’ Olver – was pounced upon and punished by some excellent approach work from Moyle & Channon in particular. Javier’s second pot at goal swirled wildly towards the Newlyn posts at all sorts of crazy angles before meekly giving up the ghost just short of it’s objective.

The Argentine’s next attempt defied the odds and dissected it’s moving target with half time. Appropriate given the quality of O’Meara’s finish in the Old Western National Corner as half time loomed – the winger carving a gap through Donny’s defence from 35+ metres out.

At the turnaround then, the visitor’s task looked increasingly difficult as Ciara decided to puff that bit harder into their faces. Clearly she had won the toss and decided to play towards the Penzance End for the full 80. More so as their first incursion into Cornish territory only came about from their restart on the hour mark following Patterson’s 3rd try and crucially the Pirates’ bonus point bagged.

Credit where it’s due though as Donny heads refused to capitulate. Their reward – a try from replacement back rower, Joe Sproston – and quickly converted by Charlie Foley. As with ten minutes remaining – stranger things could happen.

Sadly for them it wasn’t even to be a losing bonus point for their troubles. The hosts duly resumed control to finish the game with a flourish and O’Meara gratefully falling over the line in the Clubhouse Corner.

Ciara upped her game too the moment the man in the middle – Alex Thomas – ended proceedings, to allow a hardcore crowd their leave and retire to the shelter of the bar. Proper job!