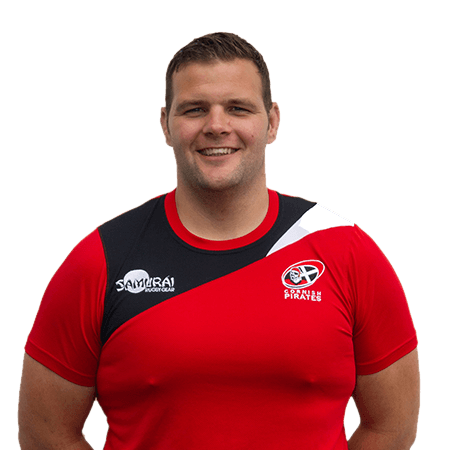 Locking arms once more, matches between the Pirates and the Blues are invariably competitively entertaining affairs, as yet again proved the case. It was also, once more, a truly great advert for Championship rugby.

Third in the division, the Blues arrived in Penzance on the back of an impressive 33-7 win at home to Hartpury RFC. They also had an experienced line-up, including former Northampton Saints and England (18 caps) scrum-half Lee Dickson, and ex Cardiff Blues and Wales (9 caps) full-back Chris Czekaj.

For the Pirates, who were seventh in the league table, their selection included a Championship start for wing Nicolas Coronel, whilst in the forwards there were returns for Tom Lawday and Josh Caulfield. A present shortage of fully fit hookers also saw the arrival, on loan from Taunton, of former England under 18s player Dan Frost, with Danny Toolan again named among the replacements. Back from international duty with Canada there was also a place on the bench for Brett Beukeboom.

Reaching the halfway point in the Championship season, the visitors opened the scoring in the eleventh minute when good inter-play involving Dickson and former Pirates lock Will Carrick-Smith ended with a try scored by wing Dean Adamson. Wearing the number 11 shirt it was also an eleventh of the season for the league’s top try-scorer, to which fly-half Will Hooley added the extras.

The Blues continued to threaten, their running and passing impressive, with support always on hand. Credit to the Pirates, therefore, for matching the challenge and then applying the throttle to earn a well-deserved penalty. Playing the advantage fly-half Will Cargill almost dummied his way for a score, before settling to kick the three points on offer.

Supporters likely expected this particular contest to provide no shortage of thrilling rugby, and right from the restart a sample of expectation was confirmed – and how! Taking the ball on halfway, Lawday appeared to fill his lungs with energy required, to then blast a path that would see him score a quite superb try at the clubhouse corner. Cargill’s successful conversion from out wide wasn’t at all bad either.

Sparked into a response, further good play from Dickson and his skipper Michael Le Bourgeois led to a second try in the match for Bedford, this time one dotted down at the Newlyn gate corner by Bourgeois’ centre partner Richard Lane, who made two appearances for the Pirates back in 2014/15, when dual-registered with Bath Rugby.

Bedford’s score nudged them back in front, however it was the Pirates who would regain the lead come the break, their adjudged man-of-the-match, prop Jack Andrew, scoring a converted try to the right of the Penzance posts. 17-12.
Such a competitive game was inevitably a little feisty at times and, following a fracas early in the second half, referee Mr. Woodthorpe felt obliged to call both captains together. To take a little heat out of the moment, the tannoy system echoed the sound ‘Give Peace a Chance’.

Eleven minutes into the second period, another example of clinical finishing saw Bedford wingman Elliot Clements-Hill breeze in at the scoreboard corner, his effort drawing the scores level at 17-all.

Now was the time when both teams started to regularly introduce replacements into the action, but with there no drop off in intensity. In a match where there was no quarter given, the commitment from both sides was tremendous to witness, this yet another game too close to call.

Under the glow of the floodlights, as the Pirates strived for a strong finish, replacement centre Dan Koster tore into Bedford’s ‘22’, with Coronel also going close to scoring out wide on the left.

Sound scrummaging from the Blues rescued them on a couple of occasions, however the Pirates efforts to batter Bedford into submission were eventually rewarded. They had displayed admirable patience and control, aided by replacement Beukeboom’s experience, and it was debutant Frost who scored a final converted try to celebrate his first appearance in a Pirates shirt.

The win for the Cornish side sees them move up one more place in the league table to sixth, whilst Bedford stay third.

One man delighted with the performance and the result was Cornish Pirates coach Alan Paver, who post-match commented:

Gavin and I are absolutely over the moon, as the build-up in the week was tricky and we had put the guys through the mill to prepare to our best. Credit to young Dan Frost for stepping in at hooker and it was great that we all pulled together and showed such commitment and endeavor.

Seeing us push through at the end was just unbelievable, as Bedford are a fine side and are third in the table because they deserve it. Saying that, though, the Mennaye is our friend and we played a lot of field position in the second half and it told. Yes, there were perhaps a couple of chances we could have taken and didn’t, but the accumulative pressure was so pleasing, as was the emphasis we put on our discipline.