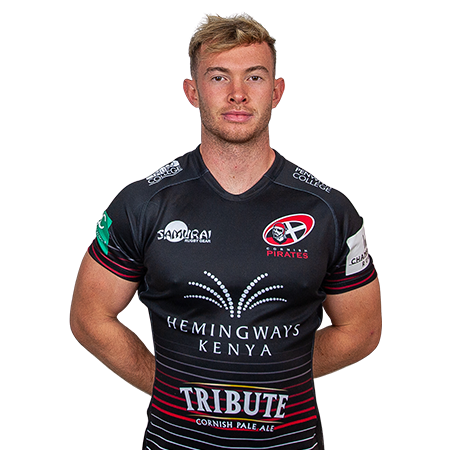 Heightened near end of season excitement, and along with it no doubt tension, is guaranteed for the Cornish Pirates after they recorded this ultimately thrilling victory.

Squaring up to each other at the Mennaye Field, these two teams fought a thoroughly competitive contest, with the Pirates not only holding on to their unbeaten home record in the league this season, but at the same time making it a first league match ‘W’ against the islanders since recording a 16-10 result in December 2015. Also, as a real bonus, the Pirates moved up a place to second in the RFU Championship.

Changes in the Pirates squad for this game saw Jack Andrew selected at loose-head prop and Caleb Montgomery on the blind side berth. Matt Bolwell moved to the open side, whilst fresh faces on the bench were those of backrower Will Gibson, prop Sam Rodman, and hooker Syd Blackmore.

After Jersey Reds kicked the game off playing towards Newlyn, handling errors gifted the visitors two eagerly taken scoring opportunities. For the first, lock Macauley Cook was able to canter in for a try to left of the Newlyn posts, and then, following wing Ryan Olowofela’s run on the right, it was centre Dan Barnes who burst through to score. Both tries were converted by Barnes’ midfield partner Scott Van Breda.

With sudden mizzle enveloping the ground, a 0-14 scoreline after just nine minutes was evidence of an uncharacteristically miserable start for the home team, whose supporters were left confusingly silent, almost as if shell-shocked.

Thankfully, the Pirates would start to make an impact on the game, with lock Josh Caulfield and No. 8 Tom Duncan to the fore. Then, after a catch and drive opportunity arose at the scoreboard corner, it was hooker Tom Channon who was identified as the scorer of a try that was converted by fly-half Arwel Robson, Yes, it was a relief, plus it provided real encouragement, however after flanker Matt Bolwell was sent to the sin bin, a penalty by Van Breda brought the half to a close with the score reading 7-17.

At the start of the second period, the Pirates were once again guilty of putting pressure on themselves, their performance overall surely demanding a lift. Well, the figure to suddenly deliver on that front was prop Jack Andrew who carried the ball strongly and helped provide encouragement. He might not have scored, but from a driving line-out soon after at the Newlyn gate corner, it was than man Channon who was on the scoresheet again as he remarkably registered his twelfth try of the season. Robson was also once again successful with his conversion attempt.

The Pirates were now fully in gear, their purpose and effort obvious to see. They tackled with hustle-like determination, at the line-out the Tom Channon-Danny Cutmore conveyor belt provided clean possession, and after wing Carwyn Sirker gathered a high ball and linked with full-back Carwyn Penny it again gave the crowd a lift.

Into the last quarter it was still anyone’s game, but with the Pirates in the late winter sunshine suddenly looking the likely winners.

Cheered on by their enthusiastic supporters, it was a converted try scored by replacement scrum-half Tom Kessell that put the Pirates in front for the first time in the match, and then all about thought that a bonus point try had been scored by replacement wing Robin Wedlake at the old Western National Corner, which was unfortunately ruled out.

In time remaining, the Reds had an opportunity to snatch a win, but it was not to be, as the Pirates held on to record a thrilling victory, and at the final whistle the good old ‘Mennaye’ well and truly rocked!

Joint head coach Alan Paver had said pre-match that the team always strives to make the Mennaye Field a fortress, and on occasions such as this it was so clearly evident.