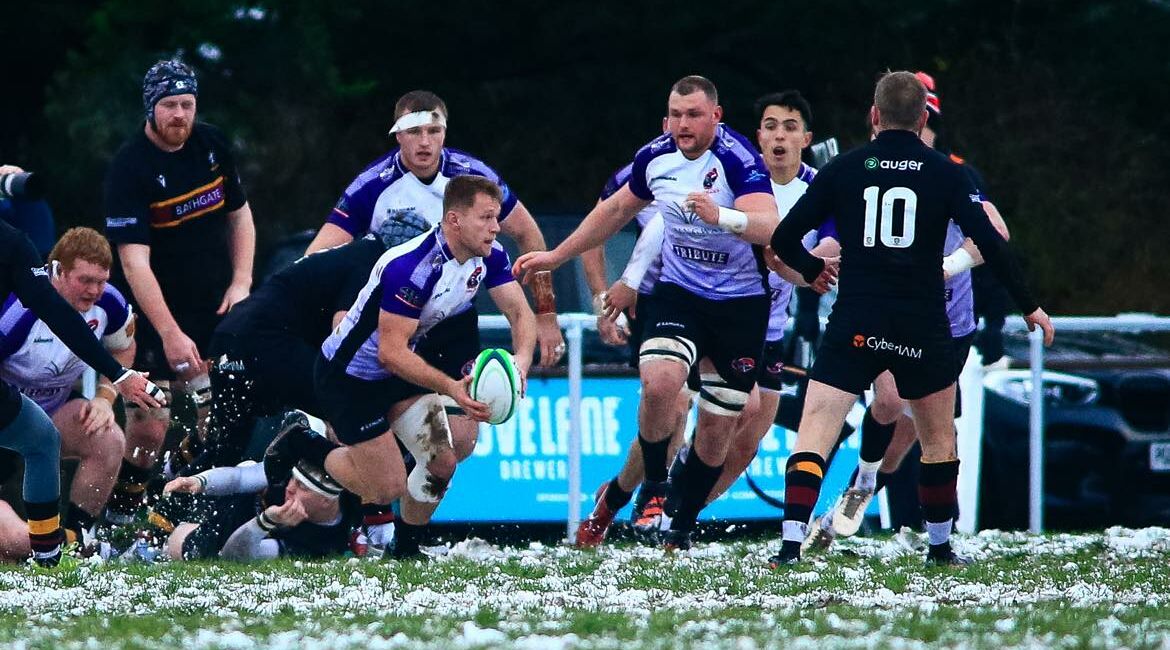 Playing this Round 9 game in the RFU Championship away, which followed a first ever meeting between the two sides at the Paton Field ground in November, when the Cornish Pirates won 26-7 in the Cup, in the league at cold Caldy the home side emerged narrow 15-14 winners.

The Wirral based home side, nicknamed ‘The Ravers’, had proved doughty opponents on their own patch in that first ever meeting, and the Pirates were aware not to take anything for granted in this eleventh versus seventh clash, as they went in search of their fifth league match win of the season.

Changes from the selected starting XV that ran out against Ealing Trailfinders the previous weekend saw Carwyn Penny named at full-back, with AJ Cant moving to the left wing in place of the injured Arthur Relton. There was also a late change in the centre after Tommy Wyatt had to withdraw because of sickness, his place taken by Shae Tucker. In the pack Olly Adkins was ready to make his first league start of the season at loose-head prop, whilst Rusiate Tuima made a return at number 8.

Following early morning snow and a slight delay in kick-off after the Pirates had arrived late at the ground, the Pirates got off to an encouraging start. Tuima firstly concentrated Caldy defenders and then, after being awarded a penalty five metres out, it was alert scrum-half Ruaridh Dawson who quick tapped and scored the game’s opening try. Fly-half Arwel Robson added the extras.

With smatterings of snow on the field, the cold and damp conditions were less than ideal, and it was perhaps of no surprise when home full-back Elliot Gourlay was luckless with a penalty kick at goal when an opportunity came his way.

It was apparent in the early stages that the Pirates had the edge at scrum time, and after Tuima carried off the back the ball found its way to Tucker who scored a converted try under the posts.

Caldy looked to respond and, after centre Mike Cartmill found space to run, he was, to the relief of faithful travelling Pirates supporters, bundled into touch. However, points would soon come the way of the home side when Gourlay was successful with his second penalty attempt of the afternoon.

Leading to half-time there was a spell of kick tennis before the Pirates were awarded a kickable penalty. Feeling confident, however, they opted to kick for the corner, only to knock the ball on at the resulting line-out, for half-time to arrive shortly after with the score reading 3-14.

The Pirates had faltered in the second period seven days earlier and, when play got underway again, they were under pressure once more.

Caldy had a strengthened side to the one that featured in the Cup, including selecting the Dickinson brothers. Number 8 ‘JJ’ is a long-serving talismanic leader and experienced lock Sam, who has in the past achieved Premiership honours with Northampton Saints, was proving disruptive in the line-out. In centre Dan Bibby and wing Nick Royle they also possessed two former England sevens men and, after Caldy’s flanker Martin Gerrard firstly grub kicked forward, it was prolific try-scorer Royle who kicked further ahead and scored out wide to quickly reduce the deficit.

Soon on the attack again, an increasingly confident looking Caldy strived to seek more points, their cause aided when the Pirates went down to 14 men after wing Callum Sirker was yellow carded for an apparent deliberate knock on.

The Pirates initially survived another Caldy scoring attempt as the pressure upon them became immense. But, on the hour mark, some fine work by the home pack led to the ball being spread wide through the hands of Bibby to enable Cartmill to score. Gourlay then stepped forward to duly convert and put The Ravers in front for the first time in the match.

Now was a real test for the Cornish team, as the clock ticked away, with their cause potentially helped after a red card for dangerous play was shown to replacement Adam Aigbokhae. Could the Pirates take advantage in the final minutes of the match? Well, giving penalties away was of no help and ultimately provided a boost to Caldy, whose team and supporters were at the end understandably delighted to record their first home league match win of the season.

For the Pirates to settle for a losing bonus point was little consolation, as it was the win that was naturally sought.

Speaking at the end of Saturday’s contest, Cornish Pirates’ an honest as ever joint head coach Alan Paver commented:

“I don’t want to keep saying a game of two halves, but it really was, and I must first and foremost congratulate Caldy upon their spirited performance and deserved win.

“For 40 minutes we looked really in control, our field position was good, the set piece was working well and then it was almost a carbon copy of last week as we lost momentum in the second half and were unable to regain it. The guys are bitterly disappointed, as we are as coaches.

“We need to control key moments, that could be managing penalties in key areas, and also the line-out which is normally a strongest part of our game but didn’t function to a high level this week. We couldn’t really control the ball, and I think that when we got stuck in the kicking game in the second half there were a couple of times when we needed to diffuse some of the aerial stuff, but we weren’t able to so, unfortunately, it’s much of the same and we simply need to get better.

“There are some good leaders out there and our skipper John Stevens is exceptional, but he cannot do it on his own and it is obvious that some form of leadership development is needed within the whole of the squad. John is, at present, trying to drive that forward, as we are as coaches, so again I would expect us to be better next week, and the hope is that at some point we’ll get over this patch. Extremely frustrating at present, we just need to get better and look for an 80-minute performance. It doesn’t have to be perfect but there has to be control in there and we need to improve in all areas, and then at some point you win games and end up in the top half of the league and eventually you end up in the top four and then push for promotion. It’s not rocket science. It’s just a painful process that you have to go through.

“The players are having some fantastic coaching and some really good exposure, as the Championship is still a fine competition and, at some point, they will come through. Now, when that will happen, on mass, we’ll see. I thought we were over it and away we go but obviously we are not there yet.”