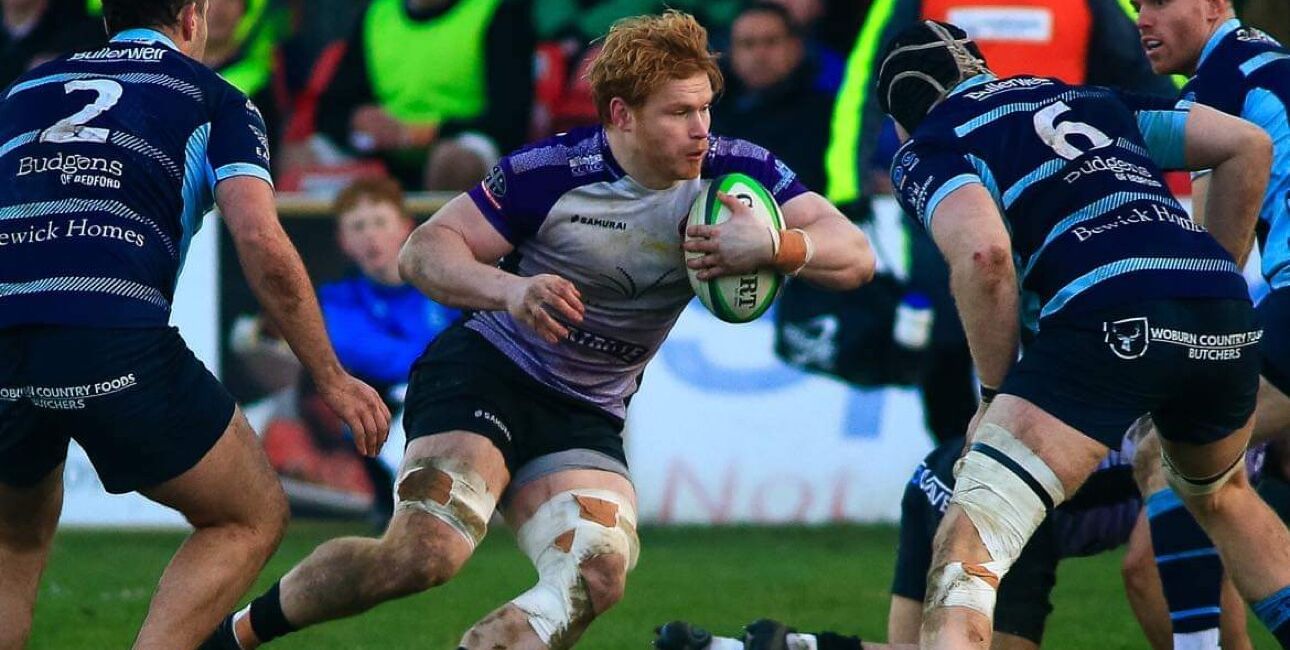 For the Cornish Pirates, this fourth versus seventh in the league clash at Goldington Road, where the Blues are unbeaten at home in the Championship this season, was always going to be a tough ask.

It also marked an impressive double for the home side, remembering that they had won 41-21 when the two teams met at the Mennaye Field back in September.

Ahead of this game the Pirates were aiming for an encouraging performance, to at least in part reflectthe quality witnessed in their two opening wins recorded in 2023 against Doncaster Knights and Nottingham. On the day, sadly, it was just not to be.

Fly-half Arwel Robson returned to the starting line-up for the Cornish Pirates for this encounter, as didtight-head prop Matt Johnson and number 8 Rusiate Tuima whose inclusion saw Seb Nagle–Taylor switch to blindside flanker and fellow backrower Alex Everett named in the ‘7’ shirt. For full-back Will Trewin, who had impressed in his appearances ahead of this game, it was his first start in the league.

The Pirates kicked off playing down Goldington Road’s notorious slope,

but it was the home side who were quick to open the scoring when good play from full-back George Hendy and wing Matt Worley led to the latter scoring a try out wide which was well converted by fly-half Will Maisey.

Shortly after the restart a James Fender charge down led to the Pirates applying pressure close to Bedford’s line. A penalty award to the visitors soon resulted with Robson stepping forward to make it 7-3.

and, after another penalty kick at goal opportunity suddenly arose, Robson made no mistake to reduce the deficit to just a single point.

Sadly, however, several setbacks followed. Firstly, the Pirates lost the services of scrum–half Ruaridh Dawson through injury, then it was Worley who crossed the line for his second try. Next, to add to Pirates’ woes, centre Garyn Smith was yellow carded by referee Mr. Thomas.

Matters then got even worse, as further good play by the Blues resulted in a try scored by number 8 Tui Uru. The league’s top points scorer Maisey once again added the extras and with a quarter of the game gone the score read 21-6.

Now was a big test for the depleted Pirates, so there was credit that from a driving maul it was replacement scrum-half Alex Schwarz who nipped in for a try converted by Robson.

Of no surprise Bedford’s skipper Alex Day, a one–time Pirate, and former Wasps’ centre Michael Le Bourgeios, who is nowadays a player/coach at Goldington Road, were proving influential in this match, as was the clinical kicking of Maisey whose penalty on 33 minutes extended the home team’s lead.

Approaching half-time, further impressive play fromthe Blues saw them build pressure and score their bonus point providing fourth try. It was bullocking prop Joey Conway’s direct run that saw his name added to the scoresheet for a converted try that made it 31-13 at the break.

The Bedford team’s performance had been clinical in the first half, and one much enjoyed on a sunny afternoon in front of a bumper crowd. Could the Pirates make their back into the match? We would see.

Unfortunately, it was not long into the second half before the Pirates went further behind. Loose lips hadled to them being marched back 10 metres, and from acquired territory Maisey was ultimately able to slot a simple penalty kick on offer to record the firstpoints of the second period.

The Pirates responded positively from the restart and were soon pressing deep inside Bedford’s half. Hopes were high for a score, with their efforts cheered on by their faithful travelling band of supporters.

There was a brief delay as centre Rory Parata had to be replaced, but a chance of a second try from an attacking scrum right in front of the posts looked ‘on’. Players who pressed hard included Tuima, skipper Will Crane and wing Tommy Wyatt, before Fender was adjudged to have been held up.

With an opportunity not taken by the Pirates, when the Blues next had chance for points they delivered with good handling ending with a try scored by lock Robin Williams. Faultless off the tee all afternoon, Maisey did not disappoint with his final kick.

Floodlights now on, both sides emptied their bench in the last quarter, and Bedford took their score past the 50-mark thanks to tries from wing Dean Adamson and flanker Luke Frost. Replacement fly-half Lewis Grimoldby converted both and it was game over.

Bedford had held strong throughout the second forty, as the Pirates were simply unable to breach thestubborn home defence, with the final

55-13 scoreline listing a rare hefty defeat for the Cornish side.

“It was an extremely disappointing result as we came up in good spirit and we thought we could give a performance that would give us an opportunity to get on the right side of the score.

“Sadly, we looked sluggish early on and Bedford came at us pretty hard. A couple of tries scored early doors looked like they had walked through us, and we need to look carefully at that.

“Overall, we got beat and beat well. They looked really creative and dangerous, their back three moved around well, they were offloading and looked like they could penetrate us almost at will at times,and even though we were going through the phases we didn’t really have enough penetration or firepower to put them into any kind of danger.

“Our set piece didn’t really factor, we couldn’t get firing in that area and we got beat fair and square by a far superior side.”

“We have to take a look in the mirror, as there is no escaping the final scoreline or the performance. We have to look at this and have to ask why did this happen, was our preparation correct, was our selection and tactics going in correct, or was it one of those days? We hope it was, and we have to quickly turn this around because we have a massive game at home next week (against Jersey Reds) and whatever we may think about this performance we have to identify what we can take out of it and move on extremely quickly because we can’t have this happen again.”