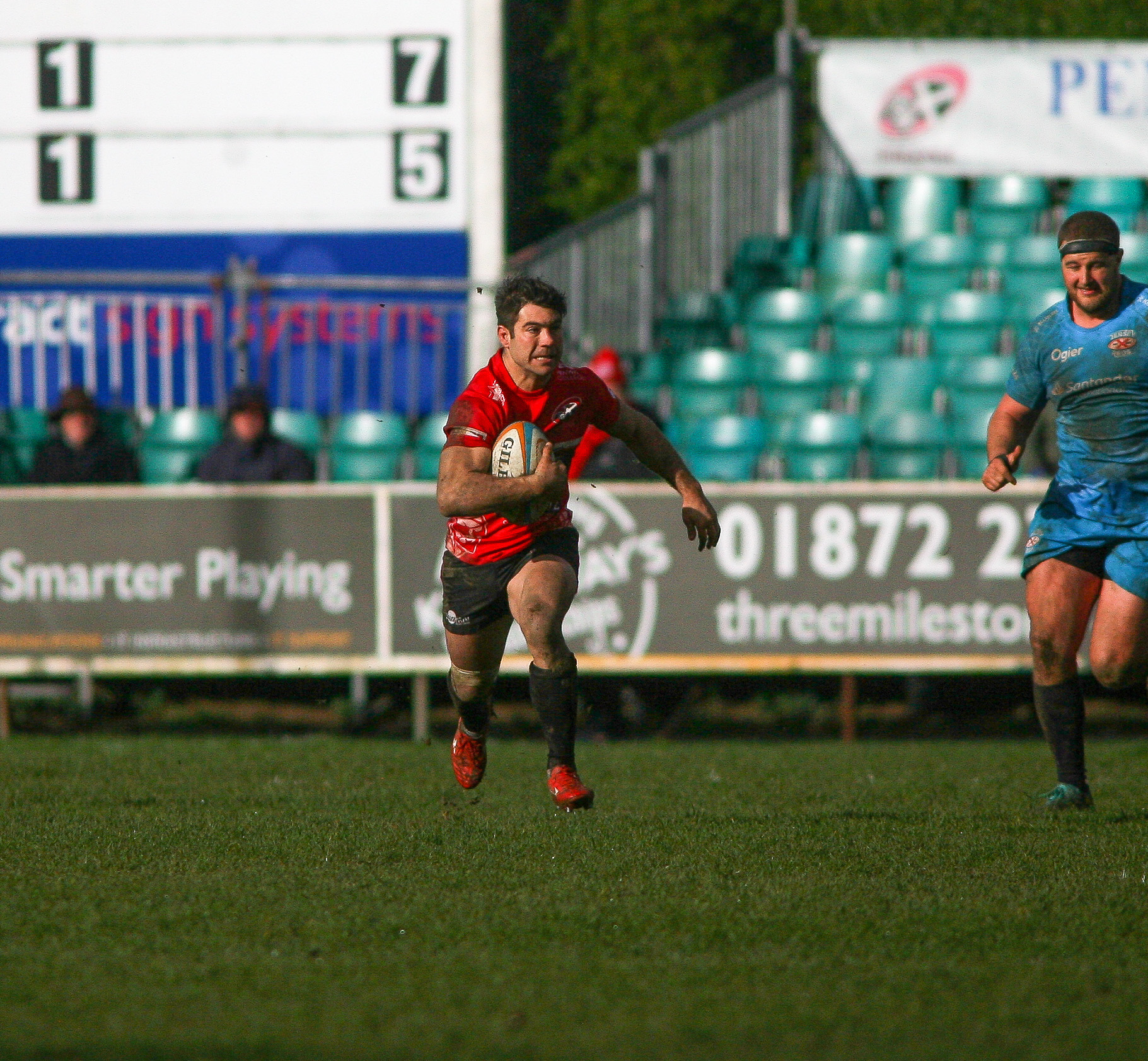 For this 4th versus 5th Greene King IPA Championship fixture, on a perfect afternoon for playing rugby football all the ingredients appeared right to anticipate a high-scoring and entertaining contest. Many indeed have been between the sides over the years, however from a Pirates perspective this one provided disappointment.

There were just two changes in the Cornish Pirates line-up from the side that was narrowly defeated by Jersey Reds last time out, a fit again Robin Wedlake returning on the right wing and Alex Schwarz named at scrum-half.

In front of a large home crowd the Blues got off to a perfect start, their skipper and former England scrum-half Lee Dickson in the very first minute taking an opportunity to catch the Pirates out.

Spotting the visitors had nobody home at the back he threaded a kick into space, his awareness enabling wing Dean Adamson to follow through and score his thirteenth try of the season. Adamson’s effort also, for the immediate present, made him the league’s top try-scorer this season, and fly-half Will Hooley added the conversion.

Playing with the slope, a first chance for the Pirates to acquire points followed a terrific midfield run by wing Robin Wedlake who showed an accustomed mix of pace, strength and determination to make yardage. Full-back Maliq Holden lent support, however the Blues managed to deny the Pirates with a last-ditch defensive effort before they extended their lead thanks to a penalty slotted from 40 metres by Hooley.

In looking to create scoring chances themselves, the Pirates next gifted an interception opportunity to Bedford’s left winger Ryan Hutler who happily ran in from long range. His score also took his try tally to thirteen for the season.

Sadly, another intercept opportunity was soon gifted the home side, and it one taken by full-back Rich Lane. It was as if Easter eggs were being handed out early, with the supporter present, including a good contingent following the Pirates, not quite believing what they were seeing. Anyway, Hooley slotted the conversion and followed with a second penalty kick that made it 25-0 at the break.

Things haven’t been going the way of the Pirates in recent weeks and adding to their woes both hooker Dan Frost and prop Tyler Gendall had to be replaced at half-time because of injury.

Playing up the slope, a good start to the second forty saw controlled play from the Pirates duly rewarded when centre Javier Rojas Alvarez crossed to the right of the posts. Fly-half Will Cargill kicked the conversion and the Pirates were soon on the attack again, with hopes raised when wing Matt Evans ran well.

Further Pirates pressure led to Hutler deliberately knocking the ball forward when a score in the left corner looked a ‘cert’. The wingman was rightly yellow-carded, and the Pirates should have been awarded a penalty try. Mystifyingly, they weren’t.

This was a game when the Blues also made their fair share of errors, however nearing the end they made late scrum dominance count to earn a penalty try, before the Pirates hit back at the very last with a fine effort from replacement back-rower Dan Lee. His rampaging run ended with a try near the posts that was converted by replacement fly-half Harvey Skinner. It also meant that although deservedly beaten because of their poor first half performance, the Pirates had ultimately shown perseverance to the end and in the process had outscored their opponents by 14-7 points in the second period.

We got off to a poor start, leaving them a massive hole at the back to take advantage of. Then, gifting interceptions, that simply compounded our situation and it looked at times it as if we had never ever seen a rugby ball before.

At half-time we said a couple of early scores were needed, otherwise the game would evaporate in front of us. One early try was scored, and we created other opportunities but without being able to convert them.

Overall we are just not firing at present. It’s disappointing and we must all of us ask ourselves questions, including why with a game plan we go off script.

Bedford deserved their victory, however looking for positives we were at least physical and staying in the fight didn’t capitulate, which would have been bitterly disappointing.