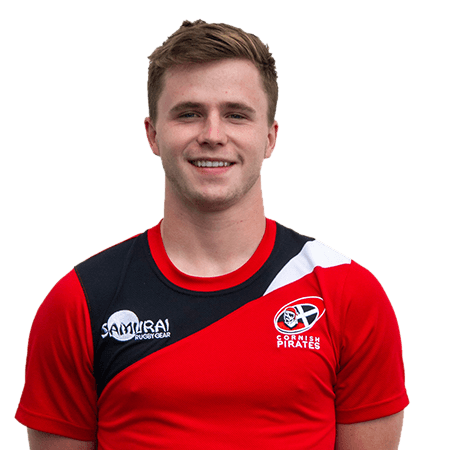 Under the cloud of mounting Coronavirus concerns, the Cornish Pirates recorded this excellent victory in what was Round 15 of the Greene King IPA Championship

The Bedfordshire side have been a surprise package in their first season playing at Championship level. Ahead of this game they had climbed to fourth in the league table, just one place behind the Cornish Pirates who had won 40-11 at home against them back in November, Now playing at Ampthill’s Dillingham Park ground, however, the Pirates naturally knew a much sterner test lay in store.

There were three changes in the Cornish Pirates starting line-up from the one that ran out at home to Nottingham last time out. Ruaridh Dawson was named at scrum half, whilst in the forwards there were returns for prop Jay Tyack and flanker Antonio Kiri Kiri.

In the opening exchanges, centre Shae Tucker was a busy performer for the Pirates to put them on the front foot, however when the home side countered they took play upfield from where full-back Tomi Lewis ran well to score, his try converted by skipper and fly-half Lewis Grimoldby, who shortly after also slotted a penalty.

For the Pirates, fly-half Will Cargill pulled three points back with a penalty landed in the seventeenth minute, whilst Dawson, making his first Championship appearance in team colours, was showing up well.

With the Pirates now settling into this contest, a carry from hooker Dan Frost firstly concentrated Ampthill defenders, and then, from another penalty award, Cargill stepped up to further reduce the deficit.

Grimoldby interrupted Pirates progress when kicking his second penalty, however the visitors were soon back on track when a fine passage of play saw home defenders stretched one way then the other. Backs and forwards combined, flanker Josh Caulfield drove within 10 metres of the line, and the advance continued with full-back Kyle Moyle delivering a scoring pass to centre Rory Parata. It had been a fine build up and score, though Cargill’s difficult conversion attempt drifted to the right of the posts.

A strong first half finish from the Pirates saw them go close once more, before the sound of the referee’s whistle brought the first forty to a close with the score reading 13-11.

Remembering their loss at the Mennaye Field, Ampthill’s head coach Paul Turner was hoping his side would make it a more competitive game at home, and thus far they had. It was also of no surprise, noting that the team was one blessed with able performers, including prop Soane Tonga’uiha, a former Tongan international with a wealth of Premiership and European rugby experience under his belt. Former Saracens and Exeter Chiefs scrum half, Kevin Barrett, was another who in the past has played at a high level, as was the case with hooker Michael van Vuuren, albeit him a little younger, who was on loan from Northampton Saints.

At the start of the second half it was anticipated that both sides would look to pick up the pace still further, in what had already been an entertaining game. Who would get the edge? Match again underway, we were about to find out.

Well, what a start it would prove, the home side kicking the half off and the Pirates quick to react when winning a turnover. Lock Fa’atiga Lemalu, Cargill, Parata, Tucker, No.8 James McRae and Moyle were then to the fore, with wing Robin Wedlake scoring what was a superb try. Cargill this time added the conversion.

The Pirates were soon on the attack again, penalty awards in their favour seeing them strive for benefit from a number of attacking lineouts. Ampthill defended well, but with the Pirates upping the pressure through the efforts of Moyle, Wedlake, prop Marlen Walker and flanker Kiri Kiri, it was Frost who scored an unconverted try.

As play entered the last quarter, with the Pirates leading 23-13 their supporters hoped they could keep their noses in front. Ampthill went close to scoring following a charged down kick, so for the travelling faithful there was natural relief when the ‘try’ was disallowed.

Withstanding applied pressure, when the Pirates were next able to set up an attack, it was Frost who went close to scoring once more. Awarded a penalty, the Pirates drove forward, and it was that man Frost who deservedly gained his further reward, to in the process deliver a bonus point providing fourth try. Cargill then added the last two points in the game – and perhaps the last for the Pirates this season.

This was a very fine win for the Pirates on their first ever visit to Dillingham Park, and it also one that consolidated their third position in the league, but what the future now holds for the game of rugby this season, in light of the previously mentioned Coronavirus situation, who knows?

Missing that flow of energy and a bit sluggish in the opening minutes, it seemed it took a big hit from Antonio (Kiri Kiri) to spark us into action and then settle into the game.

There is a bit of a walk to the changing rooms at the ground, so the players decided to stay out at half-time and do a bit of handling. Then, after receiving the kick-off when play resumed, we got off to a perfect start. It was a great team try, good handling under pressure and ending with Rory (Parata) squaring up and Kyle (Moyle) putting Robin (Wedlake) away for the score. Yes, we left a couple of tries out there, but credit overall to the lads – I am very happy.

We have been taking all precautions were glad to get the game underway. As for next week, we’ll see what it brings. Obviously, it would be an anti-climax if our season was over and a shame, however the game of rugby is small compared to a Pandemic and it is the health of everyone out there that is rightly a priority.