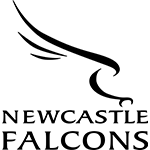 Playing unbeaten league leaders Newcastle Falcons away was likely always going to be a tough ask for the present third-placed Pirates, and so it proved, a fine first half performance from the home side cementing their victory.

At the end of a week that had brought a mix of astonishment, alarm and deep anger to clubs in the Greene King IPA Championship, following the news from the RFU that central funding is to be halved for the 2020/21 season, the Cornish Pirates had made the long trek north for this Round 13 match.

The starting XV selected by the Pirates showed just two changes in the line-up from the one that ran out against Doncaster Knights the previous weekend, with Jack Andrew and Craig Mitchell named as the propping pair.

The last time the teams faced each other was, of course, at the Mennaye Field in October, when at the end of a closely fought affair the Falcons returned home with an 18-9 points victory under their wings.

With the impact of ‘Storm Dennis’ creating record breaking day for floods about the country, in Newcastle conditions were thankfully bright and sunny, albeit still very windy.

The facets of the Falcons were quickly on show, as in the sixth minute territory was acquired from where the ball was released to wing Adam Radwan, whose try on the left was converted by fly-half Brett Connon.

So, how would the Pirates react to the early set-back? Well, unfortunately it was not long before they were stunned once again, initial good play from Newcastle’s full-back Tom Arscott providing a thrust from where colleagues took up the cause for prop Mike Daniels to score a converted try at the posts.

For the Falcons, Radwan in particular was thrilling the home crowd on Kingston Park’s firm plastic surface and after their team attacked once more, this time through centre Toby Flood, it was scrum-half Sonatane Takulua who was on hand to score an unconverted try in the corner.

19-0 up with less than 17 minutes on the clock was a dream start for the Newcastle side. The Pirates had been blasted away, however shortly after the restart a penalty award saw fly-half Javier Rojas Alvarez kick for the corner. Hopes were sparked for a score, and it was not long before one appeared to have been created. Centre Callum Patterson took a quick throw-in to flanker Josh Caulfield, with wing Alex O’Meara then seemingly scoring. Unfortunately, however, the TMO had other ideas, and the ‘try’ was disallowed.

As the half progressed, through pressure applied by the hosts the penalty count was mounting against the Pirates who just weren’t able – or allowed – to settle into the match.

A bonus point fourth try for the Falcons was simply inevitable, and it one not long delivered. Snaffling possession just inside their own half the ball was quickly worked to left wing Sinoti Sinoti whose score in the corner was well converted by Connon.

Just before half-time a break by Rojas Alvarez, with support from flanker Antonio Kiri Kiri, again sparked just a little hope, only for the advance to be halted and referee Mr. Leal to shortly after draw the half to a close. At 26-0 the thoroughly efficient Falcons were flying, whereas the Pirates had in all honesty suffered a bit of a battering.

For the start of the second forty, the Pirates introduced props Hayden King and Jay Tyack to proceedings. It was a time to seek control of possession, and to also look to bring their thus far redundant but gifted back three into play.

The opening period was certainly brighter for the visitors, hard work and adventure delivering an early penalty award. Travelling supporters were also making themselves heard, with hearty chants of ‘Pirates! Pirates!’

Following a kick to the corner the Pirates pressed hard, only to give a penalty away, and with it the opportunity for the Falcons to work their way back upfield. They did, with former Plymouth Albion man Arscott again well involved before flanker Callum Chick followed through Connon’s deft chip ahead to gather and score another converted try.

Cornish Pirates’ Director of Rugby Chris Stirling had said pre-match that the Falcons have one team that can roll along to get results, plus one that can step up further when needed. In this match it was definitely the latter.

As play entered the last quarter, there was credit due the Pirates when through such as full-back Kyle Moyle and centre Callum Patterson they defended magnificently on a couple of occasions. Introducing further fresh legs, they would also press hard for a score, with replacement hooker Dan Frost making a menacing run. Then, when width was created to the left, it was Rojas Alvarez who scored not only the first try for the Pirates but also their first in four match attempts against the Falcons. The league’s top points scorer also slotted the conversion.

The game was clearly Newcastle’s, however credit to the Pirates for their efforts late on, despite man-of-the-match Radwan’s registering his second five-pointer. Now the present top try-scorer in the Championship this season, his effort was this time converted by Flood.

Accepting that his side was well beaten, speaking after the game Chris Stirling commented:

We were well beaten today by a clinical Newcastle side who early on really put us to the sword. It took us awhile to get a hang of the breeze, which was incredibly tricky. Also, when put under pressure, we lost the ball in contact and fell of a couple of tackles and it hurt us.

In the second half, playing into the wind we put a lot right, performed a lot better and played a lot better. We should have scored a couple of more tries, however we also showed that we have depth in the squad, which was pleasing.