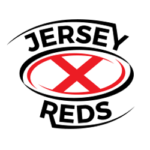 Taking to the air to play early league leaders Jersey Reds at a wet and windy Stade Santander International ground on Friday evening, the Cornish Pirates battled hard, but departed pointless, with four yellow cards inevitably not helping their cause

For the Pirates a stern test was expected, noting that the islanders had in their previous three matches won 36-21 at Ampthill, 40-14 at home to Coventry, and then 55-21 away to London Scottish.

Having notched a 20-6 points victory away to Jersey on their first ever visit back in September 2012, the only other such league win for the Cornish Pirates was in January 2020, when they came away with 23-10 victory. On their last two visits in the past couple of seasons they had narrowly lost 32-31 and 15-5.

The Cornish Pirates, without the availability for this match of players dual registered with Exeter Chiefs, made four changes in their starting XV from the one that ran out at home against Bedford Blues last time out. At full-back AJ Cant was making his first league start of the season, Ruaridh Dawson was selected at scrum-half, James Fender returned to partner Will Britton in the second row, and there was a prompt return from injury for number 8 Seb Nagle-Taylor. Named on the bench were lock Josh Williams and centre Garyn Smith, both keen to make their first league appearances for the club.

As the Cornish Pirates ran out to a familiar sound of ‘Sandstorm’ being blasted through the tannoy system, there was a feeling that this would be an occasion when, as per last year, weather conditions would surely dictate that a high-scoring game was out of the question. We would see.

After Nagle-Taylor carried strongly there was a hope that the Pirates could apply early pressure, however the home team held the danger and threatened themselves when a couple of penalties that came their way. Thankfully, the Pirates showed their mettle defensively, with play proving evenly contested in the first quarter.

The evening was also, not surprisingly, proving testing for both kickers and line-out operators, as suddenly the Pirates were called upon to defend once more. The Reds applied immense pressure and appeared likely to score from a series of driving mauls. A cross-field kick also looked to have created a scoring chance, only for Pirates’ winger Robin Wedlake to save the day.

Half an hour into the game it was still scoreless, but when the Pirates went down to 14 men after Nagle-Taylor was shown a yellow card it looked a little worrying. At scrum time they were driven back, and referee Mr. Walbaum not only proceeded to award the Reds a penalty try but also issued another yellow card, this time to prop Marlen Walker.

The Pirates had defended very well overall, but when Jersey were awarded a second penalty try on all but halftime, with scrum-half Ruaridh Dawson also now a third Pirate directed to the sin bin, the first forty ended with the hosts holding a comfortable 14-0 lead.

It was surely inevitable that the Pirates would have to sustain considerable pressure at the start of the second period, however to their credit the immediate response was admirable. Working their way into Jersey’s ‘22’, from a driving maul to which seemingly all backs added their weight, an unconverted try was scored by replacement prop Jack Andrew.

Playing the conditions well, the Pirates would soon score again. Hooker Will Crane ran well and with momentum maintained it was replacement Carwyn Penny who made it to the line. Adding the extras in the difficult wind once again proved the case for fly-half Arwel Robson, however travelling supporters were at least suddenly buoyed at what they were for the present witnessing.

The last quarter would surely prove enthralling, and exciting, as tension levels about the ground heightened and sweeping rain flickered in the floodlights.

As the Pirates strived to score their third try of the match, further fine play from Crane and Wedlake provided promise, and through pressure created home lock Macauley Cook was yellow carded.

In endeavouring to take advantage, the Pirates were denied by solid defensive play from Jersey. The efforts of hooker TJ Harris particularly stood out, and there was then a thumper of a tackle made by centre Alex McHenry.

The clock was ticking away, but with the scoreline reading 14-10 the Pirates were still in with a chance of sneaking an unlikely victory, especially considering they had suffered three yellow cards. Unfortunately, however, after kicking the ball dead when it was thumped up field, a sudden advantage was gifted the Reds who were immediately able to up the ante. Indeed, pushing the Pirates back a third match-winning penalty try was awarded, with the Pirates also losing Andrew to the sin bin.

This match was expected to be close, and it was. A losing bonus point was arguably the least the Pirates deserved, but on a night of wind, rain, and yellow cards, at the end of a hard-fought battle it was not to be.

“The guys approached this game with a great attitude and really applied themselves physically for the first thirty minutes.

“We were really putting it to them early on and were deservedly right in the game, however I also feel that early doors we were not able to perhaps get as much line-out ball as we would have hoped and then later in the back end of the first half the scrum was under a lot of pressure, and not able to hold it the yellow cards came.”

“The character shown in the second half got us back into the match but come the end of what was always going to be a tough contest it was ultimately not to be.”

Read Jersey Reds 21 Cornish Pirates 10 Match Report
The Cornish Pirates website uses cookies to give you the best user experience. If you continue to use this site we will assume that you are happy with it. Read moreACCEPT