Cornish Pirates / Remembrance at The Mennaye

Remembrance at The Mennaye

Remembrance at The Mennaye

It was 102 years ago today, at 11am in a train carriage at Compiègne in northern France, that the Germans surrendered and signed an Armistice to bring the war on the Western Front to an end.

‘Armistice’ is Latin for ‘to stand (still) arms’ and annually we mark Armistice Day around the United Kingdom with a two-minute silence at 11am on the 11th day of the 11th month.

Due to the Covid-19 pandemic, Remembrance services and events have inevitably been curtailed this year, however people have still been able to show their respect where practical.

About the Mennaye Field at Penzance this morning, certain representatives of the Cornish Pirates attended with volunteer personnel present, each keen to observe the two-minute silence. 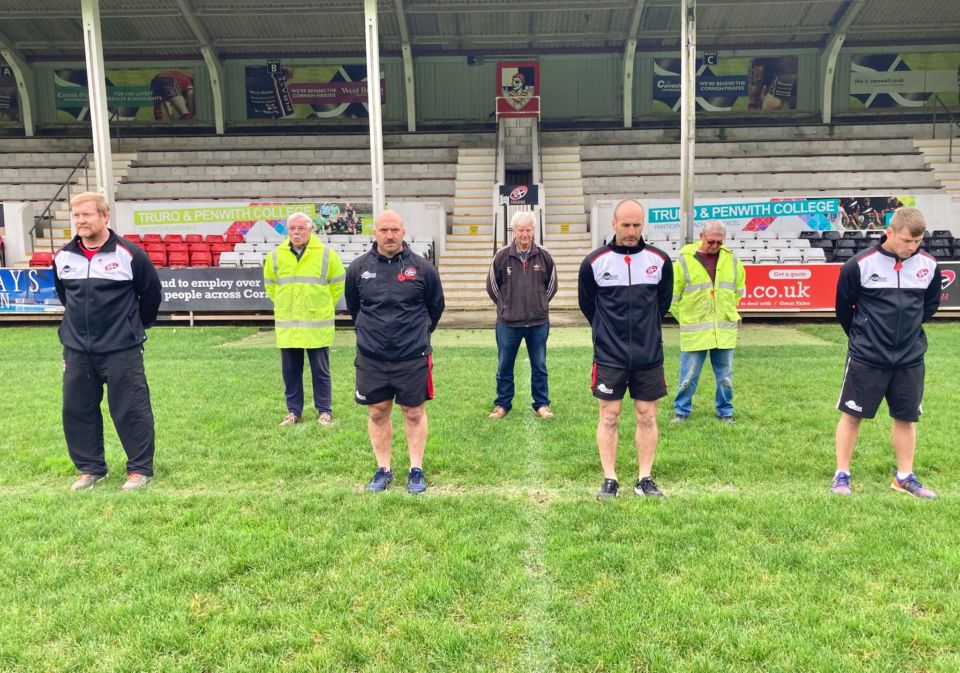 Responses Made by Sportsmen in Times of Conflict

At the start of WW1, Field Marshal Lord Roberts commented: “How very different is your action to that of the men who can still go on with their cricket and football, as if the very existence of the country were not at stake! This is not the time to play games, wholesome as they are in times of piping peace. We are engaged in a life and death struggle.”

When speaking these words on 29 August 1914, his message could not have been clearer: it was time for Britain’s sportsmen to stand up and be counted. Britain had declared war on Germany earlier that month and Lord Kitchener’s recruitment drive – “Your Country Needs YOU!” – was on its way to enrolling 500,000 men in its first four weeks. Lord Roberts was speaking at the formation of a new 1,600-strong battalion of Royal Fusiliers by businessman from the City of London. This so-called ‘Stockbrokers’ Battalion’ was the first of the ‘Pals’ Battalions’ promoted by General Sir Henry Rawlinson as a way to encourage groups of friends and work-mates to serve together.

The campaign to enlist sportsmen intensified in early September with the public intervention of a leading writer and commentator, Arthur Conan Doyle.
The Sherlock Holmes author, an amateur footballer and MCC cricketer in his younger days, declared: “If the cricketer had a straight eye let him look along the barrel of a rifle. If a footballer had strength of limb let them serve and march in the field of battle.”

Posters used in the British recruitment campaign informed would-be soldiers that a German newspaper, ‘Frankfurter Zeitung’, was telling its readers: “Young Britons prefer to exercise their long limbs on the football ground, rather than expose them to any sort of risk in the service of their country.”

By the end of September, more than 50 towns and cities had established one or more Pals’ Battalions, among them sportsmen’s battalions.

Concentrating on Rugby union, it prided itself as a sport that played its part. By the end of November 1914, every England international from the past year had signed up, while a 1915 war recruitment poster declared: “Rugby union footballers are doing their duty. Over 90 per cent have enlisted. British athletes! Will you follow this glorious example?”

There was an inevitable price to be paid. The England captain, Ronnie Poulton-Palmer (also Chairman of the Huntley & Palmer biscuit business in Reading), was killed by a sniper’s bullet at Ploegsteert Wood in 1915. A fellow officer reported that when he went around the company at dawn “almost every man was crying”. Ronnie was among 27 England internationals who died. Thirty Scottish international players lost their lives, and 11 Wales players.

Another England captain, Edgar Mobbs was denied a commission due to his age in September 1914, so he set about raising his own company and in 48 hours more than 400 men had volunteered – with Mobbs himself a private. He rose through the ranks to command the 7th Northampton Regiment (known as ‘The Mobbs Own’). Wounded three times during the War he was twice mentioned in dispatches and received the DSO in 1917. He was killed that year leading a charge on the first day of the Battle of Passchendaele.

It is understood that during the War all local football ceased, but several rugby matches were played locally by Air Force men stationed in Newlyn – at the Seaplane Base near Penlee Quarry.

An interesting but sad event that took place just after the War broke out concerned the Newlyn club which owed the ‘Exiles’ RFC a fixture which the Exiles were anxious to have fulfilled. The Newlyn Secretary had only two players left at home, for the rest of his men had either been called up for the RNR or had volunteered for service. At that time the Northants and West Yorks Regiments were in training at Penzance and, through Mr. Steven Bond, he got in touch with the Commanding Officers, asking if some of their men would play the Exiles. In short time he was besieged by soldiers wanting a game and got his XV together and went to Porthcurno which at that time was fortified, the station being surrounded by sandbags and barbed wire. Arriving there, these soldiers donned the Newlyn jersey and played for the Cornish club. Shortly afterwards they went across to France, and every man taken to Porthcurno gave his life for his country.

During the War, Newlyn lost several fine players including R. Green, RNR, who was drowned in the Dardanelles; A. Reseigh, one of the first players, drowned in the Mediterranean; W. Pearce, MC, who, killed in France with the South Africans, had been a well-known player on the Rand; R. Harvey, a splendid bustling forward, blown up off Harwich; Nicholls, a young player, lost his life in Mesopotamia. Several others were badly wounded. W. J. Hosking was wounded in five places, but he came back and played again.

In WW2 the Rugby Football Union (RFU) temporarily lifted its ban on rugby league players, many of whom played in the eight ‘internationals’ between England and Scotland that were played by Armed Services teams under the rugby union code. The authorities also allowed the playing of two ‘Rugby League v Rugby Union’ fixtures as fund-raisers for the war effort. The rugby league team (which included some pre-war professionals) won both matches, which were held under union rules.

The last fixture in the 1939 Home Nations Championship was the Calcutta Cup match played in March 1939, when England won 9-6 away to Scotland. Six players who took part in the game would lose their lives during the war, while seven would return to international rugby afterwards.

Of general interest, during WWII England’s Twickenham rugby ground was used as a Civil Defence Depot, the East Car Park was dug up for allotments, and the West Car Park was a coal dump.

In total, 14 England internationals died during the war, including winger Prince Alexander Obolensky, who had fled to Britain during the Bolshevik revolution of 1917. He made his debut for England in 1936, when England beat New Zealand for the first time, 13-0. The Prince scored two tries, his first a 70 yards mazy run to the line which is regarded as one England’s finest. He was unfortunately killed in 1940 during RAF training, when his Hawker Hurricane overshot the runway at Martlesham Heath Airfield in Suffolk and dropped into a ravine.

A famous Olympian, Eric Liddell, who was also a wing threequarter, represented Scotland in seven matches. Immortalised in the 1981 film ‘Chariots of Fire’, he returned to China, the country of his birth, to work as a missionary but was captured by the Japanese when they invaded China. Eric died in the Weixien Camp five months before it was liberated and he was one of 15 Scotland internationals who lost their lives in the war. Wales lost 3, and both Ireland and France lost 8 each.

There were many Cornish rugby players who served in WW2, and a number inevitably lost their lives. One locally known such person who served and survived was Captain John Vivian David ‘Tinker’ Taylor who won the MC while serving with the Irish Guards in Normandy during August 1944. ‘Tinker’ played for and captained the Pirates and was associated with Taylors Garage in Penzance. Of interest the building suffered major fire damage in 1944 when American soldiers were billeted in the top floor. Thankfully they escaped the fire and helped rescue vehicles.

There have inevitably been sad losses in more recent times, and the Pirates remember in particular Darren Hicks. A product of our Youth Section, who later played for the Pirates Amateurs, Darren was killed by an explosion in Helmand Province, Afghanistan, in February 2010. Many will remember that a fitting tribute followed in June that year when a Pirates Amateurs selection played the Coldstream Guards on the Mennaye Field. Darren loved his job, his rugby, and his family especially meant more to him than anything else in the world, and the presence of 1500 people confirmed the huge level of respect felt by individuals towards him. There was also a heartfelt welcome given to the family of Sergeant Paul Fox from St. Ives, who was also killed in Helmand

‘Land of Hope and Glory’ was played over the tannoy system as the teams ran out from the tunnel and lined up to face a packed main grandstand. At the right moment, as PA announcer, I then asked everyone present to stand, before expressing the following words: “Ladies, gentlemen and children, we are gathered here this evening to honour the courage shown by the men and women in our services. We are humbled by their efforts, and sacrifices made should never be forgotten. Remembering Darren especially, and also Paul, we pay our immense respect to all of our service personnel.” An emotional minute’s applause then followed, starting and ending on the sound of referee David May’s whistle.

To conclude, space does not permit to elaborate further, as to list everyone rugby associated would be impossible. However, we can all pause for a moment to pay tribute to sacrifices made and to realise how much sport lost through all those who laid down their lives. We will remember them. 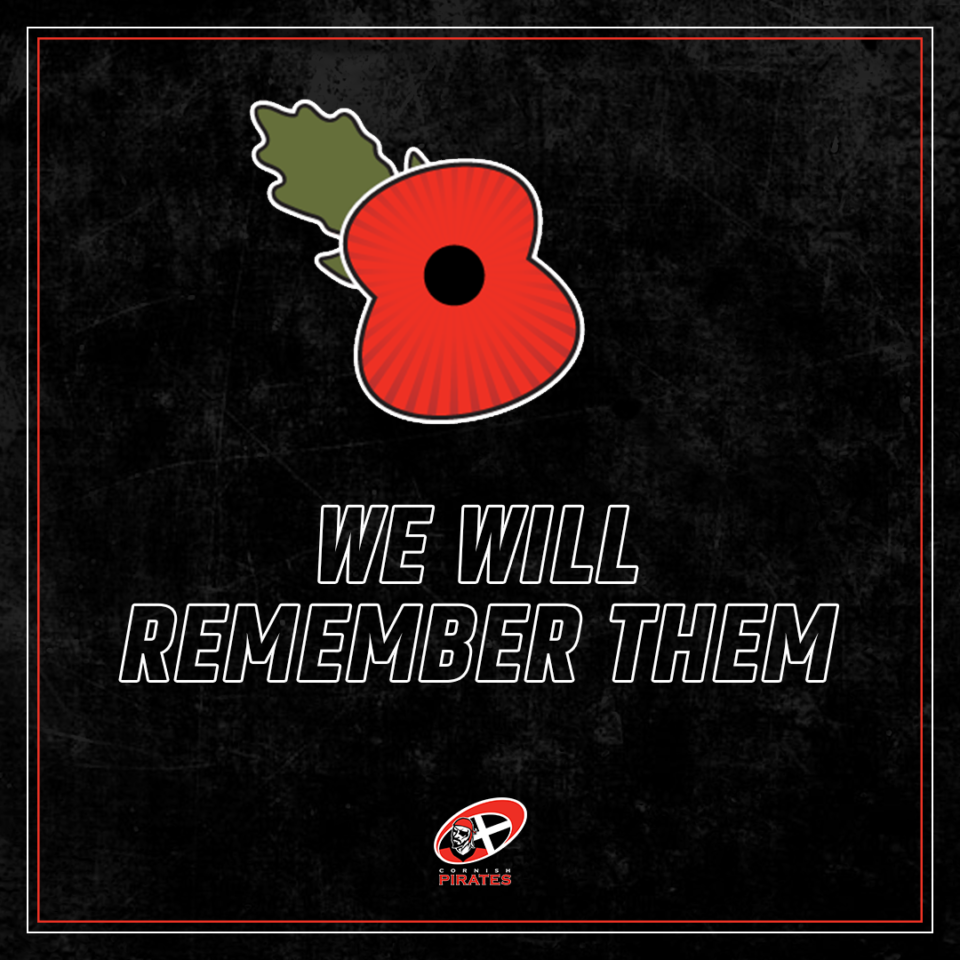