Over the years I have compiled numerous rugby related articles, many taking a nostalgic look back to events past.

Such pages have often glanced back to a definitive time, highlighting points of interest as to what was happening a given number of years ago, on perhaps a particular day or week – or whatever. There really is so much that can be highlighted, the list all but endless.

This editorial provides an example, which is relation to a visit made to our shores by the 1972/73 New Zealand rugby team – the famous ‘All Blacks’ – who were skippered by the respected Ian Kirkpatrick. Yes, his side lost four games, however the team maintained their honour by importantly returning home without being defeated by the home countries. They won 19-16 against Wales, 14-9 against Scotland, 9-0 against England, and drew 10-all against Ireland. The overall record of their UK and Ireland tour ended: P 26, W 20, L 4, D 2, Points 521-227.

The All Blacks’ defeats naturally provided memorable occasions for their victors, starting with an emotionally charged 9-3 win for Llanelli against the tourists in a match played in front of 22,000 supporters at the bubbling cauldron that was Stradey Park. A try from centre Roy Bergiers gave the Scarlets an early lead and from then a battle ensued. The crowd besieged their heroes on the final blow of referee Mike Titcombe’s whistle, and the sound of ‘Sospan Fach’ filled the air as never heard before.

In November, at a ground in the unlikely rugby league town of Workington, the North West Counties, coached by John Burgess, triumphed 16-14 against the New Zealanders. It was indeed an historic victory, as at the 80th attempt, and over a period of 67 years, this was the first time an English provincial side had beaten the All Blacks.

New Zealand’s third defeat was against Midland Counties West, who early in December won 16-8 at Moseley’s ‘The Reddings’ ground, and the fourth loss was at the end of the tour when at Cardiff Arms Park they were beaten 23-11 by the Barbarians.

Concentrating a little more on the ‘Baa-Baas’ match, which was truly a classic affair, in a game of many highlights the outstanding moment was when mercurial Welsh fly-half Phil Bennett – one of Llanelli’s heroes earlier in the tour – completely flat-footed the dumb-founded Kiwi opposition to start a quite remarkable move. It covered the length of the ‘Arms Park’ and ended in ‘that try’ – the one, of course, so often often recalled, which was finished off by Wales’s legendary scrum-half, the great Gareth Edwards.

NOW, a major event to recall, the circumstances of which would lead to local interest, concerned the occasion which led to the early departure from the tour of prop Keith Murdoch, who was said to have ‘floored’ a security guard after the Wales versus New Zealand match in December. This was a most unfortunate and still mysterious incident, which understandably cast a gloom on the tour for a period. Keith Murdoch – he of the ‘Zapata’ moustache – had scored the winning try against Wales, but such was his shame at being sent home that he avoided returning to New Zealand (note further information in the final paragraph).

And the local interest? Well, Keith Murdoch’s replacement would be 30-year-old Lindsay Clark, who arrived in Penzance from Dunedin just ahead of the All Blacks fixture against Cornwall & Devon. Scheduled for Tuesday the 2nd January 1973, the New Zealand squad flew into St. Mawgan late on New Year’s Eve morning and stayed for three nights at the Queen’s Hotel, Penzance.

Back in those days, on New Year’s Eve the first port of call for many of us Pirates was the Navy Inn, which was an immensely popular rugby hostelry and drinking hole at the time. On this occasion, however, it was all but taken over by the Kiwi visitors, thus quietly demanding that us locals present be at our politest. Hey, nobody wanted to upset the likes of Canterbury’s Alex ‘Grizz’ Wyllie, as the natural expression on his face was intimidatory anyway!

Being surrounded by such admired rugby personnel certainly made for a memorable start to the evening, and one when one of our former players, Roger’ Dickie’ Maddern, took the opportunity (he was probably not alone) to acquire autographs of the All Blacks players. Indeed, on an image displayed I can recognise the signatures of prop Kent Lambert, flanker Alistair Scown, wing George Skudder, lock Ian Eliason, hooker Tane Norton, scrum-half Lyn Colling, lock Peter Whiting, No8/flanker Alex Wyllie, and centre Bruce Roberston. Also, later that evening, other such of their world-famous rugby stars, including Bryan Williams and Grant Batty, enjoyed the hospitality on offer at our Pirates ‘Westholme’ clubhouse.

The tourists trained at the Mennaye Field on New Year’s Day – it a bit special to see the likes of scrum-half Sid Going – and they later attended a ‘Sherry Party’ held at Trengwainton (courtesy of Major and Mrs. S.E. Bolitho), and were also in the evening guests at the Savoy Cinema.

As for the game at Redruth against Cornwall & Devon, that the All Blacks won by 30-7 was perhaps no surprise, their tries scored by Grant Batty (3), Ian Hurst (2), Bob Burgess and skipper Ian Kirkpatrick, with the unlikely figure of prop Kent Lambert landing a conversion. For the combined counties team England winger Kenny Plummer (Bristol, Penryn and Cornwall) scored a try, and scrum-half Alan Pearn (Bristol and Devon) kicked a penalty goal.

Peter Hendy (St. Ives and Cornwall) played on the flank that day, him a 21-year-old who had already played 21 times for Cornwall. Later that year he toured with John Pullin’s England team to Fiji and New Zealand. John Baxter, father of present Exeter Chiefs Director of Rugby, Rob Baxter, was in the second row, whilst playing alongside him was fellow clubman and future England international John Scott, who was quite remarkably just 18 at the time.

The sole Pirates representative in the combined counties team was to have been Brian ‘Stack’ Stevens, however also selected for England who played New Zealand at Twickenham four days later, he obviously had to withdraw from the fixture at Redruth. His place was taken by Hayle’s David ‘Farmer’ Hosking.

England, by the way, lost 9-0, but ‘Stack’ would later in the year more than make up for that, as on the 15th September 1973, he was a try-scorer for England in their historic16-10 win recorded against the All Blacks at Eden Park, Auckland.

Finally, what happened to Mr. Murdoch? It seems that having chosen not to face the wrath of the New Zealand sporting public, he hopped off his flight in Singapore, caught a plane to Darwin in Australia’s Northern Territory and virtually went walkabout for the rest of his life. Considered by many as one of rugby’s tragic figures, he died in 2018 at the age of 74.

Images displayed are as follows:

Programme Cover – for the Cornwall & Devon versus New Zealand match.

Keith Murdoch – he of the Zapata moustache.

Barbarians versus New Zealand Action – Barbarians’ Tommy David is checked by Graham Whiting but gets his pass out in the move that led to Gareth Edwards’ great try. 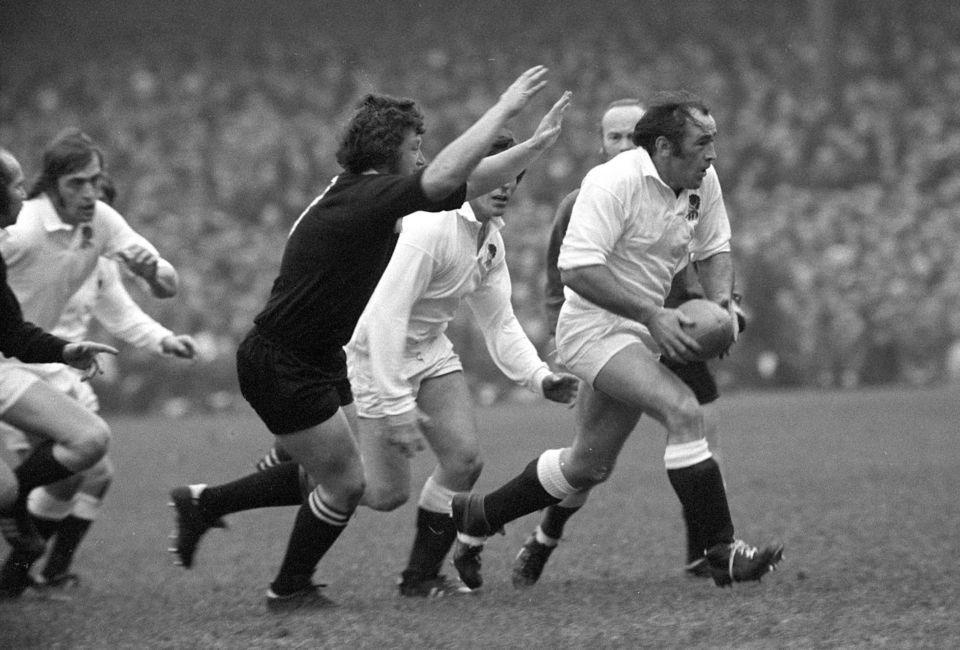 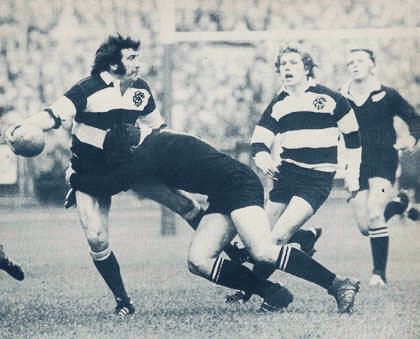 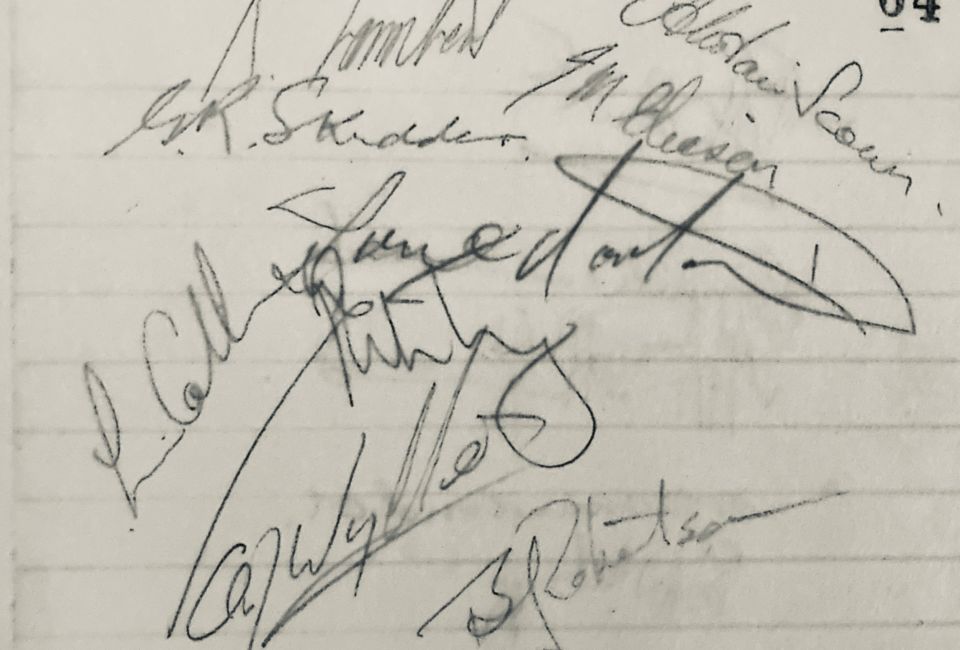 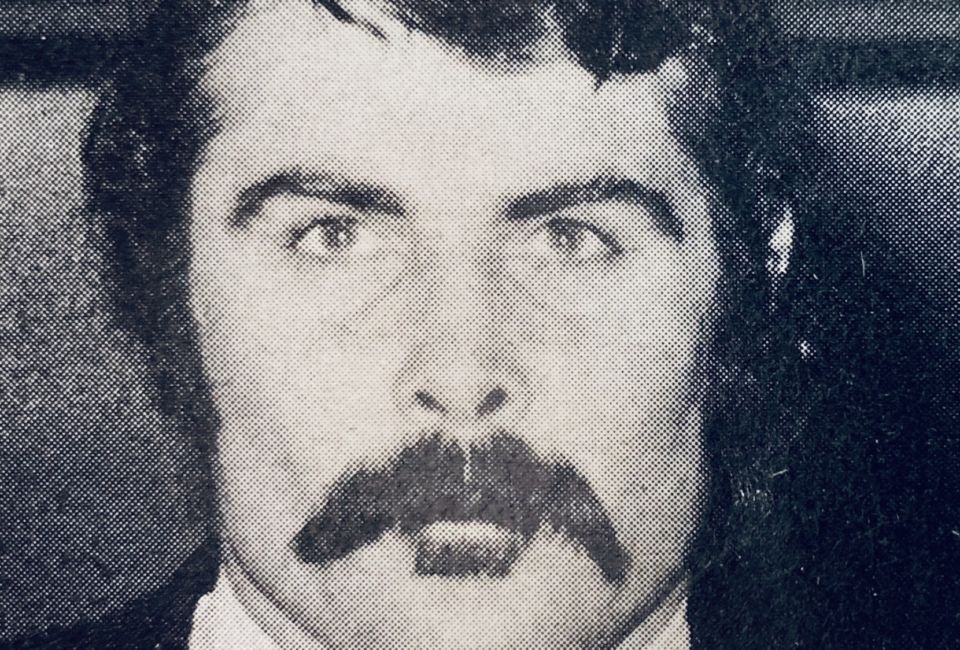 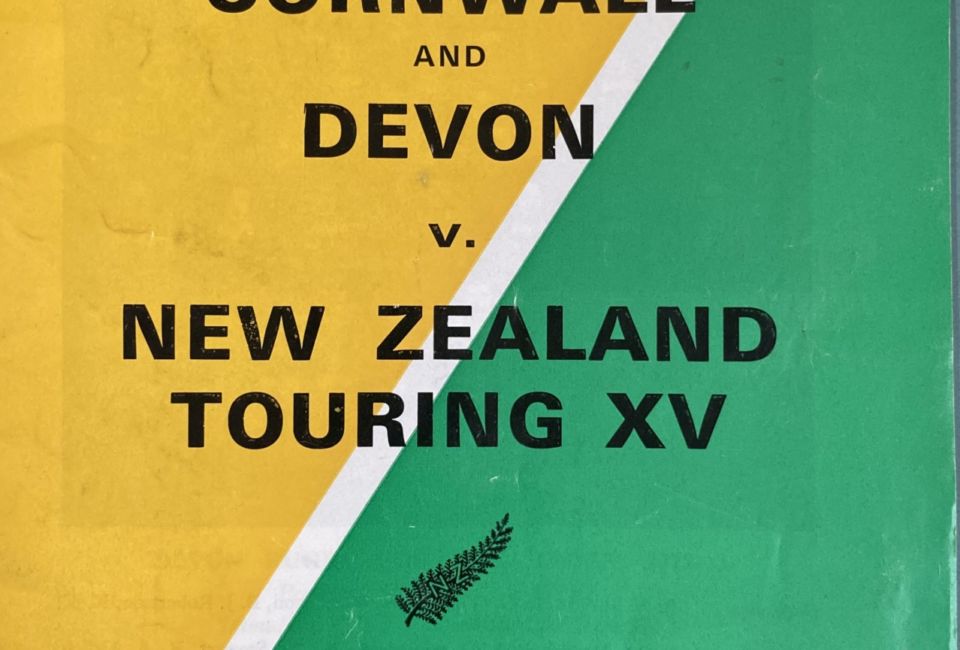