The 6th June this year marks the 75th anniversary of the D-Day Landings – one of the most remarkable Allied wartime operations.
The Royal British Legion (RBL) is working with the UK Government and other stakeholders to plan significant commemorations to mark D-Day 75, both in Normandy and across the United Kingdom.

The RBL is excited to announce that in partnership with Arena Travel, the ship mv ‘Boudicca’ has been chartered a ship to provide a fully funded tour for 300 D-Day Veterans. Each veteran is able to bring one carer who will also be fully funded.
Priority will be given to veterans who participated in the D-Day Landings, with the remaining spaces allocated to Normandy Veterans via a ballot.

To apply for a place on the mv ‘Boudicca’, please download and print the three identified forms via the following link:

The forms include an eligibility form that must be returned to Arena Travel by Monday 4 February 2019.

The itinerary covers departing Dover on the 2nd June and returning on the 9th June.

With reference to the D-Day landings of June 1944, the following editorial, released in June 2015, makes an interesting read:

General Ike – So Now We Know

The unveiling of a slate plaque at the entrance to the Mennaye Field rugby ground on Friday commemorated a little known but historic occasion 71 years ago, to the day, when General Dwight D. Eisenhower made a visit to inspect US Troops stationed in Penzance.

Attending to unveil the plaque was Colonel Toby Bridge of 1 Artillery Brigade, Tidworth, who was accompanied by the Penzance Town Mayor Mr. David Nebesnuick, plus representatives from the Town Council, the Royal British Legion, and Penzance & Newlyn RFC who afterwards hosted the gathering in the clubhouse. Brigadier Gage Williams was another honoured guest, along with Eric Lomax from Penzance who had landed in France on D-Day.

The wording on the plaque reads ‘General Dwight D. Eisenhower, Supreme Commander of the Allied Forces in Europe inspected the troops of the U.S. 35th Infantry Division on this Mennaye Field on 26 June 1944’.

Among other people present on Friday were three former Pirates, namely David Mann (who initiated the project), Major Peter Michell and Graham Paul. Both young boys at the time, Peter and Graham can recall the visit (see below), made by the Allied Supreme Commander General Eisenhower, who was accompanied by another famous American, General George Patton.

Cheered by nearly 2,000 local residents, including too Nobby Clark, one of the RBL representatives present on Friday, it was reported in ‘The Cornishman’ at the time that General Eisenhower looked fit and well as he waved to the people, smiling and appearing confident. He took his place on the bank at the Mennaye Field from which he was to take the salute and before leaving he drew the troops around him to speak to them. Also present that day was the Mayor of Penzance, Robert Thomas, plus a number of prominent townsmen.

General Eisenhower was aware of the high state of training which the Regiment had achieved and he expressed his confidence in the ability of the 134th Infantry Regiment, which formed part of the 35th Infantry Division during WW2, to do whatever job might be assigned to it. He said that he looked forward to the future with a promise of a “party on the Rhine.”

Orders would soon arrive that the troops would be moved across the channel, and as part of the back up to the initial D-Day landings on the 6th June they landed at Omaha Beach on the 5th July. Many towns were liberated, but there were also inevitably many casualties. The Regiment would eventually return home to the United States on the “Queen Mary” after the war’s end on the 5th September, 1945.

During their time in Cornwall – described as the Riviera or the California of Britain – troops had been billeted in houses, small hotels, and other buildings set aside for the purpose in the west of the county, and they made numerous friends as they had done wherever they had been.

The 1st Battalion was stationed in Penzance, the 2nd in St. Ives, Company H in Hayle. There were other bases for various units at Camborne, Clowance Estate, Land’s End, Lizard Point, Marazion, Porthleven, Praa Sands, and Redruth.

It is possible to view film footage of the American troops marching up through Market Jew Street, Penzance (on approx. 17 minutes 50 seconds), and then into the Mennaye Field on the 26th June, 1944, please link to [www.youtube.com]

Some personal recollections and information:-

Peter Michell – Peter was aged 11 at the time of General Eisenhower’s visit, and he clearly recalls ‘Ike’ inspecting the American troops on that sunny day at the Mennaye Field. The troops were apparently on the right side of the ground. Pupils from the School of St. Clare, now Bolitho School, also stood along Greenbank at the top of Alexandra Road and waved to the General as he passed in an open top vehicle. Then living on the outskirts of Heamoor, Peter also clearly remembers the troops regularly passing his house to train on Madron Carn.

Graham Paul – Aged 10, Graham walked from his home in Daniel Place to the promenade, which was filled the whole length by American troops. His first thought was ‘hey, something’s going on here!’, and this group was led by a band who would march their way to the Mennaye. Graham tagged along and there was a platform erected for where the salute would be taken. Over the years it became just rumour that the General’s visit took place, so Graham is pleased that the plaque now in place records the event. He also felt that Friday’s was a good turn out for a first-class commemorative occasion.

Eric Lomax – A retired Chartered Accountant, Eric was 19 when his company landed in France on D-Day. A Lancastrian who came to Marazion to live two years before the war, and who was in the same class at the Grammar School as Desmond James, Victor Trevail and John Laity, Eric recalls that the fighting on D-Day was fierce and a lot of men were lost, but by 8pm they had relieved Arromanches.

Unfortunately for Eric, however, at 6am on the 31st July he was hit by enemy machine gun fire, but there was also a fascinating element of luck. His life was saved by a glasses case pocketed in his left breast pocket, however the bullet still went to within half an inch of his heart and he still spent a year in hospital in England, to where he was quickly transferred on the 2nd August, 1944. On returning home to Marazion Eric, who has now lived for a number of years in Kings Road, Penzance, hoped to go to university, but there was a two year waiting list. Chartered Accountancy beckoned and he would also become Treasurer of both Penzance and Marazion Sailings Clubs.

As mentioned by Graham Paul, Friday’s event provided a first-class commemorative occasion and it also reminds us all that an immense debt of gratitude is owed to everyone who played their part not just on D-Day but also in the weeks that followed as part of the Normandy landings. 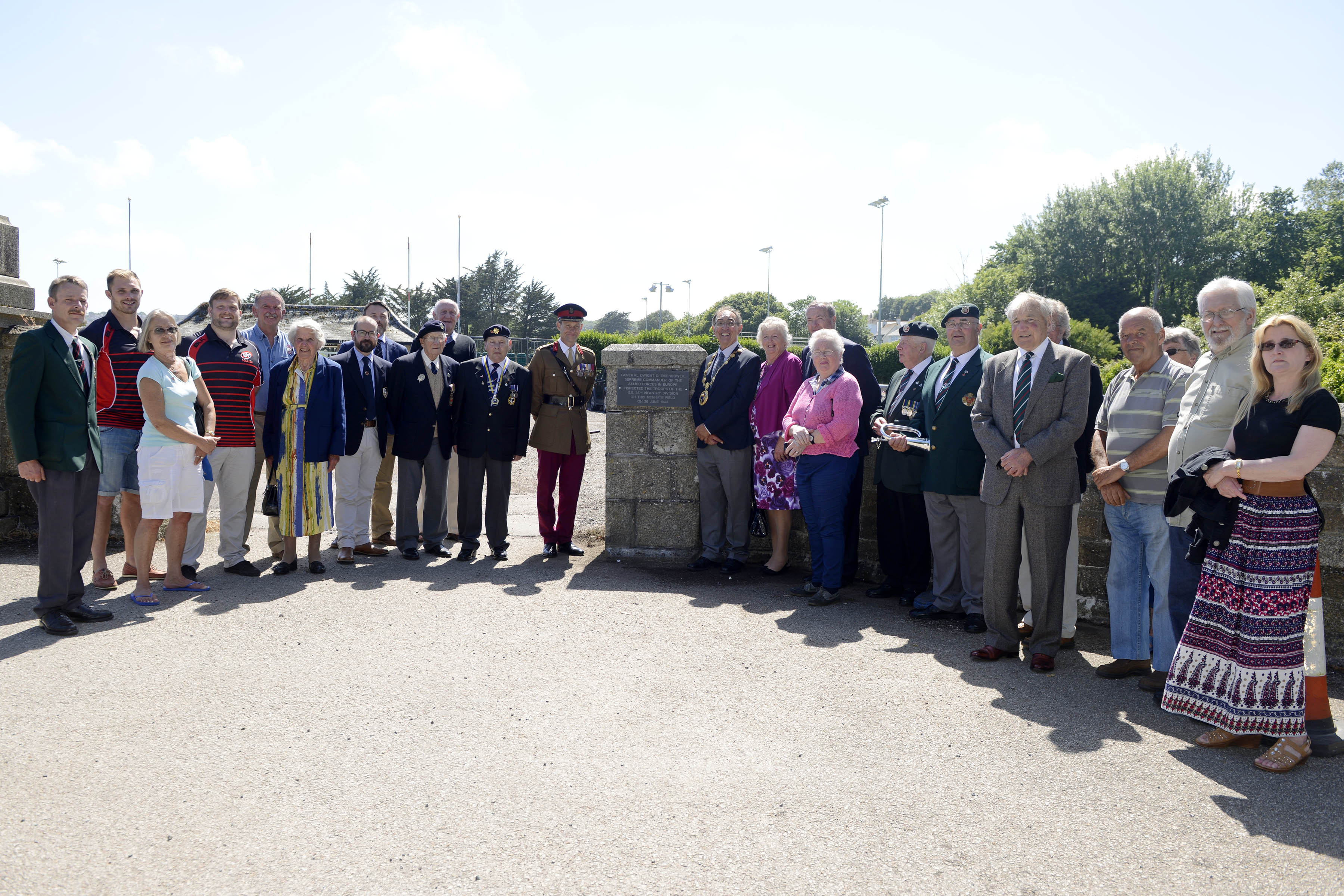