As we end a month of Remembrance, the following provides real interest. At the end also note the link reference a trip made to France in 2018 by members of Camborne Youth Band. Read on….

During World War One (WWI), on ‘neutral’ ground in France, three unique and ultimately poignant rugby matches were played between Cornwall and Devon. 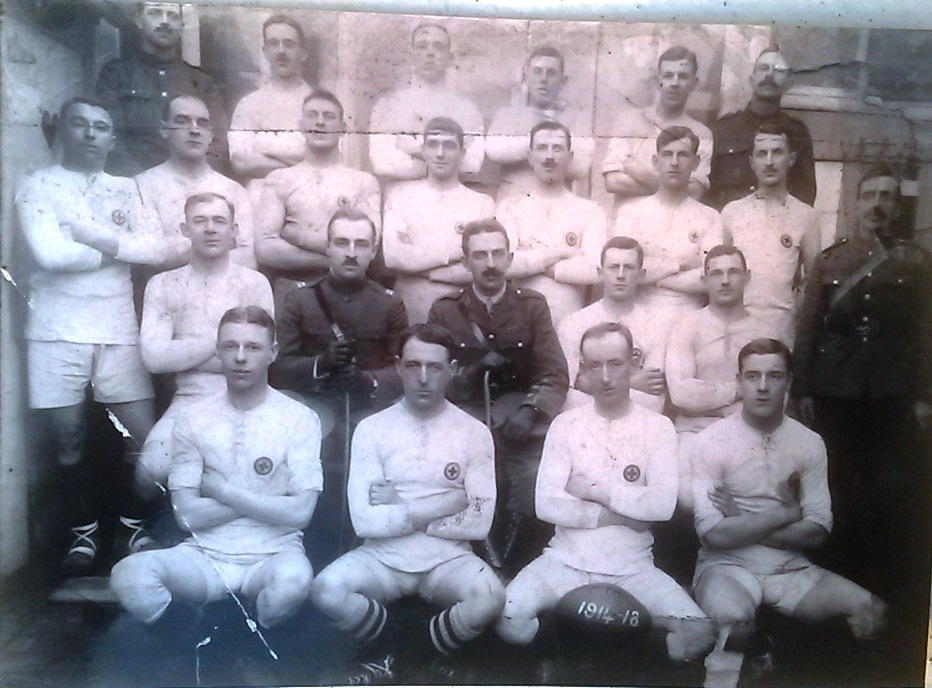 The matches, contested at the Front in May 1915, came about after miners from the Camborne-Redruth area had joined the 25th Field Ambulance and were based near Estaires in Northern France. Camborne RFC responded to a request to send out a rugby ball and Cornwall won two of the games to Devon’s one.

In 2018, when 100 years since the end of WWI was commemorated, Camborne Youth Band travelled to Estaires on the Western Front, following in the footsteps of the miners. A young band member, Corey Williams, a great-great-grandson of Fred Negus who featured in the Cornwall team, played the 100-year-old bugle that Fred brought back from the war. Camborne Rugby Club, which helped with costs, also presented a rugby ball signed by the 2018 Cornwall and Devon teams, which the band presented in turn to the town of Estaires. 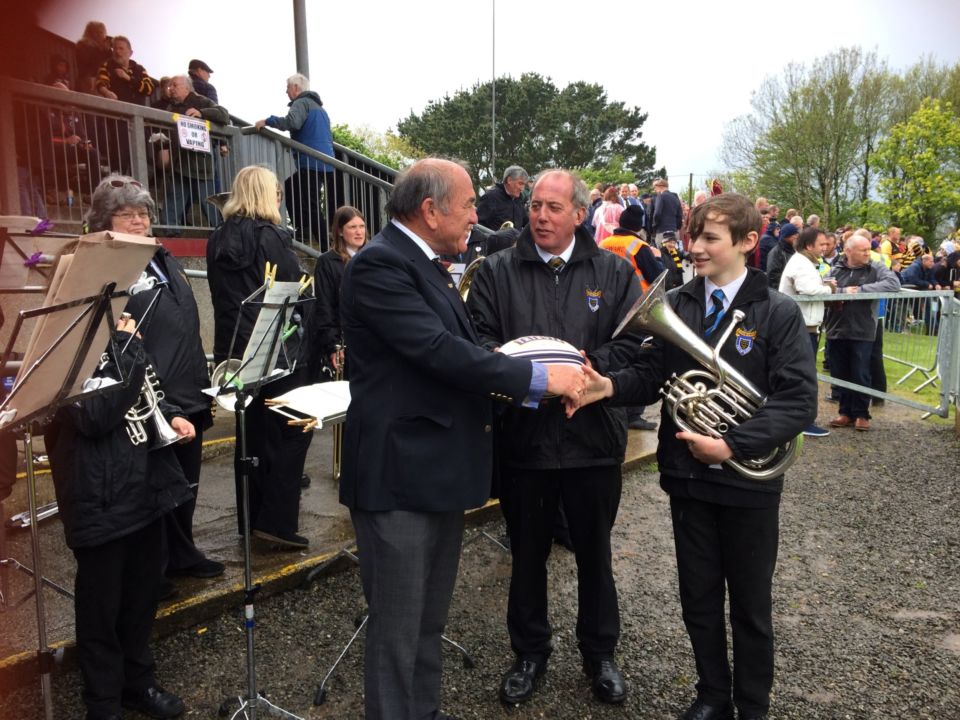 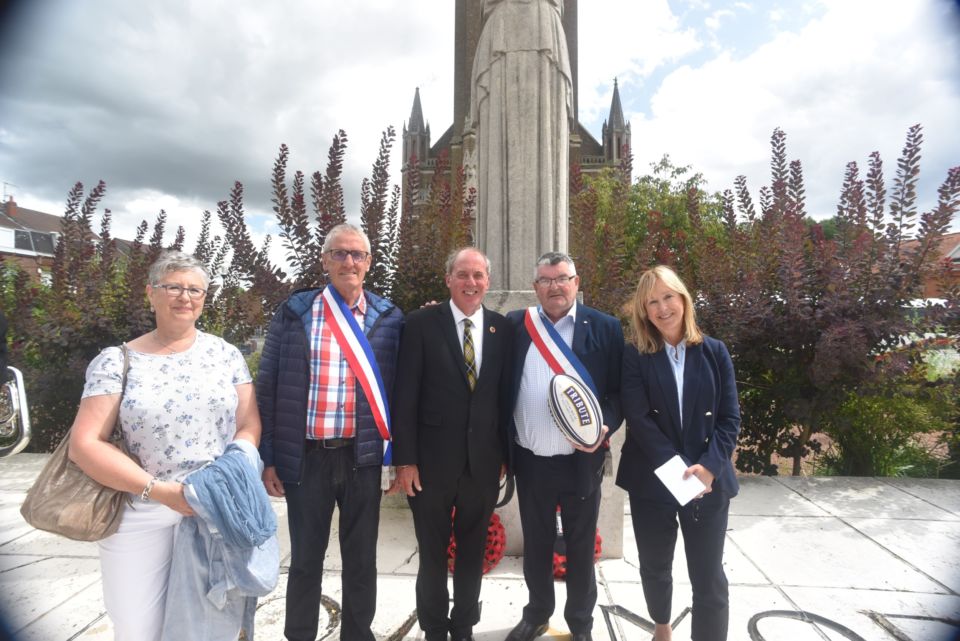 Camborne Youth Band’s trip to France was part of a project marking the centenary of WWI in Cornwall funded by the Heritage Lottery Fund and run by the charity Bridging Arts which worked with local people to uncover many family stories – and the previously unknown history of the rugby matches and the experience of the 25th Field Ambulance.

The photograph below is of Camborne Youth Band playing the ‘Last Post’ in the graveyard at Sailly-sur-la-Lys. It is where Newquay policeman Thomas Penhorwood, who was one of the best Cornish forwards, is buried. He was killed in the Battle of Aubers Ridge between the second and third rugby matches. 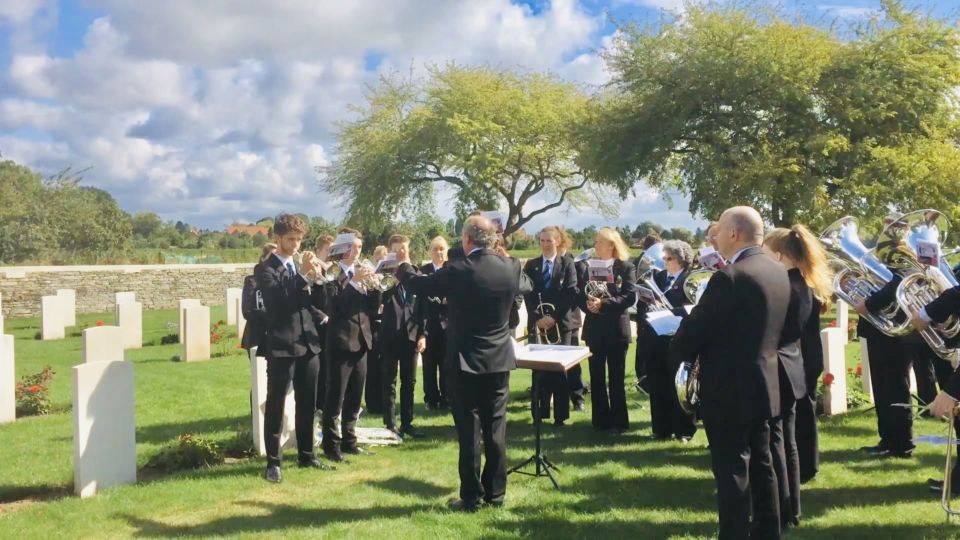 As for this next image, it is of Camborne Youth Band pictured at the Menin Gate, where 55,000 men who have no known grave are remembered. Conductor Alan Pope holds the previously mentioned 100-year-old bugle and the Band played at the nightly ceremony when the Last Post is played, and wreaths are laid. 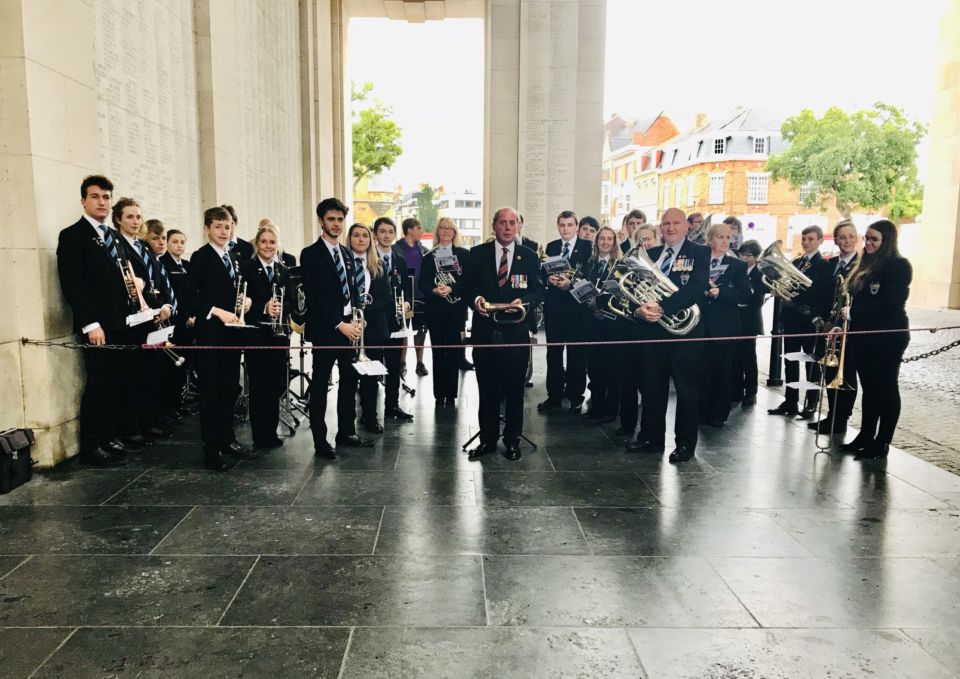 At the Menin Gate

To underline general importance, as recently as the 6th December last year, on a cold and wet but splendid afternoon, young students from the College du Sacre Couers in Estaires also commemorated the three historic rugby matches played on the Western Front 104 years earlier.

The school has strong links with this history because it was turned into a hospital during WWI and the 25th Field Ambulance was based there. Students participated in a rugby match and the rugby ball, on this occasion, was one that had previously been signed by the Cornish Pirates and was obtained by Bridging Arts and donated for this purpose so the game could take place. It was a great occasion and a credit to the school which showed such a deep commitment to local and international history.

Alison Pooley, granddaughter of Leslie Pentecost who played in one of the matches, also made the long journey from Camborne to the north of France to see the match. Having corresponded with the students in preparation for the day, which also included an exhibition, she said it was fantastic and a truly historic event. 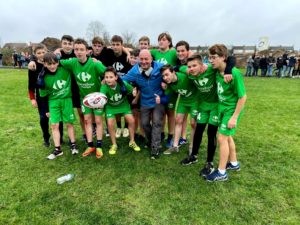 The match was played with a ball signed by the Cornish Pirates.

There is another Pirates associated link that relates directly to the Cornwall side that played back in WWI. Pictured below is John Head whose grandfather Fred Head was a team member.

John was a very able and popular Clubhouse Administrator for Penzance & Newlyn RFC (1983-86), whilst many will also know his brother Derek, from Camborne, who is a respected former Cornish rugby referee and keen cricket follower.

John and Derek’s grandfather is sat extreme right in the displayed WWI team photograph. Derek was not aware he played rugby, or in that match, although in the late 1940s his grandfather was President of Camborne RFC’s Supporters Club. 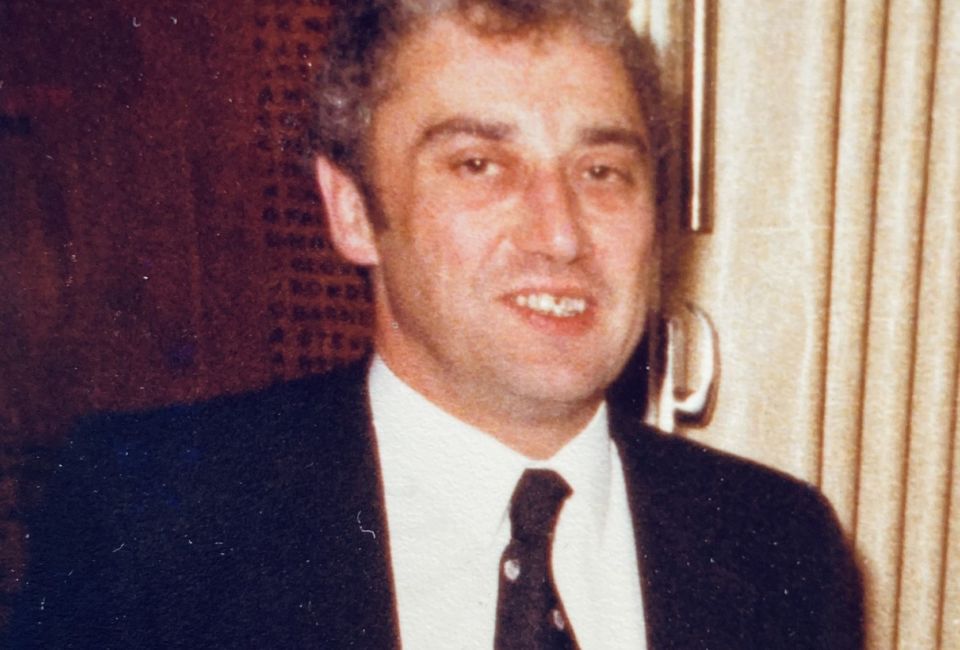 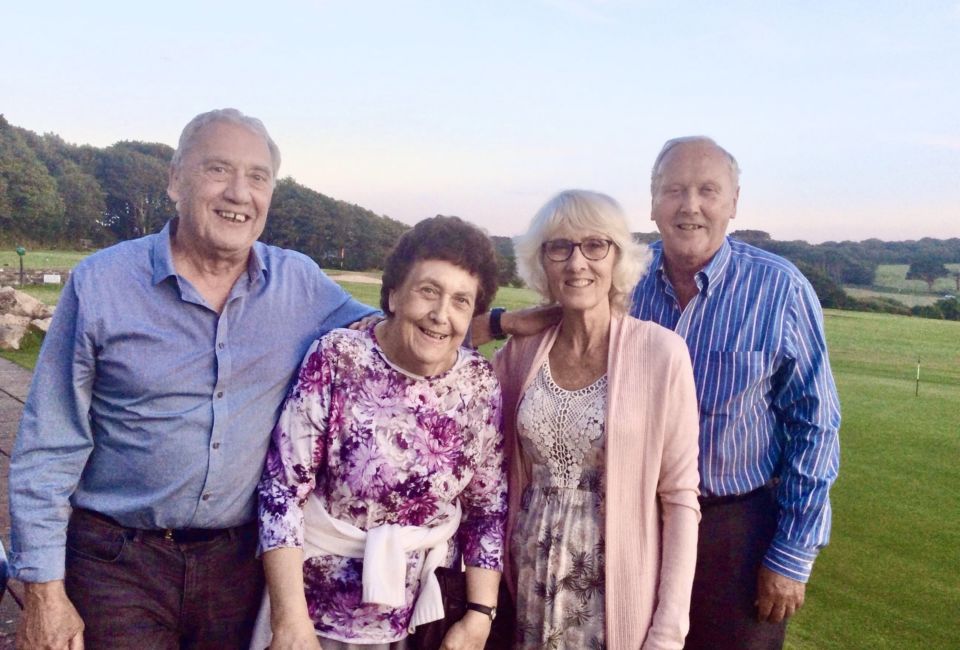 More About the Miners who Served in the 25th Field Ambulance

The 25th Field Ambulance was part of the Royal Army Medical Corps (RAMC). Those who enlisted underwent basic training, including using firearms, but they did not carry a weapon during the course of their duties.

After setting up camp in Estaires, 12miles south of Ypres, in November 2014, within a matter of a few days their hospital and dressing station received nearly 300 cases of frostbite. The ‘Cornishman’ newspaper that month mentioned ‘Camborne men in camp’ who were part of a contingent based at Winchester before deployment. It only gave the names of the men from Camborne, but the regiment, which was to become the 25th Field Ambulance, attached to the 8th Division, British Expeditionary Force, was made up of men from all over Cornwall and some from Devon.

They remained at Estaires until March 1915 but were to return again as the war yoyo-ed back and forth along the Western Front.

Being in the Medical Corps was not a ‘safe option’. Nearly 5,500 men (5%) were killed in action, and many more were very seriously wounded. Although they were not armed, or ever fired a weapon, stretcher bearers were every bit as brave as the soldiers. Thousands of members of the RAMC won medals for gallantry. Men of the 25th died trying to save the men of the 8th Division, to whom they were attached throughout the war. However, because of their non-combatant status, they were not entitled to the ‘one penny a day pension’ for every day that they served when it was introduced in 1917.

As mentioned, the 25th Field Ambulance had a particularly strong link to the Camborne/Redruth area of west Cornwall.

When war broke out in 1914, a group of St Johns Ambulance men from Dolcoath mine (between the two towns) signed up to go out to the Front. They were led by a local doctor, William Blackwood. From Camborne, he was well liked and with his men he saw the most terrible battles of a terrible war – including Neuve Chapelle, the Somme and Passchendaele. They served there throughout the war, were captured by the Germans in spring 1918, and returned home in 1919.

Dr Blackwood (1879-1960) ended the war as a Lieutenant Colonel and was awarded the Distinguished Service Order (DSO) with a bar. In WWI, 9,881 DSOs were awarded but only 768 with an extra bar. Returning to his practice as a doctor in Camborne, following his passing he was buried in Camborne graveyard, a simple inscription on the headstone reading ‘His Duty Done’. We would all second that, and to all who served with him. And ‘yes’, we will remember them.

Dr William Blackwood – he is also pictured as a young man in the team photograph, sat in the middle of the second row.

My thanks are expressed to Susan Roberts, a Director of ‘Bridging Arts’ who is also a daughter of former Camborne RFC and Cornwall President David Roberts.