Some of you will recall that a few weeks back I had received communication from Mike May, a writer from the United States who is also a former rugby player.

Mike was ‘touching base’ because his dad Chris May played for the Pirates in the club’s first ever game and into the early 1950s before emigrating to America in 1953. Chris also played for Cornwall.

One of Chris’s highlights was the time he played for the Pirates against Harlequins in February 1952. However, it is now taking a closer look at the match programme which provides added interest. 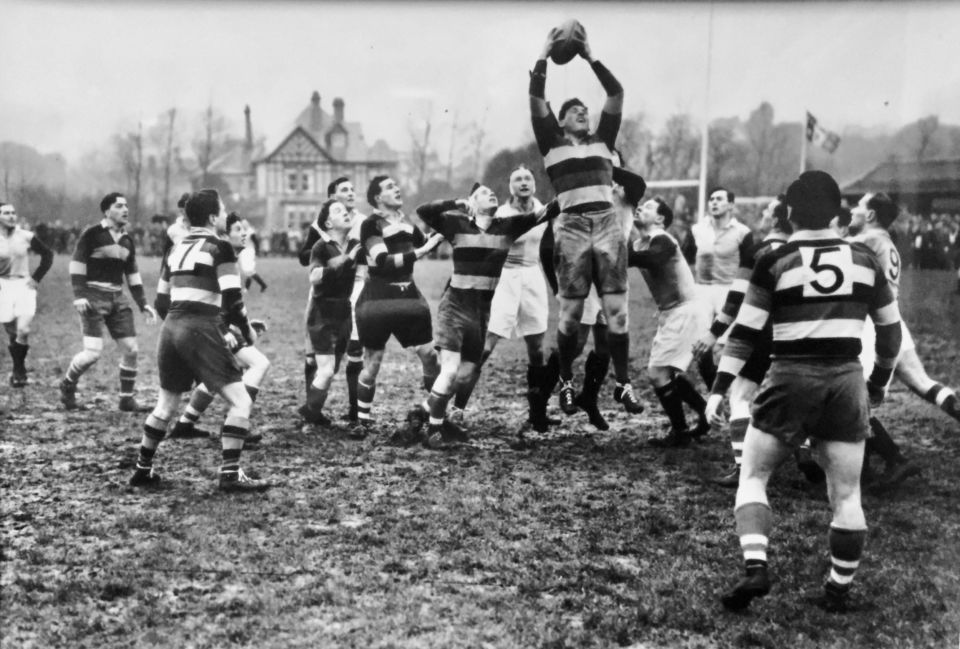 Within a few seasons, membership of the Supporters Club totalled 1300, and 2000 programmes would be printed for matches against certain top teams. It was even necessary to have 1000 for fixtures against RNAS Culdrose!

Programmes of the day were small 8-page compilations which, besides the team line-ups, displayed adverts and programme notes written by the Ben Batten, who was a wonderful man. The notes for the Harlequins match programme reveal that there was no rugby the previous Saturday, games having been cancelled as a mark of respect ‘for our late King and as a silent token of sympathy for our new Queen, “God Bless Her.”

The notes also reveal that unlike other rugby football clubs about the country, the proper name for the visiting team was ‘The Harlequin Football Club’. Considered exceptional in many respects, their home ground was the finest in in England – Twickenham, with a second ground at Teddington.

Their traditional colours, too, were striking light blue, magenta, chocolate and French grey, reversed on back and sleeves, light green and back reversed. Another interesting snip of information revealed that several ‘Quins’ were Pirates too – brothers Nicky & John Williams, Pat Cleaver and Mike Jenkin having all worn both jerseys. 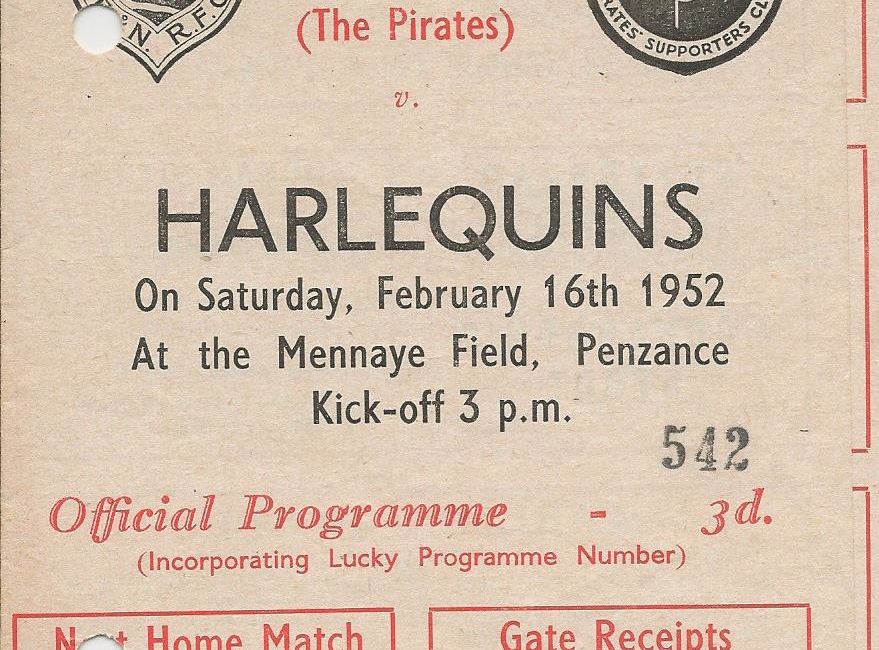 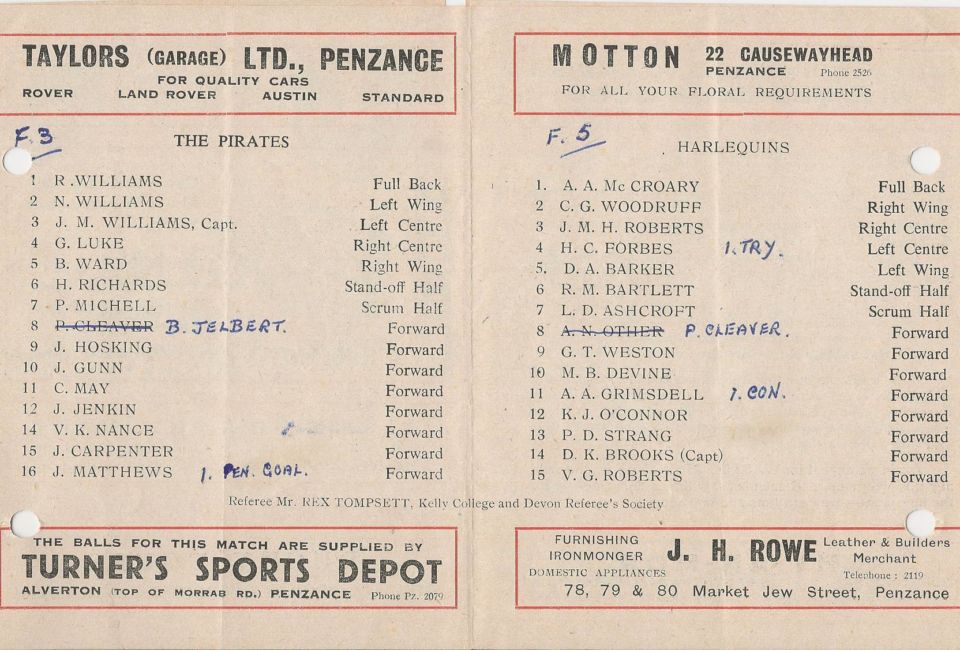 Now, let us take a close look at our team line-up, to which I have added a few notes about each:

Rodda Williams (Full-back – their shirts were numbered ‘1’ in those days) – A local schoolteacher, and later a captain and Chairman of the club, Rodda (along with Ben Jelbert also listed) was a major influence in creating my interest re the Pirates from a young age.

Nicky Williams (Wing) – Captained the side for two seasons in the late 1940s and also played for Cornwall.

John ‘Ginger’ Williams (Centre) – Brother of Nicky and captain of the side, he was capped twice by England and served as President of the Cornwall RFU (1991-94). He was also a ‘Barbarian’.

Gerald Luke (Centre) – Another very fine player, Gerald had been a schoolboy international who also later had a full England trial. He captained the club in 1962/63 and made 40 appearances for Cornwall.

Barneslie Ward (Wing) – As a Scillonian, Barneslie could be dubbed as one of our first ‘overseas’ players, who would travel to and from the Isles of Scilly aboard De Haviland Dragon Rapides Aircraft that flew between Land’s End and Scilly.

Harvey Richards (Fly half) – One of the highly regarded Pirates who played in our first ever game and captained our side so successfully in 1952-53. He also served the Pirates as Chairman and was a President of the Cornwall RFU.

Peter Michell – (Scrum half) – Besides skippering the Pirates for three seasons and captaining Cornwall, Peter led the Cornwall & Devon team that played the Springboks in 1960-61, plus he played for the S&SW Counties against the All Blacks in 1963-64.

Ben Jelbert (Prop) – As previously mentioned, gentleman Ben had a major influence on me Pirates-wise. He was a schoolteacher, as was Rodda, at St. Paul’s CP School. He also coached the club’s Mounts Bay Colts Team.

Jimmy Hosking (Hooker) – Jimmy ‘Ock’ was our first player to make 500 appearances for the club. He also played five times for Cornwall (1957-64).

Jack Gunn (Prop) – Captain of the Pirates in 1955-56, Jack made over 300 appearances for the club and also played for Cornwall.
Chris May (Second row) – Not only featuring in our first ever game, which was against Guy’s Hospital on the 22nd September 1945, Chris was in the team that famously beat the might of Cardiff, 5-0, in 1950. He too played for Cornwall.

Jimmy Jenkin (Second row)) – A fine forward for the Pirates and Cornwall, Jimmy later captained the Pirates before a move saw him play rugby league alongside Graham Paul for Hull Kingston Rovers.

John MacG. K. Kendall-Carpenter (Lock) – A legendary figure, ‘Carps’ – as many will know – was an Oxford ‘Blue’ who played for Cornwall and England. He also later held various high offices, including as President of the RFU and being Chairman of the Organising Committee for the first ever Rugby World Cup.

Jim Matthews (Wing forward) – Jim, who had represented England Schoolboys as a youngster, played over 500 games for the Pirates. He also captained the side in 1958-59.

On the programme sheet readers will note there is no number ‘13’ listed, someone presumably being superstitious!

As for the Harlequins team, they are happily listed 1 – 15, with some famous names among them. I have not elaborated on each individual player however the following provides interest:

David Brooks and Alan Grimsdell would both later become Presidents of the RFU. David also managed the British Lions on their tour to South Africa in 1968.

Ricky Bartlett played for England and is a grandfather to Bar Bartlett who played for the Pirates a couple of seasons back. 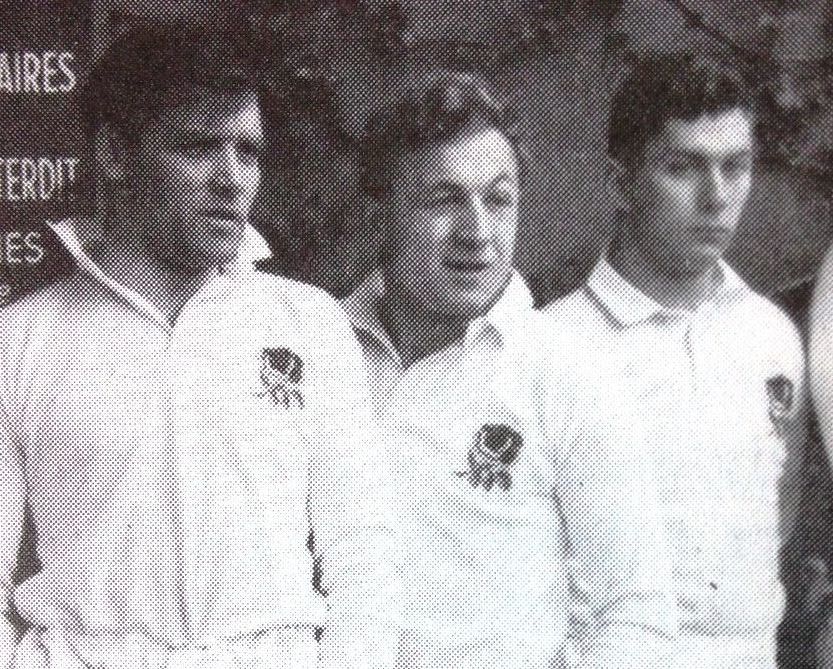 Pat Cleaver – Played for the Pirates and Cornwall, and for the Army.

Vic Roberts was one of Cornwall’s greatest ever players, who also played for Penryn, Cornwall and the British Lions. 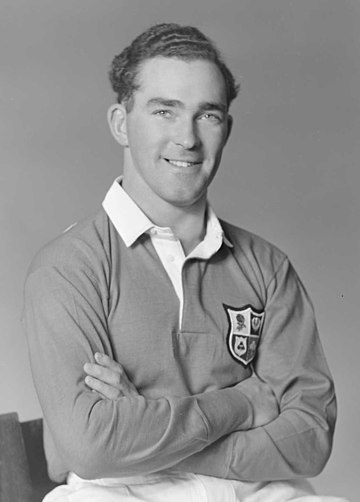 And who were the points scorers in the match? For the Pirates it was Jim Matthews who kicked a penalty goal, whilst for the visiting Quins centre HC Forbes crossed for a try converted by Alan Grimsdell.