December 1981 will forever remain in the memories of numerous people in Penwith and beyond. Looking at my diary – I worked for JH Bennetts Ltd (Shipbrokers and Lloyds Agents) back in those days – the month started routinely, my opening line reading ‘The Dutch salvage tug “Noord Holland” is still in the bay on station’ and it then mentioning other work and rugby club needs, and evening singing rehearsals for one of mother’s shows that was due to take place at St. John’s Hall.

On Thursday 10th December I mention the “Noord Holland” once more, as it sticks in my mind how calm and quiet the bay was, when during the evening I boarded the pilot boat to attend to certain work requirements for the tug at anchor in the bay. How, of course, sea conditions can change, and this was certainly the case come Saturday the 19th December. I further recall it being very calm again on the Friday and clearly remember a visit to the dentist, but the Saturday – that would be different. Playing rugby for the Pirates 2nds in the afternoon against Falmouth Reserves on the Mennaye Field, my diary says the game was a very good one but played in a difficult wind.

That evening I took my wife-to-be Sally out, and after dropping her to Madron arrived home at 3am on Sunday morning and was later awoken at 0915 by a telephone call from Graham Kent of the Pentrea Hotel. Graham broke the news to me that the Penlee Lifeboat “Solomon Browne” had sunk the previous evening with all eight crew lost. They were apparently going to the aid on the mv “Union Star” in trouble off Tater Dhu, and eight people aboard that vessel also perished. I was stunned, as this was a major tragedy, and my immediate reaction was to go to the office where an RNLI operations centre was set up. Dr. Leslie was the first person I remember seeing, and I stayed all day manning the phone and working until 10pm.

Come Monday it was no surprise that news of the tragedy spread throughout Britain and indeed many parts of the world. Only two bodies of the lifeboat crew had been recovered – Trevelyan Richards the coxswain, and second mechanic Nigel Brockman. Money for dependants through the official ‘Penlee Lifeboat Disaster Fund’ poured in by the thousands. My diary confirms that four of the vessel’s crew had been recovered and there was personal admiration expressed for Del (Johnson), Dr. Leslie and Mike Sutherland for the strength they showed, despite being naturally deeply upset, to keep things going with a tremendous amount of help from many different people.

In the days that followed it continued to be busy and on Christmas Eve I attended separate and packed funeral services at Paul Church for Trevelyan and Nigel.

On Tuesday 29th December three relatives of crew members aboard the “Union Star” visited the office. They were the brothers of Captain Moreton and Chief Whittaker and also a Mr. Brown whose two daughters and his former wife had died in the tragedy. The three went out in the pilot boat and placed wreaths on the water off Tater Dhu.

Come Wednesday the rugby community locally showed their response. In liaison with Mike Jenkin, Jack Tonkin (our President) and others we had arranged that a match take place between Cornwall and a Pirates President’s XV. Before the game everyone stood for a minute’s silence and Cornwall’s secretary Bill Bishop then kicked the game off. Among the spectators were relatives of the lost Penlee men. John Blewett, a member of the crew, whose funeral took place the following day, had played for the Pirates and had skippered the third team for several seasons.
The fact that the county won 30-23 mattered not, as more importantly a worthy sum of £1,100 was raised for the disaster fund.

The response by the rugby community was admirable, including that of the then touring ‘Wallabies’. Only a few weeks earlier their manager Sir Nicholas Shehadie had visited our clubhouse along with a number of tourists. Nick had first visited as a player back in 1947 and among those he brought with him in 1981 was the Australian team’s skipper, Mark Loane. In response to the disaster appeal Mark sent his tour blazer for funds to be suitably raised. This was organised and we were fortunate to keep the blazer, which is still prominently on display in our clubhouse.

Everyone admired the immense courage shown by the crew of the “Solomon Browne”, and they’ll never be forgotten. 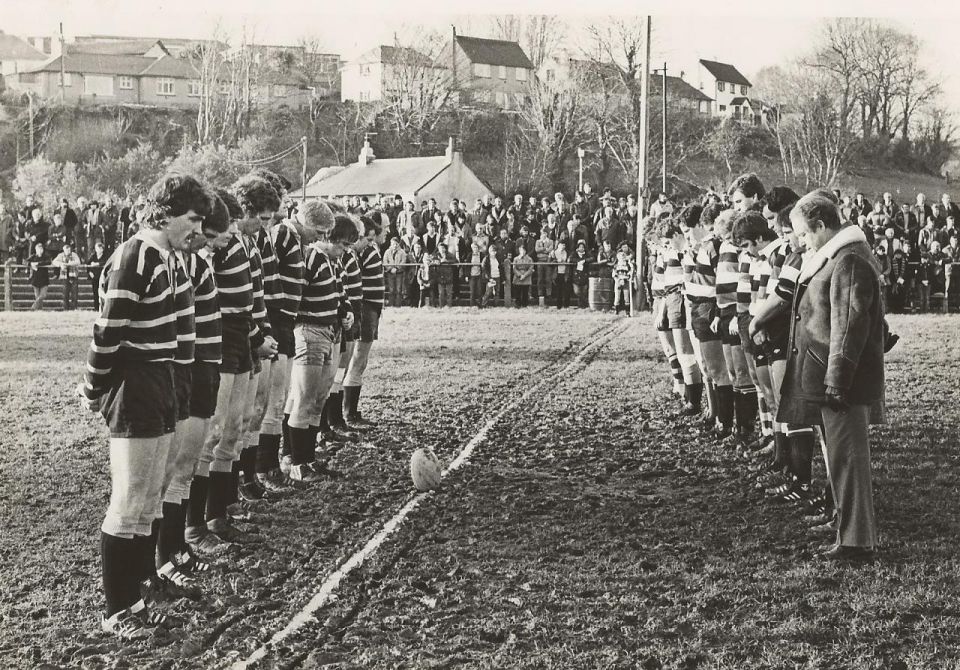